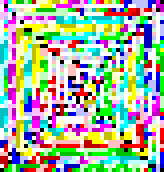 25
Hiding information in Cats
21
Pixel art, episode 2: Display the map 1-1 of Super Mario Bros
58
i love yOu i lOve you i love yOu!
26
Downgoat-ify Animals!
7
Demonstrate a lower bound for the Ramsey number R(4,4)
10
The Lonely Islands
16
Program my autodialer
17
Stacked digit staircases
9
Sub-pixel Zooming
7
Is this stack of CNN layers valid?