The task is to convert a positive integer into Suzhou numerals.

I'll bet there's an easier way to do this. Use gsub to get the alternating numeric positions.

Match either two digits 1-3 or any other digit.

Replace the first character of each match with its Suzhou.

Split the input into individual digits or pairs of digits if they are both 1-3.

Replace the first character of each line with its Suzhou.

Join the lines back together and replace any remaining digits with horizontal Suzhou.

-7 bytes thanks to Grimy

Saved 6 bytes thanks to @ShieruAsakoto

Takes input as a string.

mypetlion reminded me of a trivial golf. -4 bytes.

All octal escapes can be replaced by the equivalent single-byte characters (and are counted as one byte each), but used for readability and because otherwise it breaks TIO and SE with invalid UTF-8.

An encoding-unaware compiler is both a blessing and a curse.

Explanation: First of all - I'm using char for all variables to make it short.

The rest is pretty much iterating over the provided number, which is expressed as a string.

When writing to the terminal, I'm using the input number value (so the character - 48 in ASCII), multiplied by 3, because all these characters are 3 bytes long in UTF-8. The 'string' being printed is always 3 bytes long - so one real character.

Variables c and d are just 'shortcuts' to current and next input character(number).

Variable f holds 0 or 27 - it says if the next 1/2/3 character should be shifted to alternative one - 27 is the offset between regular and alternative character in the array.

Could be rewritten as:

Maybe there are some bytes to shave off, but I'm no longer able to find anything obvious.

-13 bytes thanks to Jo King

<\ scan with less-than. this turns runs of consecutive 1s into alternating 1s and 0s

juxtaposition is indexing, so use this as indices in...

0N 3#"〇一二三〤〥〦〧〨〩〡〢〣" the given string, split into a list of 3-byte strings. k is not unicode aware, so it sees only bytes

Note that on TIO this outputs the result in escaped form. In the normal Wolfram front end, it will look like this: 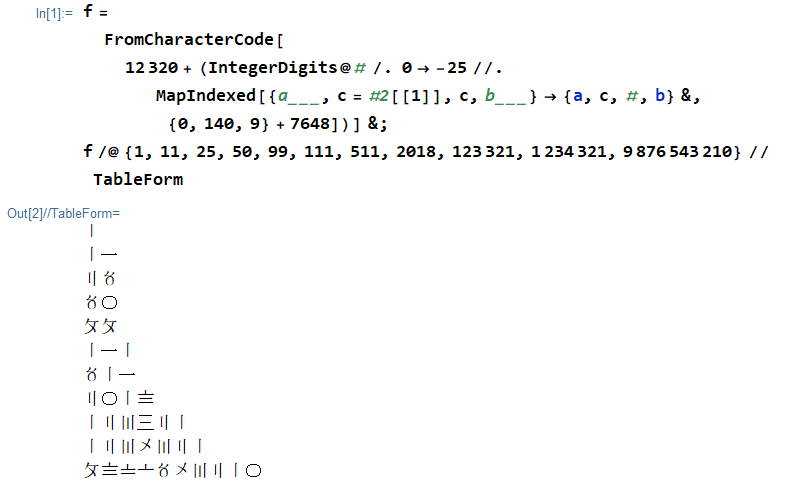 Saved 17 bytes thanks to @Jo King

Takes input in the form of a List, and returns an IEnumerable. I don't know if this input/output is ok, so just let me know if it isn't.

How this works is that it transforms all the integers to their respective Suzhou numeral form, but only if variable b is true. b is inverted whenever we meet an integer that is one, two, or three, and set to true otherwise. If b is false, we turn the integer to one of the vertical numerals.

It's worth noting that TIO gives a different byte count than my preferred interpreter, but I see no reason not to trust the one that gives me a lower score.

An alternative approach in R. Makes use of some Perl-style Regex features (the last T param in substitution function stands for perl=TRUE).

First, we translate numerals to alphabetic characters a-j, then use Regex substitution to convert duplicate occurrences of bcd (formerly 123) to uppercase, and finally translate characters to Suzhou numerals with different handling of lowercase and uppercase letters.

Credit to J.Doe for the preparation of test cases, as these were taken from his answer.

zruFzruF
5955 bronze badges
\$\endgroup\$
2
Add a comment  |
Welcome to Code Golf and Coding Challenges Stack Exchange! This is a site for recreational programming competitions, not general programming questions. Challenges must have an objective scoring criterion, and it is highly recommended to first post proposed challenges in the Sandbox.

19
Hashiwokakero: Build bridges!
9
Counting rods; count your rods
6
Invent your own Unicode 7.0.0 encoding (as efficient as possible)
6
Implement an encoder for RFC 1924 IPv6 Addresses
17
Fibonacci’s sexagesimals
17
Integer goes back and forth through time
13
True color code
21
Stroke Count of a Chinese Numeral