Input is in this format:

thetextitself: The text that should be rendered from the image.

image: The image filename. Implementation may vary; it could be either the filename from your computer, an image URL, or something else, as long as it's possible to use any picture.

rowwidth: How many characters a row of characters contains in the image?

xoffset: The starting x coordinate of the character table.

yoffset: The starting y coordinate of the character table.

xgap: The horizontal gap between characters.

ygap: The vertical gap between characters.

thetextitself: The text to render. The previous parameters are used to find the characters. It's at the end, so that any space included doesn't clash with the next parameter.

So, the appropriate input for this image 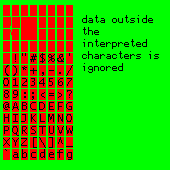 which would render as

. The exact pixel colors are preserved.

Word wrapping is not needed, but if you use word wrapping, there must be at least 16 characters of horizontal space.

-10 bytes if the code renders Microsoft Windows newlines (U+000D000A) correctly (extends the output image height and jumps to the beginning of the last line).

The code must support Unicode characters up to U+FFFF. If the code allows for characters above, -10 bytes.

, so the lowest code size wins.

Browse other questions tagged or ask your own question.