Yes, It's basically You're a Romanizer, Baby, but harder. like, way harder.

Learning Korean is HARD. at least for a person outside Asia. But they at least have the chance to learn, right?

What you must do

You will be given a Korean Statement. For example, 안녕하세요. You must convert the input to its Roman pronunciation. For the given example, the output can be annyeonghaseyo.

Now it gets technical

( - means no pronunciation or not used. you do not have to handle them.)

and Pronunciation for each vowels is as following.

Now its the real hard part 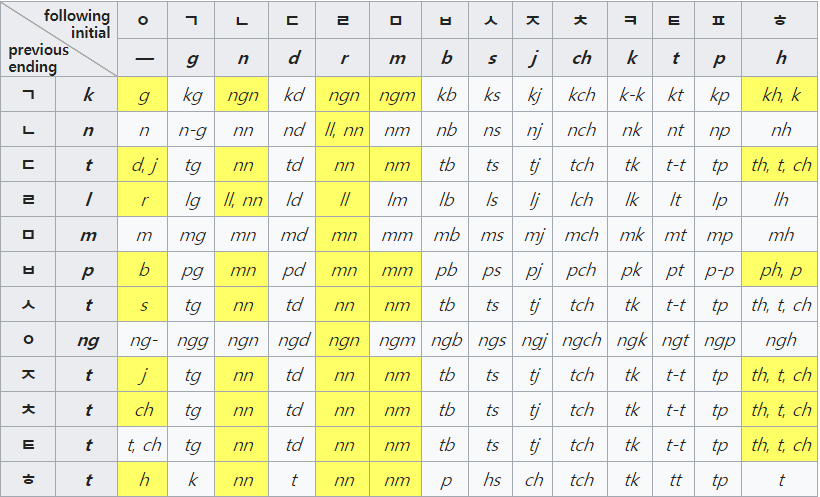 (You do not have to do the hyphen between pronunciations. Its unnecessary. If a cell has two or more pronunciations, choose one. If there's no ending consonant, use the original pronunciation.)

Example suggestion welcomed. You can get answers for your own inputs here. (The one in "General text", Revised is what I'm asking for)

Edit: Thanks to RootTwo for -6 bytes.

This is my first submission on CodeGolf, so I'm pretty sure there are better ways to golf it, but I thought I'd still post it, as nobody has mentioned the key idea yet, and this is still significantly shorter than other solutions.

The solution attempts to exploit the fact (which I learned from the original Japanese romanization challenge) that romanized character names are accessible through Python's unicodedata module. For Korean language, they take the form of HANGUL SYLLABLE <NAME>. Unfortunately, processing these names to meet the provided specification and to cover all the syllable combination scenarios still requires quite a bit of effort (and bytes).

The obtained character names list all consonants in their voiced form anywhere in the syllable, e.g. GGAGG for 깎, R/L are transcribed as intended (starting R, ending L), and CH is given as C (this actually saves us a bit of headache).

First of all, we strip off the HANGUL SYLLABLE part (first 16 chars), mark the syllable boundaries with -, and then apply a series of RegEx'es to do the conversions.

The first RegEx looks particularly nasty. What it basically does, is conversion of starting consonants into their ending equivalents (also removing the extra letter in case of double consonants), when they are not followed by a vowel, or for some letters - when they are preceded by h. The (?<!n) lookbehind prevents matching g which is part of ng, and (?!\\1) lookahead ensures that we don't convert, e.g., ssa to tsa.

The next few RegEx'es convert starting double consonants into their unvoiced equivalents. Here's where - separators also come in handy as they help discerning boundary collisions (g-g) from double consonants (gg). Now they can also be removed.

Next, we handle the remaining h+consonant combinations, l->r before vowels, and other special cases.

Finally, we restore c to ch, and resolve some other pecularities of our incoming char names, such as yi instead of ui and weo instead of wo.

I'm not an expert in Korean and can't comment much more, but this seems to pass all the tests posted in the task and on Github. Obviously, a few more bytes could be shaved off, if the output is acceptable in uppercase, as this is what we get from the name function.

This is an early attempt based on the current specs to get the ball rolling. It may require some fixing when the questions in the comments are addressed.

Once decompressed, the array V contains the following data:

We split each Hangul character into starting consonant, vowel and ending consonant. We append to the result:

This algorithm is crunched for purposes of the challenge; the trade-off being that the input is assumed to not contain any Latin alphabetic characters, nor to use characters outside the U+AC00 Hangul block as described in the challenge. Were this real code, I'd keep all the transforms in Jamo until the final pass.

I suppose I could throw some more brainpower at crunching those vowels and some of the repetitions in the lookup table, but this is as good as it gets from me today.

Make sure you can supply UTF-8 input to the Tcl interpreter. This is most easily accomplished with a simple UTF-8 text file. Alas, Tcl still does not default to UTF-8 by default; this cost me 33 bytes.

I know nothing about Korean language (except what little I have learned here). This is a first attempt, pending potential revision due to updates in the question specification.

And, about that, some additional information is useful. In particular, there is not a 1:1 correspondence between lead and tail consonants as seems to be suggested in the challenge. The following two sites helped immensely figuring that out:
• Wikipedia: Korean language, Hangul
• Wikipedia: Hangul Jamo (Unicode block)

Not the answer you're looking for? Browse other questions tagged code-golf natural-language or ask your own question.