Notice: I'm willing to give a bounty to any answer that I find interesting.

Your challenge is to design a Turing-complete one instruction set computer (OISC):

An OISC is an abstract machine that uses only one instruction – obviating the need for a machine language opcode. With a judicious choice for the single instruction and given infinite resources, an OISC is capable of being a universal computer in the same manner as traditional computers that have multiple instructions.

Here are some examples of single commands that make a Turing-complete OISC.

You must provide an interpretation or proof thereof

You must prove its Turing-completeness

You must include a formal proof that your language is Turing-complete. A simple way to do this is by proving that it can interpret or have the same behavior as another Turing-complete language. The most basic language to interpret would be Brainf**k.

Here is a list of very simple-to-implement Turing-complete languages.

However, you should upvote interesting, creative submissions, such as:

As with popularity-contest, the answer with the most votes wins! Good luck!

This OISC is based on Fokker's X-combinator which is defined as follows:

Internally XOISC has an (initially empty) stack, from there the instruction taking \$n\$ as an argument does the following:

Once there are no more instructions left XOISC will push all command-line arguments (if any) to the stack, for example:

Since the one instruction in XOISC takes only one argument (memory offset) there is no reason to even use a name for that instruction. So a valid source file will constitute solely of integers separated by newlines or whitespaces, like for example:

Let's take the above example (stack growing to the right):

For XOISC to be Turing complete we need to be able to translate any (valid) interleaving of parentheses and \$X\$ combinators. This is possible because when popping, applying and pushing it does so in a right-associative manner (function application is left-associative).

To translate any such \$X\$ expression there is an easy way to do so: Always pop as many elements such that from the beginning of the current level of parentheses there will only be one element left.

So we end up with a different (yet semantically equivalent) XOISC-program:

If we stay with this strategy we can easily transform any expression consisting of \$X\$ combinators to an XOISC program which only leaves a single function on the stack.

Given that the SKI-calculus is Turing complete, we need to show two things:

The first part - proving the three equalities in the introduction - is very tedious and space consuming, it's also not very interesting. So instead of putting it in this post, you can find here*.

The second part can be proven by structural induction, though it's easier to prove a slightly stronger statement: Namely, for any expression formed by \$X\$-combinators there is a program that will leave that expression as a single expression on the stack:

Since the untyped lambda calculus requires us to define our own data types for everything we want and this is cumbersome the interpreter is aware of Church numerals - this means when you supply inputs it will automatically transform numbers to their corresponding Church numeral.

As an example here's a program that multiplies two numbers: Try it online!

By default the interpreter checks if the output encodes an integer, if it does it will output the corresponding number (in addition to the result). For convenience there's the -b flag which tells the interpreter to try matching a boolean instead (see the last example).

Of course any low-level language needs an assembler that converts a high-level language to it, you can simply use any input (see above) and translate it to a XOISC-program by using the -a flag, try it online!**

** This results in a program that tests for primality, try it online!

Draw is an OISC acting on a 2D grid, marking squares in a manner similar to the Wang B-machine. However, to keep the language as simple and OISC-y as possible, all instructions (of which there are a grand total of one) mark the square just stepped on, and, in order to be able to halt, stepping on a marked square terminates the program.

The program consists of a sequence of lines containing a line identifier (arbitrary string not including # or whitespace), two integers (x and y) and two more line identifiers (a and b).

The program runs as follows:
Starting at the line identified as start with the pointer pointing to position (0, 0), move the pointer by the amount given by x and y and mark the square the pointer is now on (unless the square is already marked, in which case execution terminates). Then, jump to line a if at least one of the directly adjacent squares is also marked, and to line b otherwise.

Interpreters are encouraged to output the final result of the grid as some sort of image, canvas, etc.

Draw is Turing-complete as it is possible to compile a modified version (called Alternate) of a Minsky machine into the language.

Alternate acts similarly to a two-counter Minsky machine, but there is a large restriction placed on the commands: commands must alternate between targeting the first and second counter. To get around this modification, an additional command has been added: nop. This command doesn't change the targeted counter at all, which makes it possible to "pad" consecutive changes to one counter, satisfying the restriction outlined above. This also means that the register that is to be modified doesn't have to be given and, for any given instruction, can be directly inferred from the instructions from which execution can jump to it.

turns into this Alternate program:

This restriction is necessary due to the way that the eventual Draw program handles registers, which is to say that it doesn't differentiate between them at all. Instead, the Draw program simply copies the register that hasn't been changed by the preceding instruction, modifying it according to the instruction being executed.

Then, the Alternate program is directly translated into Draw as follows:

The program starts with this block.

inc, dec and nop are translated in almost the same way as each other. In all cases, there is no difference between changing the first or the second register (as explained above). Here is an increment, equivalent to inc 2:

The nop instruction can be translated as such:

This is a decrement:

i3_x refers to the instruction to be called if the counter is already 1.

Change labels appropriately and simply chain everything together. Doing this for the example from above gives the Draw program in the repository from above.

There are currently two interpreters, both written in Python. They can be found on Draw's GitHub repository.

The following image is an example for output from the second interpreter. Running the example program in the repository gives this (or similar): 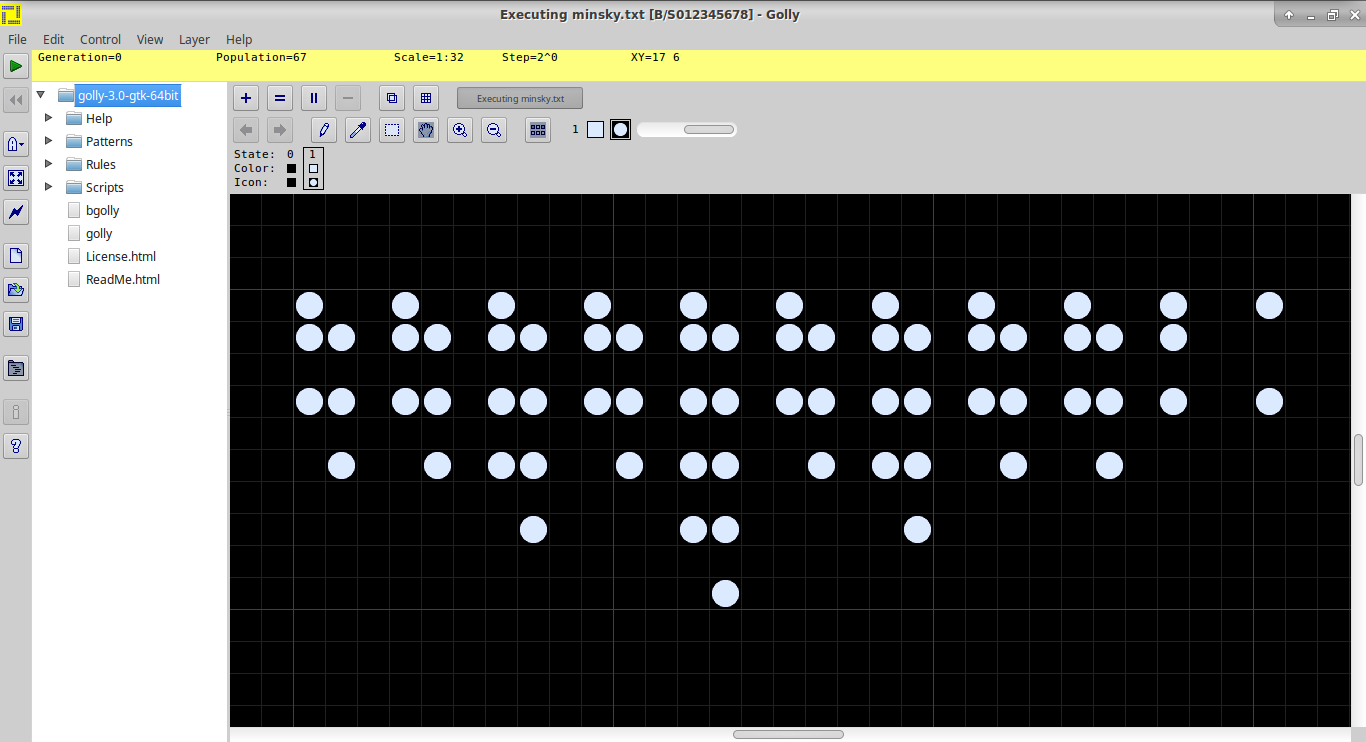 Memory is a map of tapes, where the keys are strings and values are arbitrary-sized integers.

Additionally, there is a set of labels, where the program can jump to.

There is a stack, which contains the operands, which are strings.

There is an offset, which controls where in the memory's tapes it can access.

-. First, it pops a string LABEL off the stack. If that LABEL is undefined as a label, it defines the label, and clears the source of that label (i.e. where it was pushed from) and the current instruction. Otherwise, it performs the following calculation, using the top two values, A and B:

Note that if there are excess arguments or insufficient arguments, the program will error out, showing the program's state.

The offset can be modified by accessing the value of ..

This sets variable i to 7, by incrementing 7 times.

This multiplies i+1 by the constant 2.

Disregarding C++'s int sizes (that is, assuming they are infinite), -3 is Turing Complete by reduction to 3-cell brainfuck. I can disregard this size because there can be written an interpreter for -3 on a computer with infinite memory that has arbitrarily-large cells.

I also believe that any BCT can be written as a -3 program.

Not the answer you're looking for? Browse other questions tagged popularity-contest language-design or ask your own question.