Write a Program in Disguise [closed]

The challenge is to create a program that solves any one of the HQ9+ problems while looking like another language.

Note: This is not a golf challenge.

This program is C but looks like (and runs as) Ruby. I also managed to throw some whitespace in there.

C prints its own source (not quite a quine unfortunately). Ruby prints 99 bottles of beer and whitespace says hello.

And since SO isn't very nice to ws here is a link.

A Golfscript quine that doubles as an HQ9+ program that prints the lyrics to 99 bottles of beer.

I know this isn't a golf challenge, but I couldn't resist the desire to answer this with one character.

This is a Perl program that prints Hello, World!.

Once you know what it does it might seem 'obvious' where it's hanging out, but this is a dupe. 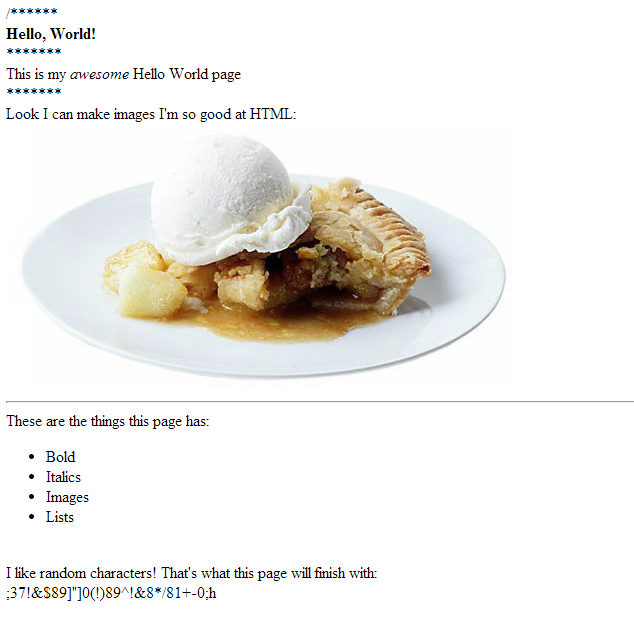 The following prints "Hello,World" (and a random table) in HTML and "Hello, World!" in Whitespace.

Abuse of STDERR redirection and quotes.

This runs and does things in all the languages listed, but looks like (slightly weird) PHP code.

In Bash, it merely prints "Hello, World!" (creating junk files along the way).

In HQ9+, it prints Hello World a few times (once for every occurence of H or h).

In Brainfuck, it is a "cat program" - it reads from standard input and outputs its input to standard output (><,[.,]>>).

In PHP, it prints some text:

>&_@ is disguised as harmless text substituting a curse, but it is in fact a redirection of STDERR to the file _@, so that Bash doesn't complain that what is not a valid program. It also eats the is a <?php bit and the first comment.

The first comment has a quote at the end (the quotes are there to prevent <?php from being run). echo "Hello, World!"; runs normally in both languages. The next comment serves to hide another quote, and there is an output redirection from STDERR to the file are, to eat the message " //: Is a directory".

Since the closing ?> is in quotes, it doesn't get run, and gets eaten along with the second comment and the bit after it.

Masquerades the output of a misconfigured web server, as (something that at first glance looks like) PHP+HTML mess.

This started out small but grew bigger as I tried to make it less obvious what it does (when evaluated as JS)... it might've become more obfuscated than the task intended, sorry about that. Anyway, the main thing I wanted to include was my trick for embedding (a subset of) HTML such that it's also valid JavaScript code, which is what you see at the end of the code.

Edit: oh, I should mention, when run in a website context the code alerts "hello world".

This looks like "Hello, World" in Python, but it's actually a quine written in PHP. It also works in JavaScript (SpiderMonkey), Lua, HQ9+, Perl, Perl 6 and Ruby, for bonus points.

I hope I'm not bending the rules too much :)

This looks like Python 2, and runs as Python 2, printing its own source in Python string literal form, as well as a code conciseness score of some kind! When run as ES6, however, it prints “Hello, world!”.

Not the answer you're looking for? Browse other questions tagged code-challenge polyglot or ask your own question.

25
Detect what programming language a snippet is

5
Interpreter for a 99 Bottles of Beer program
42
99 Bottles of beer, 99 languages
28
Write a C / C++ Polyglot
13
A Program that Prints Programs
10
Write a Semiquine
57
Determine your language's version
14
Inspired by HQ9+: 4-Behavior Polyglot