Little Boxes on the Hillside

There's a satirical song called Little Boxes, originally by Malvina Reynolds, about suburban sprawl that has lyrics as follows:

Your job here is, given an integer input n>1 that represents the size of the house, output the four "little boxes" using the following colors (in 0xRRGGBB notation):

If your particular console doesn't have these exact colors, you may use the closest available (e.g., ANSI escape codes).

The houses are constructed with n _ representing the floor and roofline. They are surrounded by n/2 (round-up) | characters representing the walls. The roofs are always 2 high and are two / on the left edge, two \ on the right edge, and n-2 - representing the roof peak. As the houses get larger, the comparative size of the roof gets smaller; this is intended.

Thus given an input of 7, output four houses of size 7 as described above, with the first one in green, the second in pink (magenta), the third in blue, and the fourth in yellow. Output of the colors in that order is important.

Make sure to open the console of your browser to get the colored output.

Anonymous VBE immediate window function that takes input from A1 and outputs to the range A2:A5 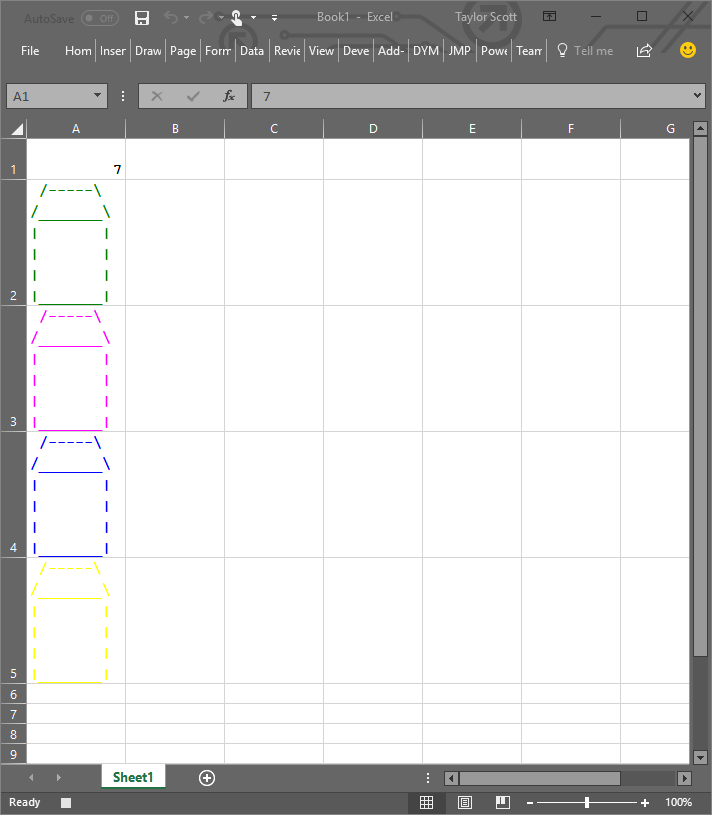 Try it (Open your browser's console before hitting "Run").

Thanks to ETH for helping me to test this last night while I was working it up on my phone.

Implicit input of integer U

First we build an array of 3-digit hex colours to map over. The charcode of ² is 178 so 3#² gives us 3178. We convert that to a base-2 string with ¤ and then replace all occurrences of 1 with f. ò3 splits the string into an array of strings of length 3 and w reverses that array.
(I need to figure out a way to shorten that, somehow.)

The second string is constructed using i to prepend X with the compressed string color:#.

The %c tells the console to use the second string as CSS. The top line of the house is built by repeating (ç) the - character U times and then slicing that from the second element (0-indexed) with ¤. The braces act as a shortcut, of sorts, for string concatenation.

The second line is built in a similar way, this time repeating the _ character U times.

The body of the house is built by first repeating the | character twice with ² and then inserting a space repeated U times into that string at index 1. The resulting string is then prepended to a newline (R) and that string is repeated U/2-0.5 times.

Finally, the last line is built in the same way as the second.

An anonymous function that takes input as an integer, n and outputs 4 colored homes to the terminal.

The lack of a dedicated string repeating or replacement function in yabsic really hurts this response.

This version requires graphics mode and thus does not work on TIO.

The input value for the below is n=7. 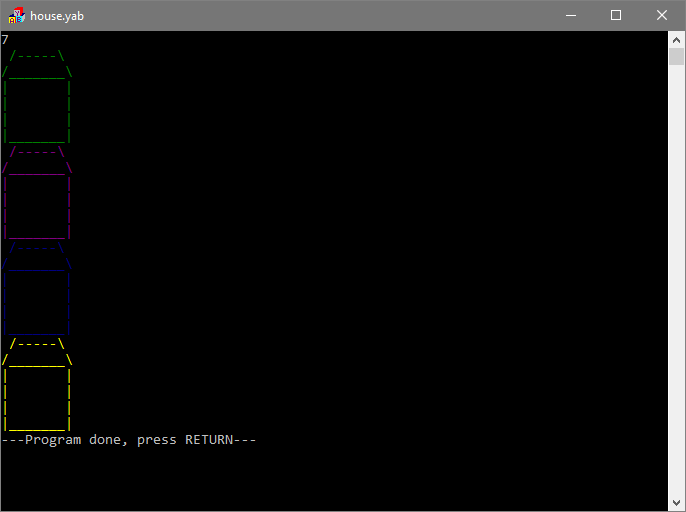 Another one which is also 115 bytes:

Not the answer you're looking for? Browse other questions tagged code-golf ascii-art graphical-output or ask your own question.