This question is inspired by this answer. Coincidentally, I used to use Ethiopian Multiplication when I was a kid, but had never known the name of the method until recently.

Ethiopian multiplication is a method of multiplying integers using only addition, doubling, and halving.

Strike-out rows whose first cell is even, we'll do this by encasing those numbers on the right in square brackets:

Sum the remaining numbers in the right-hand column:

Golf code that takes two numbers between 1 and 1000 and perform the same layout and algorithm, displaying the product below.

Input Method: However you choose...

Please note the alignment of the digits. This is most important in the layout. Also note that the double line laid out by equal signs must be two characters longer than the overall answer and must be centre justified.

How will you be testing this? By providing a run of your program using two numbers. These numbers can be extracted from your user ID number (this can be obtained by hovering your cursor over your avatar on the top window). Take your number and take the last three digits, this will be number B, take whatever else remains at the front, that will be number A. Then test for A times B.

No native multiplication operators permitted save for in the use of "doubling", as per mentioned in the algorithm. In other words, if you're using an operator like *, it can only be used for multiplying by 2 only.

Entries that do not adhere to this will not be considered and the user will be escorted off the premises with a cardboard box full of their belongings. Each entry will have code, plus the test based on your user ID number.

This is code golf. Shortest number of bytes will receive the prize, glory and admiration of their peers... (And maybe a Lamborghini... I said "maybe"!)

Repeats while q is nonzero.

Wrap q in padding and append it to the list t.

Wrap h either in padding or [] depending on whether q is odd, and append it to the list u.

Add h to itself.

Append a suitable string of = signs to the list u.

Append the padded sum s to the list u.

Rotate the list t by 180° and print it up-side down, thus right-justifying it.

Move the cursor so that when u is right-justified its top left corner lines up with the top-right corner we just reached, and print u right-justified.

Mostly a problem of output formatting

Compilation with MSVC requires to add #pragma warning(disable:4996) in order to use sprintf

Testing with my PPCG ID :

It respects the rules, digit are aligned, and the equal signs will always be 2 char larger than the final number. Example with 17 x 34 =>

Better respect of display, note there is a trailing space character

The ! operator creates the two lists, ? computes the product. % and # are used for the ascii layout.

This will compile with warnings as C89, & I don't believe it's valid C99, but it ends up being smaller than HatsuPointerKun's version, as it saves bytes by ommitting #include's, not using dynamic lengths to printf as they're unneeded, & using log10() to calculate the number of ='s needed:

saved 11 bytes by changing to a do...while() loop & moving the printf into the loop from a macro. Also should work correctly if a=1.

Saved 26 bytes with some printf trickery.

An anonymous VBE immediate window function that takes input from range [A1:B1] and outputs to the console.

An anonymous worksheet function that takes no input and outputs as plain text to the calling cell. Output is best viewed with word wrapping, a wide column width, and a monospace font on the calling cell. 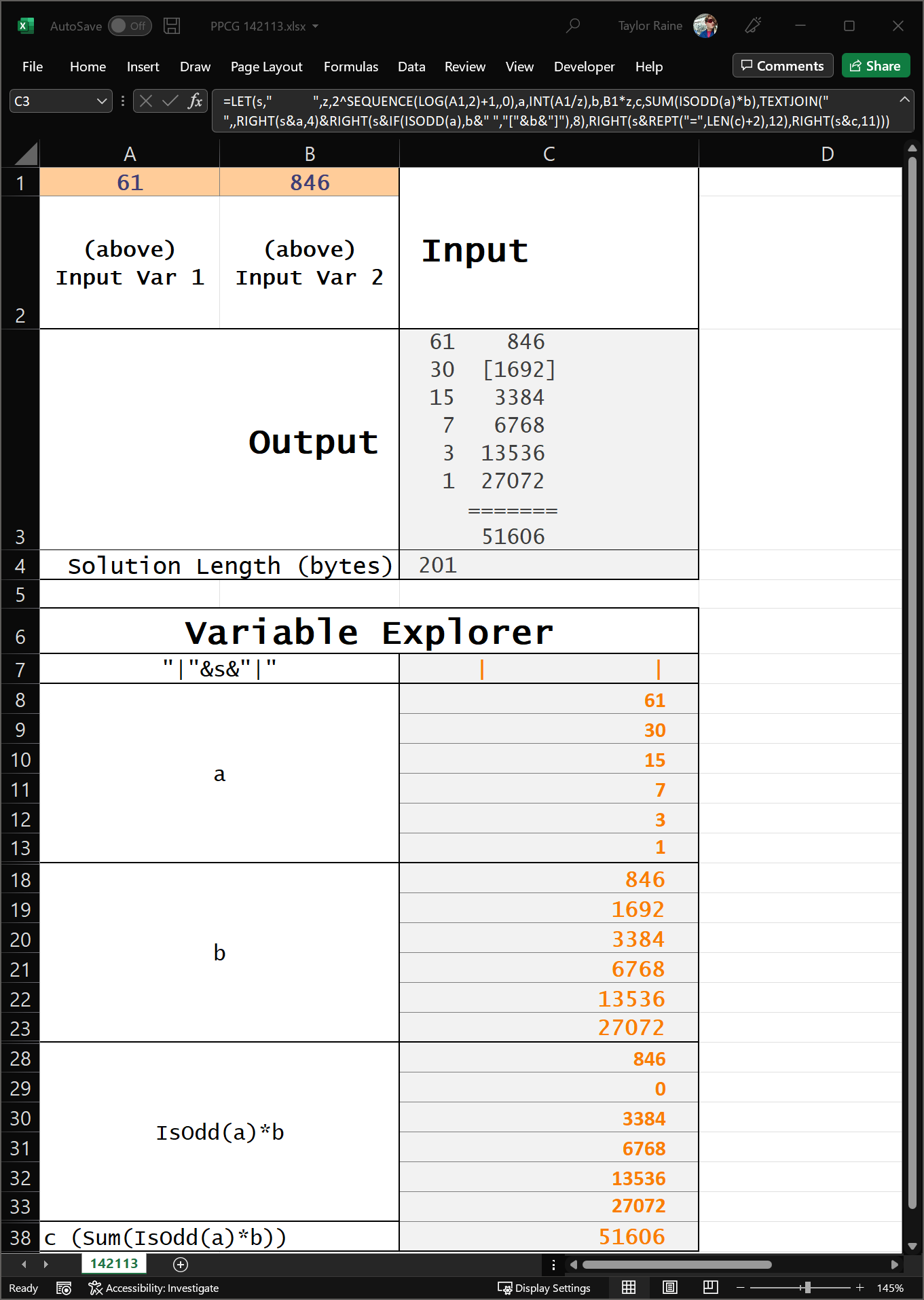 Not the answer you're looking for? Browse other questions tagged code-golf math ascii-art algorithm or ask your own question.