Given a date written in any (must handle all in the same program) of the following formats, parse it into a valid yyyy/mm/dd date.

If you can manage to also allow the input formats of The Fourteenth of March, 2016 or March the Fourteenth, 2016 you may take an extra 20 bytes off your code with any final byte counts less than 1 resulting in 1.

Here are the full written numbers for each of the days to avoid any confusion on spelling.

I don't know of an online interpreter for Rails, but here is a screenshot demonstrating this proc 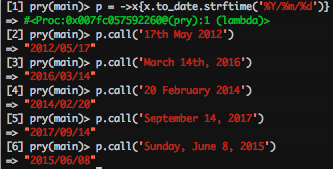 Takes input as a string. Uses a -replace to get rid of junk, then uses the built-in Get-Date command with the -format flag to specify the required yyyy/MM/dd format. That string is left on the pipeline and output is implicit.

Saved two bytes thanks to Mr Xcoder. Saved a huge chunk thanks to TessellatingHeckler's regex golfing.

The date check was really expensive: I had to disassemble the date before using a builtin, then try and error on the month name.

Saved 13 bytes thanks to Jonathan Allan

Does not support bonus dates

Important note: it was shorter to also validate the day of week instead of ditching it, so that validation is included!

I haven't tried with SimpleDateFormat beyond the obvious cases which all accepted dates like 30 February. So I had to ditch it and I used Java 8's DateTimeFormatter.

Not the answer you're looking for? Browse other questions tagged code-golf string date or ask your own question.

9
What year is it?
31
Eternal 2014 — PCG.SE New Year’s Puzzle 2015
16
Which Ubuntu versions are supported?
7
Roman-style date formatting
15
Windows Error Boxes to the next level
12
Count how many months are having a full 31 days by counting knuckles
6
Digital Calendar
8
Is the date alphabetical?
17
Get the date of the nth day of week in a given year and month
6
Day of Week - Natural language processing and date parsing