Your challenge is to write a polyglot that works in different versions of your language. When run, it will always output the language version.

Your score will be the code length divided by the number of versions it works in. Lowest score wins, good luck!

Relies on the fact that Python 3+ uses float division by default, unlike Python 2, which uses floor division.

Note that most versions after 10 didn't include any new classes in java.util, so no further improvement is expected.

(For previous scores, check the history!)

Please note that the code part return v<9?"1."+v:v; (previously return(v<9?"1.":"")+v;) needs to be checked against any version between Java 1.0 and Java 1.3 included. I don't have any Java 1.3 or earlier installation at my disposal to actually test this syntax.

The Java versioning has a special history. All versions have historically been 1.x including 1.0. But... from Java 9 onwards and the JEP223, the version scheming has changed from using 1.x to x. That is the version as internally known. So we have the following table (put together with the Javadoc and Wikipedia):

This challenge entry matches the version column in the table above, which is what is contained in the system property "java.version".

The goal is to check from which version a class starts to exist, because Java deprecates code but never removes it. The code has been specifically written in Java 1.0 to be compatible with all the versions, again, because the JDK is (mostly) source forward compatible.

The implementation tries to find the shortest class names that each version introduced. Though, to gain bytes, it's needed to try and pick a common subpackage. So far I found the most efficient package is java.util because it contains several really short-named classes spread across all versions of Java.

Now, to find the actual version number, the class names are sorted by introducing version. Then I try to instanciate each class sequentially, and increment the array index. If the class exists, we skip to the next, otherwise we let the exception be caught by the try-block. When done, another exception is thrown because there are no more classes whose existence we need to check.

In any case, the thread will leave the try-block with an exception. That exception is not caught, but simply put on hold thanks to the finally-block, which in turn overrides the on-hold exception by actually returning a value which is "1."+v where v is the index used before. It also happens we made this index match the minor version number of Java.

An important part of the golf was to find the shortest new class name in the package java.util (or any children package) for each version. Here is the table I used to compute that cost.

If builtins were allowed:

-67 bytes (lol) thanks to NoOneIsHere.

All credit to Sp3000's amazing answer. The trailing newline is necessary.

Whee, that was fun to golf. This should work (yes, I installed every one of these versions), but I might've accidentally borked something. If anybody finds a bug, please let me know. 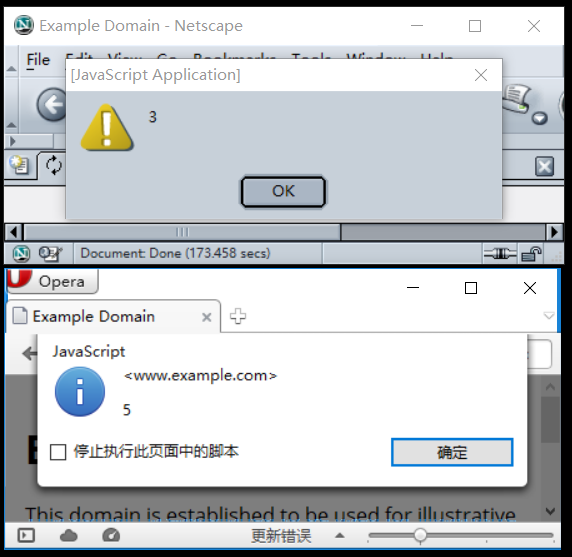 Save 1 byte thanks to GOTO 0

u and D having functionality on strings was only added in Actually (which is Seriously v2).

0o-style octal constants are new in ES6; ES5 casts the string to NaN which doesn't affect the result of the bitwise XOR.

May as well submit the solution with more versions, even if it does score slightly higher than the 2-version solution.

Checks for the presence of various methods in the Array, RegExp & String prototypes, negates them, giving a boolean, and subtracts that boolean from an initial value of 9. The multiplication of ![].map accounts for the fact that ES4 was abandoned.

The online version is longer because old PHP versions on the sandbox don't have short tags enabled.

Try it online :
Befunge 93
Befunge 98
Uses the Befunge 98-exclusive semicolon operator ("skip to next semicolon") to differentiate versions. Both will print "9". Befunge 93 will ignore the semicolons, subtract 5 from "8" (value left on top of the stack), print the resulting "3" and terminate. Befunge 98 on the other hand, will skip over, print "8" and terminate.

Works in every version your system has enough memory to run. Non-competing because it's lame. Valid per this meta post.

This function returns the current mode (default operand-size) as an integer in AL. Call it from C with signature uint8_t modedetect(void);. (Or more realistically, from machine code that's going to branch on the result using instruction encodings that decode the same in all modes.)

NASM machine-code + source listing (showing how it works in 16-bit mode, since BITS 16 tells NASM to assemble the source mnemonics for 16-bit mode.)

x86 machine code doesn't officially have version numbers, but I think this satisfies the intent of the question by having to produce specific numbers, rather than choosing what's most convenient (that only takes 7 bytes, see below).

Another interesting way to interpret the question would be to write 16-bit code to detect 8086 vs. 186 vs. 286 vs. 386, etc, as in this example, based on FLAGS and other behaviour, because each new "version" added new features (including instruction opcodes). But that's not what this answer does.

The original x86 CPU, Intel's 8086, only supported 16-bit machine code. 80386 introduced 32-bit machine code (usable in 32-bit protected mode, and later in compat mode under a 64-bit OS). AMD introduced 64-bit machine code, usable in long mode. These are versions of x86 machine language in the same sense that Python2 and Python3 are different language versions. They're mostly compatible, but with intentional changes. You can run 32 or 64-bit executables directly under a 64-bit OS kernel the same way you could run Python2 and Python3 programs.

Another difference between 16-bit and 32/64 is that addressing modes are encoded differently. e.g. lea eax, [rax+2] (8D 40 02) decodes as lea ax, [bx+si+0x2] in 16-bit mode. This is obviously difficult to use for code-golf, especially since e/rbx and e/rsi are call-preserved in many calling conventions.

Test code for 32 and 64-bit mode. (I haven't actually executed it in 16-bit mode, but the disassembly tells you how it will decode. I don't have a 16-bit emulator set up.)

This Linux program exits with exit-status = modedetect(), so run it as ./a.out; echo $?. Assemble and link it into a static binary, e.g.

There are no official version numbers for different x86 modes. I just like writing asm answers. I think it would violate the question's intent if I just called the modes 1,2,3, or 0,1,2, because the point is to force you to generate an inconvenient number. But if that was allowed:

Which decodes in 32-bit mode as

We loop through a bunch of modules that were introduced in different versions of python, and at the first error we quit and return the version. The gaps between major versions are filled in by repeatedly importing os. The test for python 1.5 relies on string.split not being present until 1.6.

Credit to Olivier Grégoire's answer for the idea of testing for new classes/modules in a loop.

I've now finally tested on all relevant versions of python...which required editing the 1.5 source code to get it to compile...

Perl 5 grep first op is always treated as a regex, not so in Perl 6.

This piece of code makes use of different interpretations of $'...' strings in each version of Bash.
Outputs the major version number -- and that's it.

This answer is halfly a guess; I only tested it in bash 4 and 3, but it should work on other versions too.

Let me know if it does / does not, I will try with other versions as soon as I have them available.

-1 char thanks to Jens.
-29 bytes thanks to Digital Trauma (the whole expr idea)!

Basically, the string consists of an 'a', an ogham space (3 bytes), an 'a', an escaped space character, and another 'a', and we just split it on whitespace, count how many strings we got, and print that.

The function eapply was introduced in R 2.0.0.

With indentation and line breaks:

Tested on one minor release of each major version since 10:

The idea is that every major release has added at least one new allowable argument for the function erlang:system_info, so let's try the ones in the list, count how many of them fail, and subtract the number of failures from 20, which is the current version.

Now, for some explanation.

Windows has had batch scripting since MS-DOS times and it hasn't changed much since then. However, when Windows NT came along, Microsoft changed the default interpreter for batch scripts, from COMMAND.COM to cmd.exe (now also allowing the extension .cmd as an alternative to the original .bat).

With that, they also implemented a few changes, such as the /i flag for ignoring string case on conditionals. That is, while Z==z is false, /i Z==z is true.

We exploit that DOS didn't have case insensitivy and compare uppercase Z with lowercase z. By using the /i flag, we end up with a Z==z (false) conditional on DOS and z==z (true) on NT.

Now, I realize that the challenge specifies that a version number should be printed. But, as far as I know, there is no 'version number' to batch scripting, so this is the closest I could get.

Tested on Windows 10, DOSBox and vDos: 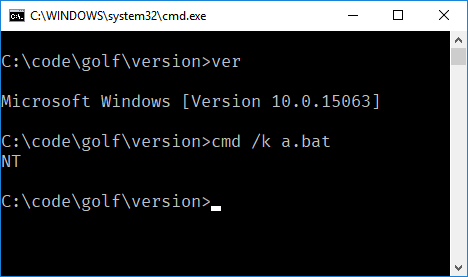 (run with cmd /k to prevend window closing on exit) 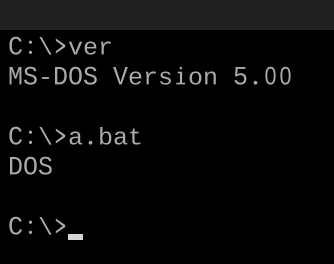 I'm sure there is a more efficient way, but the discrepancy between the DateRange output bit me in the butt recently, so I was set on using that.

As a follow up, someone could probably take advantage of Length@DateRange[{1}, {1}][[1]] evaluating to 1 in Mathematica versions 1-~8, but I didn't have time to incorporate that.

Based on the to_h method which was introduced on the Array class in Ruby 2.

Julia has changed the type name of the concrete and abstract String types in many versions.

This code in particular take advantage of:

Prior to v2, Japt used a customised RegEx syntax, so we can take advantage of that.

The number 1 as a string.

Japt 2 sees this as the RegEx /\S/g, which matches the 1. Japt 1 ignores the \ escape character and just sees the S, which is the Japt constant for a space character and, obviously, doesn't match the 1.

This works by exploiting the different behaviors of ?x between Ruby 1.x and 2.x. In Ruby 1.x, ?A (for example) returns 65 (the ASCII value of the character A), but in Ruby 2.0 it returns the one-character string "A".

The code above is equivalent to this:

Not the answer you're looking for? Browse other questions tagged code-golf code-challenge polyglot or ask your own question.

100
The Versatile Integer Printer
94
When was this language released?
24
Valid Through The Ages
41
Tips for golfing in 05AB1E
16
Write a java code to detect the JVM version

70
Write a polyglot that prints the language's name
8
Your Language in a Box
100
The Versatile Integer Printer
94
When was this language released?
8
Polyglot Interpreters
9
Encode a Lenguage