We have lots of horizontal axis for numbers, but I honestly think they're kind of boring. Your task today is to build me a portion of a diagonal axis between two distinct non-negative integers given as input.

How to build a diagonal axis?

Just for reference, but does not work on TIO:

Takes input as two command-line arguments, $a and $b, forms a range .. out of them, then loops |%{} over that range. Each iteration, we construct a string $z of a certain number of spaces " "*$l concatenated with our current number $_. We then pull out the .length of that, re-store it into $l for next time, and leave $z on the pipeline. Output is implicit.

This pretty much has to be suboptimal, my brain is clearly still in Monday mode. Pretty much just macro S printing spaces, and macro M doing the rest of the work. Register l restarts at zero spaces before running S, and compares against register k, which we always increment by the number of digits of top-of-stack.

Only issue is once you get past 100000, numbers are outputted in scientific notation (which I should probably change to always display in full form). The online syntax highlighter also dislikes "" but it is parsed correctly.

Here ^K is a literal vertical tab and control character. The xxd dump of this script is as follows - use xxd -r to regenerate the actual script:

Input range is given as two integers at the command-line.

Not sure if much of an explanation is needed here - seq simply does the counting (from a to b, passed in the $@ parameter), with -s specifying the separator as a vertical tab. This causes the next number to be printed after the previous one, down one line, as required.

Run with -nr or try them online.

Takes input in currying syntax with the smaller number first. Outputs the result to the page in HTML.

This newer solution has fewer bytes but slightly slower. SGN PI is 1, CODE "=" is 20 and NOT PI is 0; the PRINT TAB command does what you might expect, except a TAB in ZX81 land is 1 space; A is increased by the length of the I variable once converted to a string.

I'm using the most expensive methods here in terms of bytes (i.e., SGN PI is 1, and counts as two bytes in ZX81 land, whereas 1 counts as four bytes), so I could cut the byte count by increasing the typing and making the listing less readable, and slower.

The 'spacing' works by converting the I number to a string and taking the string literal length, using that in a FOR/NEXT loop as the destination [line 6]. X is the start number, and Y is the end number.

There are a few limitations to consider, such as only having a 32 columns display by default, and only allowing 22 rows without some POKEing. Also, the screen doesn't scroll when it is full unless you tell it to, with the command SCROLL. 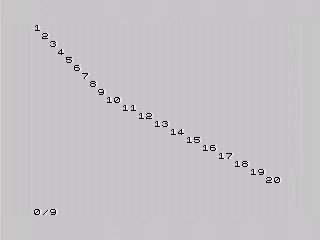 +3 bytes for -v. Not sure whether I actually need to add this for a function, but better to err on the side of caution

Not the answer you're looking for? Browse other questions tagged code-golf ascii-art number or ask your own question.

75
Diagonal Alphabet
25
Am I a Cullen Number?
11
Do we share the prime cluster?

30
Visual Long Multiplication
16
Build Me a Pyramid
15
Apples are falling down
15
Visualize a Difference Pyramid
20
Highlight the Bounding Box, Part I: Cartesian Grid
7
Identify the direction of lines in an ASCII-figure
39
Semi-Diagonal Alphabet
8
The Microwave Challenge
19
Count the lucky tickets within the given range
21
Rotate ASCII Art by 45 Degrees