BONUS: Can you solve it in O(n) time complexity and O(1) additional space complexity?

In case that all elements are unique, this returns 0 (undefined behavior).

Returns 0 if no input contains no duplicate, try it online!

Output is stored in Ans and is displayed at the end. Throws an error if there are no duplicates.

The old Tortoise and Hare (cycle detection) algorithm... using as many 1 byte opcodes as possible.

As a callable function, input pointer to list at [BX], output index in AL. 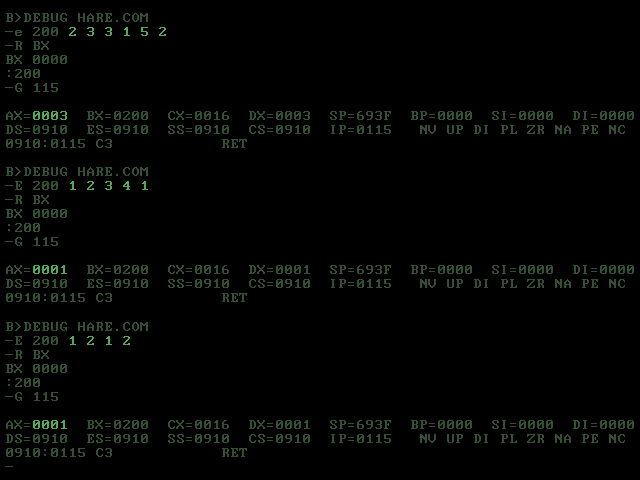 Uses another array to keep track of the already encountered values.

With thanks to LiefdeWen for the 89 bytes base code here, here's an further shortened version of that

We can dispense with the return -1 and length check as it's apparently OK to throw an exception if not found, so we just let the outer loop run off the end of the array. Some other whitespace changes, and jigging the declarations around to reduce the number of times we write "int" etc..

This does one pass of the list. Thus is O(n) For memory it stores a integer i, which has bits representing which numbers have already been visited. If a number has already been visited we output, otherwise we turn the bit on. If no matches are found we do nothing.

This makes a slight improvement over the naïve way which requires copying the list at the cost of O(n log n) memory.

Takes a space separated list of integers. returns i < n on a successful match and i == n on failure.

This algorithm leverages the fact that indexes are positive but numbers in javascript are signed. Also, zeros are not allowed input. As long as the array is not longer than 2^31, this solution will work. I double the use of the original array as my lookup array -- marking a visited number by switching the value at that index with its 2's compliment.

The main idea is to store each value we've encountered on the tape and then use the search command to check whether the current value has already been written to the tape. It's important here that the tape is initially completely filled with -1s.

I've got an alternative solution at the same byte count:

I also had a solution where I used the tape as a lookup table, storing at each index X whether X had already been seen in the sequence, but it ended up being a byte longer (it's conceptually easier, but moving the tape head to position X from an arbitrary positive position requires five bytes with q&[&]).

Oddly enough, despite Add++ having a deduplicate command, this doesn't use it. This exits with an error code of 1 when there is no duplicated element.

We start by removing any elements without more than one occurrence, in order to leave the stack with an array containing the original array, preserving order, without any elements which only occur once. This is done by the use of filtering by the dyadic function w:

We want this structure, called dyad-binding, due to the way the filter-keep quick, Þ, works in regard to non-monadic arguments. Here, its functional argument is w, a dyadic (two argument) function. This means that, instead of filtering over each element in the stack using w, it pops the top element of the stack, the list [a b c a c] in this case, and uses that as the right argument when filtering every other element.

So, for one iteration of w, the stack may look like this at the start of execution:

Then BF flattens the stack, and then we come to another dyadic quick: €. Again, the popping behaviour is simulated, and a is used as the left argument to the succeeding function, the equality operator in this case. This compares a with the elements of [a b c a c], yielding an array of 1s and 0s. By now, the stack looks something like this

Finally, s takes the sum, and 1< asserts that it is greater than 1. This essentailly counts the occurences of each element of the input in the input itself, and removes them if the count is only 1 i.e. the element isn't duplicated at some point.

After applying Þw to the input, the stack results in

We'll call this array A. The rest of the code is determining which of these remaining elements occurs for the second time first i.e. the actual task in the challenge.

Next, we want to perform k over the remaining list. In order to do this, with k being dyadic and taking A as its left argument. Again, we want to create the dyad-binding structure, but using the elements of A instead of the arguments. In a general case, if the stack looks like [a b c d e], where a - e are arbitrary pieces of data, the following code will convert that into a dyad-binding structure:

k is our main function to isolate the first deduplicated element. Here, we have our two arguments, I, the element in the array being iterated over, and A, our array containing the elements that occur more than once. The first part of the code, BF€=, identifies which elements of A are equal to I. Now, we generate the truthy indices - the indices of elements in A that are equal to I. There is a bug in ßE, causing it to start from 0 (corrected after the challenge was posted). However, as this means the first occurence if I will always be set to 0 because of this bug, and the offset of 1 doesn't change between elements, this means that we can avoid the lengthier dbLBc which is bug free. Let's use a as an example value for I. Now, our stack resembles

The first element is the 0-based index i, the second whether or not I = A[i]. Next, we remove the indexes where I ≠ A[i], by taking the product of each pair with B*, then taking the maximum value with MVcG. Finally, we push I to the stack and pair them as a list. With I as a, the final value returned is:

This process happens over each element of A, eventually leading to a series of paired lists of the highest index of the element of A in A itself. Finally we want to find the element which has the lowest first element, the element whose duplcicate appears first. Here, as Add++ doesn't have a builtin to get the first or last element of a list, we use our third helper function l:

While Add++ doesn't have a builtin for head of an array, it does have a minimum-by quick, ». We take the list which has the minimum return value when passed through the function l. This helper function unpacks its argument to the stack before performing any commands with the ~ command, then $ swaps them, so the index comes first and is the value returned. Essentially, we return the element with the smallest duplicated element.

Unfortunately, this returns the entire array, both the index and the element, rather than just the element, so we append a bU to unpack this array to the stack, returning only the last element of the pair - the first duplicated element.

Returns f in case the input has no duplicates. This is idiomatic for Factor rather than -1. Let me know if that's not allowed and I can fix it (i.e. make it much longer).

Takes the numbers as separate command-line arguments. Try it here! Or, here's a 15-byte equivalent in Pip Classic: Try it online!

This outputs the first duplicate or, if there are no duplicates, the first number in the list (because the indexing wraps around).

needs a fresh interpreter or I initialized to 0. Will error if there is no duplicates

No effort on bonus at all

Not the answer you're looking for? Browse other questions tagged code-golf array or ask your own question.

83
Tips for golfing in Haskell