When Fibonacci meets the Queens

The Fibonacci numbers are one of the more well-known sequences in mathematics, where each number is composed by adding the two previous numbers together. Below is a definition of the zero-indexed sequence:

The Fibonacci numbers can be used for a tiling of the plane, by using squares that are successive f(n) in size, and aligning their edges together. The tiling is done in a counter-clockwise fashion, by placing squares in the pattern "right-up-left-down" from the current square. An example of this partial tiling for f(8)=21, with the starting square highlighted in blue, is as follows: 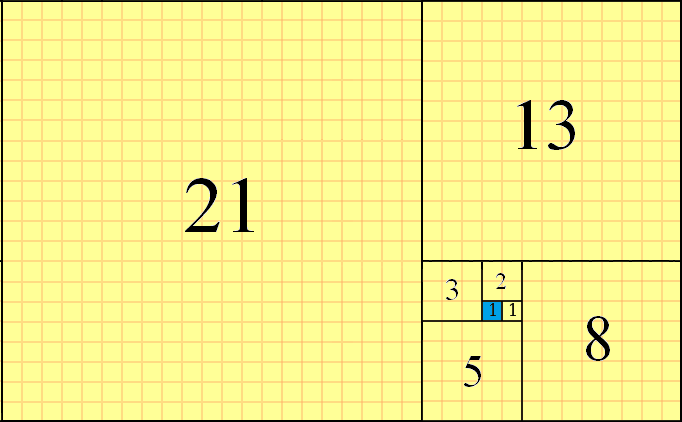 In the game of chess, the most powerful piece is the queen because it can move any number of spaces horizontally, vertically, or diagonally. In the below board diagram, the squares with a black circle show where the queen can move: 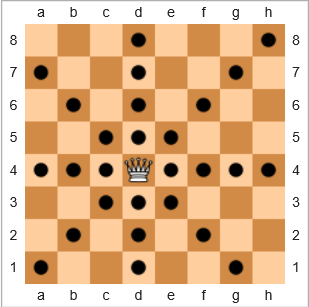 We'll define the term coverage as

The percentage of squares that the queen can move to versus the total number of squares, given the queen's particular position on an empty board, and including the queen's own starting position.

We're going to use the Fibonacci tiling demonstrated above as our chess board for this challenge. You'll be given two positive integers as input, n and x:

For example, here is an image of n = 8 (the same tiling as above) and x = 4 (corresponding to the f(4) = 3 square, shaded blue). By placing a queen one-at-a-time into each of those nine blue squares, the queens can (combined) cover every square that's shaded orange. The total coverage in this example is therefore 309/714 = 43.28%. 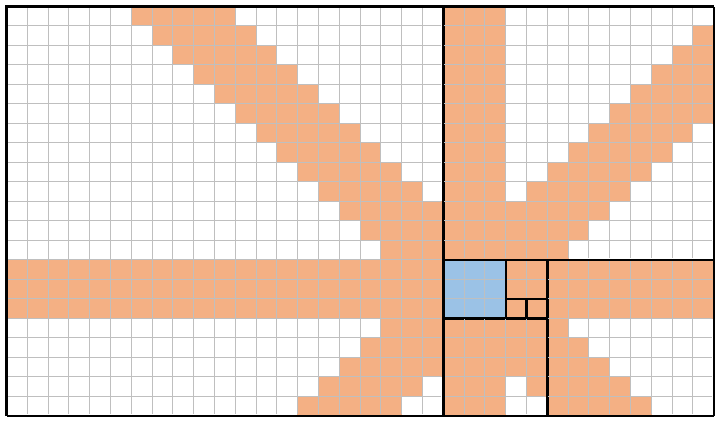 Given two such input numbers, you must output the coverage percentage, accurate to two decimal places. Please specify how your code handles rounding.

Simulation of the problem statement. I start by creating the grid, looping through each new fibonacci number to increase the square size. I store the index in each cell, so that it's easy to find where the queens will go in the next step.

Then, I find every cell that should have a queen in it, and mark each threatened square with a zero. I skip the cells where the queens are so that I don't have to worry about backtracking.

At the end, I count up the cells that are cleared, and the cells with queens, and then divide it by the total number of spaces. Multiply by 100 to get the percent, and round to the nearest two decimal places.

Defining a function that takes in both the tiling size n and the queen's fibonacci square number x. The ouput percentage is porperly rounded to two decimal places (in the footer, where all output is taking place).

f is a two-dimensional array containing the board information being initiated to 0. Then, the fibonacci chess board is calculated and populated with queens where queens shall be. Those queens are then moved to every place they can be moved; all positions are counted and printed as a percentage of the entire board.

A pretty nice challenge for APL. This is an infix function that takes x on its left and n on its right, and returns the string representation of the rounded percentage. A full program would be 59 bytes (though I don't like using that I/O format because writing tests is cumbersome):

Constructs a boolean matrix representing the grid in question where 1 means a queen, and counts all the cells that share their row, column, diagonal, or anti-diagonal with some 1 cell.

Basically, p[i] is a function of determining position of each square. And area is calculated by upper-level functions like RegionIntersection, RegionUnion, RegionMeasure

Not the answer you're looking for? Browse other questions tagged code-golf chess fibonacci or ask your own question.