Stream of Letters to Words

Given a string containing only letters (case-insensitive), split it into words of uniformly random lengths, using the distribution below, with the exception of the last word, which can be of any valid length (1-10). Your output is these words, as a space-separated string ("test te tests"), an array of strings (["test","te","tests"]), or any other similar output format.

Data roughly guessed from the fourth page, first figure of this paper.

Note that I created these by hand, so they may or may not follow the uniform distribution above.

Try it online! (the footer separates the resulting list of lists with spaces)

Uses all the percentages in the distribution rounded to their nearest integer (thus being within the 0.69% allowed thresholds).

*Takes the string as input and outputs an array of strings.

*The last element of the output may be an empty string.

Allright, this is my first attempt on code golf. Straight up with the code:

The second indent is by a tab char as you can see in my TIO version: Try it Online.

What I do is adding a space in the string according to the given distribution. I veryfied my distribution by using:

Which I think is correct enough. I then repeat that process of adding a space until the length of my string is succeeded. I also increment my position index by one after adding a space. I hope someone can help me golf this line out but I did not see how to get it out without falsifying the first space.

As I see my text I recognice that I have to learn alot about this Site. Could someone link me a guide how to use the Stackoverflow answer function in the comments so I can learn for my next posts.

Apperently while rereading my post I did figure out a way to get rid of the i+=1. So i saved 4 bytes by doing that. The new code looks like this:

I figured out that i can remove some linebreaks.

Edit: I modyfied my import and placed the definition of i inside the function.

Try it online! Hit Run a few times to see how it changes.

takes a string as input
outputs array of strings

Try it online! Link is to verbose version of code. Outputs a trailing space if the last word was the exact size randomly chosen.

Randomness is tricky in ><>: there's only one random instruction, x, which sets the fish's direction to either up, down, left or right. This is a complicated program, so here's a colour-coded diagram to help you: 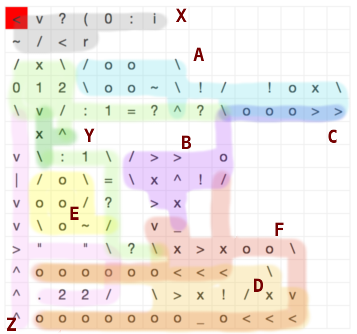 The fish starts at the grey bit of the code (X). This is fairly standard ><> code to read in all of the input. It gets more interesting, so let's move on.

Next, the fish comes to the light and dark green sections (Y). You may notice from the probability tree that the three major branches each sum to 1/3, and that each of these branches splits into a 2/3 sub-branch and a 1/3 sub-branch. The green sections of code cover these two levels of the tree. First, we pick a random number out of 0, 1, 2 with equal chance of each, in the top lobe of the light green bit. We can simulate a 1/3 chance using the four-way instruction x by cutting off one of the exits so that it just redirects the fish back to the x — then there are only three escape routes from the x, and by symmetry they have equal probabilities.

The next x, a little below this one, sends the fish to the ^ next to it with 2/3 chance — note that the fish wraps around if it swims left from the x — and down to a \ with 1/3 chance. The fish then swims along one of the two tails of the light green section. These tails are functionally the same: each checks if we pushed 0, 1 or 2 earlier, and branches out accordingly. And this completes the first two levels of the tree.

The next six sections (A–F), in essence, use more xs to branch the fish further, and then use some number of os to print a number of letters from the input. These sections range from straightforward (e.g. dark blue, C, which just prints three letters) to, well, not so straightforward (e.g. orange, D, which needs two xs to simulate a 3/8–5/8 split, printing letters in multiple stages). The details of these are left as an exercise. (I'm particularly pleased with yellow, E, which sends the fish in a loop-the-loop!)

After each of these branches, the fish ultimately reaches the pink section (Z). This draws all the branches back together, prints a space, then finally makes the fish jump to position (2,2) in the grid and start again at the first x.

In case the "it's complicated" explanation above doesn't convince you that this gives the correct probabilities, I also tested this on a length 65,000 input string (64 KiB, only 13 seconds in TIO!), and the resulting distribution of word lengths was

Not the answer you're looking for? Browse other questions tagged code-golf string natural-language or ask your own question.

17
Format a list of words
26
Matching Adjacent Words
26
What is the most frequent word?
20
Words that Contain Digits
38
Count to 20 with Words!
20
Spoonerise words... in Finnish
33
Pleasanortmanteaus
7
Evaluate Words Based on "Rules" (Skeptics.SE Crossover)
26
I before E, except after C
19
Find my Māori pronouns