One OEIS after another

As well, just a quick shout out to the top three answerers in terms of numbers of answers:

This is an answer chaining question that uses sequences from OEIS, and the length of the previous submission.

This answer chaining question will work in the following way:

The nth term of a sequence is the term n times after the first, working with the first value being the first value given on its OEIS page. In this question, we will use 0-indexing for these sequences. For example, with A000242 and n = 3, the correct result would be 25.

This is not a code-golf, so shortest code doesn't matter. But the length of your code does still have an impact. To prevent the duplication of sequences, your bytecount must be unique. This means that no other program submitted here can be the same length in bytes as yours.

After an answer has been posted and no new answers have been posted for more than a week, the answer before the last posted (the one who didn't break the chain) will win.

As with most answer-chaining questions, please format your answer like this

The Verilog module above calculates OEIS A001344.

The code below is the same code but prettified, and a testbench module added to allow you to run the code in a Verilog simulator such as modelsim.

I have verified inputs up to the 22nd element in the sequence, beyond which OEIS runs out of examples, and shortly afterwards the numbers start overflowing 100bit arithmetic. I believe that is allowed as per the rules about assuming input and output numbers will never overflow the language. Originally I had used 32bit arithmetic which caused overflow at 13, but without changing the byte count (just 3 numbers from 31 to 99) we can get up to 22-ish.

When simulating, the input number is clocked in on the rising edge. v may go low if it is going to take more than one clock cycle to calculate. Once v is high after the clock edge that loaded the number, the output r can be considered a valid number of the OEIS A001344 sequence.

The code is actually making use of the related OEIS sequence, A028387 which calculates n + (n+1)^2. By multiplying the n+1'th element of that sequence by n! we arrive at the A001344 sequence. All that is required is a little fiddling around with the value of n to make it 0-indexed as per the requirements and we have our result.

To do this in Verilog is a little bit of a pain as it requires a factorial. The simplest approach is to use an iterative approach over n clock cycles to calculate the factorial and output the final result.

I should probably point out that both the OEIS1344 module and its testbench are very naïve approaches to get the job done. But since joining PPCG I've wanted to be able to use Verilog in an answer, and I found a way to shoehorn it into this one.

The following is an example output from ModelSim:

The following is the testbench code: 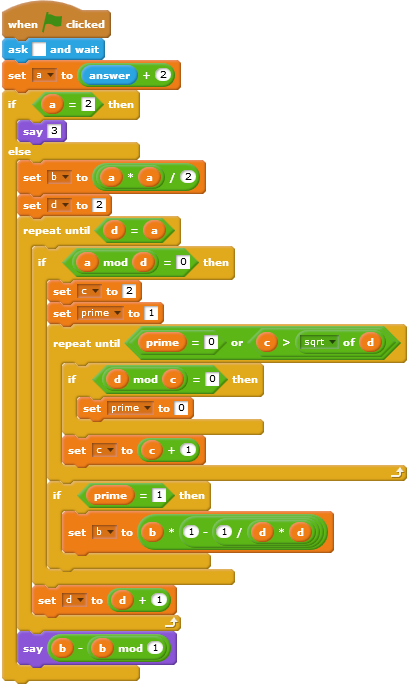 Or, when written as text in the ScratchBlocks2 format:

You're probably thinking "This is taken from the OEIS site!", but hold on. While checking Magma documentation, I found something interesting here. One of OEIS descriptions of this sequence is number of conjugacy classes of subgroups of symmetric group S_n, and the documentation speaks of a build-in! And it's a different one than the one used on OEIS SubgroupLattice(), this one is SubgroupClasses(). So it happens that both functions create the same amount of subgroups (possibly how the math of this works - I'm not sure), but SubgroupClasses() is actually THE correct way. Thus I felt that this answer is eligible.

You can try it here

Just paste the function and then call it by a000638(5); or any other number instead of 5 (note, anything higher than 11 will time out). You can also use this to output 11 first integers in the sequence:

COBOL was originally designed with ease-of-use as the goal. We've come a long way since then.

Try it here - input given as initial stack
Next sequence

Fixed previous version. Byte count changed so I decided to delete and repost.
For some reason, doesn't work on TIO.

The code has 3 parts: 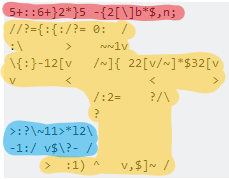 shout out to all the New Yorkers here! xD

N.B. The next one can be hardcoded because it is a finite sequence

Note that this takes 30 seconds for n = 2 on TIO. Paper that was both useful and useless at the same time.

Since it has been pointed out that MATLAB might be is overkill for such a simple sequence I decided to give Befunge a try, and free MATLAB for future use.

Hoping it's not against the rules I'm changing the language of my answer maintaining the same bytecount.

Yes, it was Burnside's lemma time again! Symmetric group acts on n nodes, inducing an action on the possible edges and on the possible graphs. Count the orbits of the last action, yada yada. Run through the elements by conjugacy classes represented by partitions of n. Number of graphs fixed by an element g is 2 to the number of orbits of edges under the action of the cyclic group generated by g. So use Burnside's lemma again and find the number of edges fixed by each g^k. An edge is fixed if its endpoints are on fixed points or on points that are interchanged by the group element. Feel free to ask for more details!

My first C++ program that actually does something interesting \o/

There are a bunch of spaces at the end

Using the recurrence for one value needs all the binomials from one row in Pascal's tringle, and then the next value needs the next row, so we compute one row from the previous one by addition, avoiding factorials and divisions, so Ly will stay in the realm of integers and not switch to floats.

Ly uses an infinite strip of stacks, of which we're using seven. For reference, let's call them, from left to right: count, vals, oldvals, oldvalsR, bins, oldbins, and oldbinsT. The stack that we are at in the beginning will be used as oldbins, just because this is the rightmost that needs initialisation. We can move between the stacks with < and >.

We initialise oldbins with 1, the first row of Pascal's triangle. Then we initialise vals with the first three values, which are all 1. Next, we read the input into count and subtract 2, then 0G* will turn that into 0 if it was negative.

Now count tells us how many more values we need. Next we'll have a loop with this loop invariant: vals contains some initial values of the series, we are at count which holds one nonnegative number that tells how many more values are needed, oldbins contains the row of Pascal's triangle that was used for the last value, and the other stacks are empty.

(We didn't really use the first row of the triangle, but we would have needed it if we had computed a(2) from the recurrence. We don't start with only two values, because there is no 0th row from which we can compute the first without complicating the algorithm. We could also store the row we need next, but then we would needlessly compute one row more than needed.)

To prepare for the work in the loop, we copy the vals stack to the backup cell using &s, then add a zero to this stack as initial value for the sum. Then we store the value of the backup cell to oldvals (with l) and also to oldvalsR, where we reverse it with r. Then we push the first value 1 of the new row of Pascal's triangle to bins, copy oldbins to oldbinsT and drop its first element there (with p).

We can think of the computation of bins as equivalent to this Haskell computation:

The inner loop then copies (s) the top element from oldbinsT to the backup cell and drops it from the stack (p), and puts it on top of the oldbins stack, where it is added to the former top element. This sum is then moved (again with sp<l) to the bins stack. The loop body is completed by going back to the oldbinsT stack. (Note that at the first iteration of the outer loop, this loop will terminate immediately.)

After this loop, the remaining value from oldbins is dropped, and the final 1 value appended to bins. Then bins is copied to oldbins.

The second inner loop is like this Haskell code:

Note that bins has one value less than the two other stacks, so we use this to control the loop. In it, we move the top value to oldvalsR and multiply, then move the result to oldvals and multiply again. This product is moved to vals and added to the accumulated sum on its top. (Remember that we already pushed a zero here.)

When the loop is done, we drop the remaining values from oldvalsR and oldvals and decrement count (with ,).

When the outer loop is done, we needlessly drop the zero from count and output (and drop) the top element from vals. Finally, we delete this whole stack with &p and explicitely end the program with ;. We don't need both, but if we didn't do either, implicit output would print all values from vals.

This isn't too slow though it probably could be improved. This sequence was fairly simple but 1272 bytes because Java.

This uses the formula from the OEIS page, which is a little complicated, but not too hard once you break it down.

This uses the generating function formula, by directly computing values of the sequence A000081.

I first wrote this in Python, and then I had decided to find a language with bignums, because this sequence grows pretty quickly. I hope this will explain it pretty well:

Memoization in Erlang from this SO answer

Next sequence. (quite tendious, yet doable I think)

Not the answer you're looking for? Browse other questions tagged math code-challenge sequence answer-chaining or ask your own question.