Let's see how good your language of choice is at selective randomness.

Given 4 characters, A, B, C, and D, or a string of 4 characters ABCD as input, output one of the characters with the following probabilities:

This is in-line with the following Plinko machine layout:

Your answer must make a genuine attempt at respecting the probabilities described. A proper explanation of how probabilities are computed in your answer (and why they respect the specs, disregarding pseudo-randomness and big numbers problems) is sufficient.

This is code-golf so fewest bytes in each language wins!

-13 bytes thanks to Alex Varga

Hope you guys don't mind me answering my own question after only 2 hours, but I highly doubt anybody else was planning on posting an answer in LMBM.

This literally just reflects the Plinko layout shown in the OP, flipped horizontally to cut down on unnecessary whitespace.

A monadic link taking a list of four characters and returning one with the probability distribution described.

View in the online interpreter!

This maps out to the following cube net:

Cubix is a language in which an instruction pointer travels around the faces of a cube, executing the commands it encounters. The only form of randomness is the command D, which sends the IP in a random direction: an equal chance of 1/4 each way.

However, we can use this to generate the correct weighted probabilites: by using D twice. The first D has a 1/4 of heading to a second D. This second D, however, has two directions blocked off with arrows (> D <) which send the instruction pointer back to the D to choose another direction. This means there are only two possible directions from there, each with a 1/8 overall chance of happening. This can be used to generate the correct character, as shown in the diagram below: 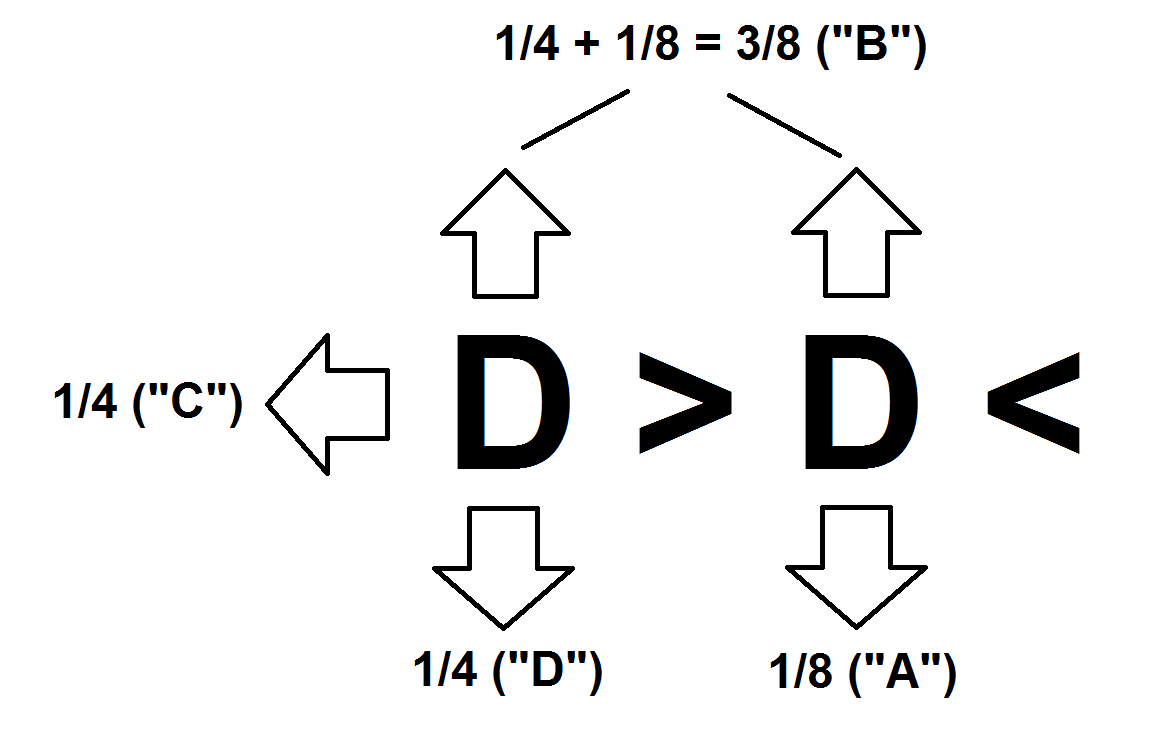 (Note that, in the actual code, the arrow on the right is replaced with a mirror, |)

The instruction pointer starts on the right, at the character i, facing right. It executes this i, taking the first character as input, and then moves onto the D, beginning the random process shown above.

An unnamed function taking and returning strings (or lists of characters).

Reads the characters from stdin separated by spaces. sample draws random samples from its first input in quantity of the second input (so 1), (optional replacement argument), with weights given by the last argument.

For the latter code, I sample n times (set n in the header) with replacement set to True (it's false by default), tabulate the results, and divide by n to see the relative probabilities of the inputs.

Run as pipe with -nR.

This is a Function<char[], Character>.

Try it online! (this test program runs the above function 1,000,000 times and outputs the experimental probabilities of choosing A, B, C, and D).

Input as a string.

Try it online! Link is to verbose version of code, although you hardly need it; ‽ picks a random element, ⟦⟧ creates a list, and the variables are those that get the appropriate input letters (in reverse order because I felt like it).

Uses the exact same algorithm as in my Python answer.

Applying this algorithm for ABCD:

-2 thanks to Leaky Nun (second solution)

-1 thanks to mnemonic (first solution)

Remove the X to see "ABBBCCDD". The X chooses a random element.

My first answer written directly on TIO using my mobile phone. Level up!

Explanation: if the original string is "ABCD", the function creates the string "ABCDBBCD" and takes a random element from it.

Try it online!, or watch it at the fish playground!

A brief overview of ><>: it's a 2D language with a fish that swims through the code, executing instructions as it goes. If it reaches the edge of the code, it wraps to the other side. The fish starts in the top left corner, moving right. Randomness is tricky in ><>: the only random instruction is x, which sets the fish's direction randomly out of up, down, left and right (with equal probability).

At the start of the program, the fish reads in two characters of input with i_i (each i reads a character from STDIN to the stack, and _ is a horizontal mirror, which the fish ignores now). It then reaches an x.

If the x sends the fish rightwards, it reads in one more character (the third), prints it with o and halts with ;. The left direction is similar: the fish reads two more characters (so we're up to the fourth), wraps around to the right, prints the fourth character and halts. If the fish swims up, it wraps and prints the second character, before being reflected right by / and halting. If it swims down, it gets reflected left by the / and hits another x.

This time, two directions just send the fish back to the x (right with an arrow, <, and up with a mirror, _). The fish therefore has 1/2 chance of escaping this x in each of the other two directions. Leftwards prints the top character on the stack, which is the second one, but downwards first swaps the two elements on the stack with $, so this direction prints the first character.

Try it online! Or run it 1000 times (slightly modified code) and check the number of times each char appears.

Works for both lists and strings.

Saved 2 bytes thanks to @Value Inc

try it n times! (I converted it to a function to repeat it more easily, but the algorithm is the same)

@z indexes into the input string at that position. The indexing is performed modulo the length of the string, so 4 indexes at position 0, 5 at position 1, and so on.

Seeing asgallant's earlier Javascript answer got me to thinking about JS. As he said:

From Math.random()*8&7 it breaks down as follows:

But then thanks to Arnauld, who posted after me, when he said:

If a time-dependent formula is allowed, we can just do:

which, if it is indeed allowed, led me to:

in which new Date%8 uses the same break-down table as above.

⎕a is the uppercase alphabet

if a and b are chosen randomly and independently, we can substitute 0123=ABCD to get the desired probability distribution

The three ?'s each produce a random bit. On the first cycle, these bits are run through the switches above (/'s and \'s) to determine which value we are going to output from this table:

(where _ can be either 0 or 1). We then walk along the input as necessary, printing and terminating when the correct value is reached.

The big alphabetic blob at the end is copied wholesale from the cat program, this solution simply suppresses output and terminates to get the intended effect.

A little "retrocomputing" example. Bear with me, I'm brand new at this. I gather that what is designated as the "input" need not be byte-counted itself. As stated in the OP, the input would be given as "ABCD". (I didn't initially realize that I needed to specify input being obtained, which added 4 bytes, while I golfed the rest down a byte.)

The terms INPUT, RND, PRINT and MID$ are each encoded internally as single-byte tokens.