The Crow vs The Taxicab

Imagine travelling to a point lying A miles away horizontally and B miles away vertically from your current position. Or in other words, travelling from (0, 0) to point (a, b). How far would you need to end up travelling? This seems like a straightforward question, but the answer depends on who you ask. If you're a crow, and you can travel as the crow flies, the distance travelled is just the Euclidean distance to (a, b). This is

But if you're just a boring human, you don't really want to walk that far, so you'll need to take a taxi. Most taxis wont drive in a straight line towards your destination because they generally try to stay on the roads. So the real distance you'll end up travelling is the sum of the vertical distance and the horizontal distance. Or the formula is:

This is called the Taxicab Distance. This picture nicely demonstrates the difference between the two: 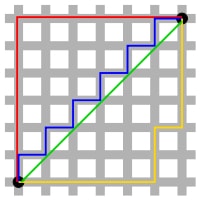 This leads to the real question I'm asking. If a crow and a taxicab both leave from point (0, 0), and travel to point (a, b), how much longer is the taxicab's path? Or, in more math jargon,

You must write the shortest possible program or function to answer this question. You may choose to take 'a' and 'b' as two separate inputs, or as a two item tuple. You can take input and output in any reasonable format. If the difference is a non integer, you must be accurate to at least two decimal places.

You can always assume that 'a' and 'b' will be integers, and that they won't both be 0. (Though it is possible that either one of them will be zero)

As usual, standard loopholes apply and try to make your program as short as possible, counted in bytes.

I will upvote any answer that posts an explanation of how the code works, and demonstrates any cool tricks used to save bytes.

Here are some examples for you to test your code on:

Engineer Toast, a much more experienced Taxi golfer, decided to take some time (probably a lot less than I did) and golf down my Taxi program by basically rewriting it. You can find my old answer body and links to my old TIOs in the edit history.

This is about as basic as it gets: subtract the two calculated values to find the difference. This uses ternary logic instead of Math.abs() to save one byte each occurrence. Unfortunately, the parentheses are required due to operator precedence.

The output is whatever Java's double can hold, which is accurate to more than two decimal places and satisfies the accuracy requirement of the question.

Takes v as a 1-column matrix. norm computes a particular norm of a matrix, with the default being the L1 norm (taxicab), and f the L2 norm ('f' for Frobenius/Euclidean).

or @Not a tree's suggestion

Fun fact, 11 bytes of this code were just copied from the question and golfed.

Special trick for golfing was the use of the pairwise reduction (2+/) to supply +/ with a no-op left argument, thereby avoiding parentheses: ||-(+/∘|9 11○⊢)

This is a function that takes the coordinates as an array, e.g.:

-1 thanks to my colleague Marshall.

Takes A as left argument and B as right argument.

Program that input as a list of two integers in Ans, e.g. call with {3,4}:prgmCROW (replacing 3,4 with the input and CROW with the name of the program).

∇f P declares a function f that takes a vector P containing the distances as an argument (e.g. [3, 4])

APL operates on vectors, so +/|P applies the | operator (abs function) to each element in the vector and then evaluates + on each element (so add all the elements). This gives the taxi distance.

P*2 yields a vector that is the same as P but with each element squared. +/P*2 to add those together and then (with parentheses for precedence because APL is right-to-left) *.5 to get the square root. This gives the crow distance.

Add an extra pair of parentheses for the taxi distance for precedence and compute the difference.

∇ to end the function.

This took me ages to solve. It doesn't round the final answer as that isn't possible in Add++. This is how the program works with the inputs -3 and -4 (ACC is the accumulator value)

THis is the initial solution, my first not-so-trivial Pyth solution and you can see just how bad I used to be at golfing in Pyth :)

In pseudocode, this is abs(a) + abs(b) - sqrt(fold+(g*g)). a and b are the first two cmdline args, and g is the list of cmdline args (i.e. argv). The * operator vectorizes, like many Pip operators, so $+g*g is the same thing as a*a + b*b. The rest is pretty straightforward.

Unfortunately, I can't save any bytes with $+ABg, because the precedence of operators with fold doesn't work like it should yet. $+ ought to be slightly higher precedence than binary -, but at the moment it parses as $+(ABg-RT$+g*g), giving the wrong answer. Doing ($+ABg)-RT$+g*g doesn't save any bytes over the less-obfuscated version above.

with an function instead of a full program

Essentially a port of my Python answer.

The coordinates are two numbers on the stack.

Creates a complex number to calculate the distance with.

The first trick is using .map instead of .each which saves a byte, then using the &:symbol notation to pass map a proc we execute to_i on each item in the array, and use multiple assignment to assign values to x and y.

A longer version would be:

(since map returns an array, multiple assignment is probably the way to do it, this does throw away any additional parameters, but we're assuming only two inputs anyway)

Then I just removed all of the spaces in the equation.

The goal here was to not repeat myself, e.g. having to write x or abs twice and my squaring twice x**2 + y**2

It did not work.

But what's interesting is that puts doesn't need a space, I guess the lexer is smart enough to see the special char and know it's a special var.

inject and reduce are synonyms, inject has a signature of

In our case we need to set the initial to 0, then we have our accumulator (i.e.: memo = 0) and the object from each iteration.

The down side to this method is that it will take more than two inputs and will either sum or square, add, then sqrt all the values in the array.

Sum defaults to 0 and as far as I can tell, works the same as inject/reduce.

Worksheet function that takes input from range [A1:B1] and outputs the difference between the Euclidean and Taxicab distances

Same as above but formatted for MS Excel

22
Tips for golfing in Japt