This is not a particularly hard code puzzle - but I'm interested to see your multiple ways of solving it.

The Degree of Unsaturation is the number of double chemical bonds between atoms, and/or the number rings in a chemical compound.

You will be given the molecular formula of a chemical compound in the form XaYbZc (where a, b and c are the number of atoms of X, Y or Z in the compound) - the formula could be of any length and contain any chemical element in the periodic table (though elements other than C, H, N, F, Cl, Br, I may be ignored as they do not feature in the formula). The compound will contain at least one atom of carbon. You must calculate and display its Degree of Unsaturation.

For example, the compound benzene (pictured below) has a DoU of 4 as it has three double bonds (shown by a double line between atoms), and a single ring (a number of atoms connected in a loop): 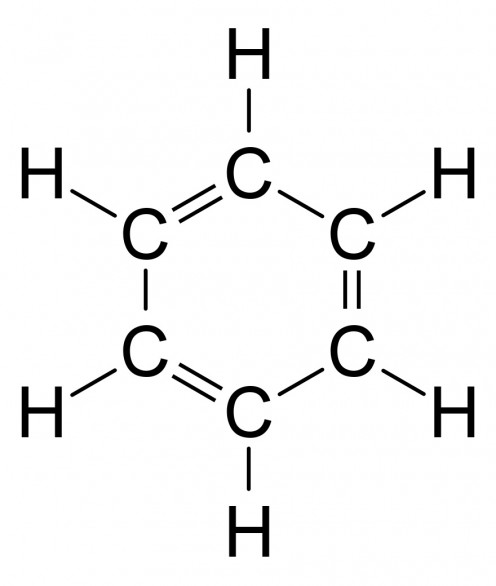 As defined by LibreTexts:

For an explanation of CH see here

In essence, you must identify if there are any of the above elements (C, H, N, F, Cl, Br, I) in the compound, and if so how many there are. Then, calculate the Degree of Unsaturation using the above formula.

Only C, H, N, F, Cl, Br, and I are valid inputs for the DoU formula. For the purposes of this puzzle, any other elements may be completely ignored (eg if the compound were C6H6Mn the result would still be 4). If there are none of the above compounds the answer would be zero.

You may assume that all the compounds input are chemically possible, contain at least one atom of carbon, and are known to exist. If the input is invalid, the program may output either 0 or -1, or produce no result.

Standard IO rules and loopholes apply. Input must be a standard string, and you can assume the input won't be empty. This is codegolf - so the shortest code in bytes wins.

If the input was guaranteed to be valid -- as the challenge introduction is misleadingly suggesting -- we could just do:

Thanks to @HyperNeutrino bringing the bytes down.

Takes the chemical formula as a command-line argument. Outputs 0 for invalid inputs. Try it online!

Uses a series of regex replacements to turn the chemical formula into a mathematical formula, evals it, and makes a couple tweaks to get the final value.

We eval the resulting string with V. This gives us 2C + N − X − H. To get the correct value, we make the following adjustments:

Not the answer you're looking for? Browse other questions tagged code-golf math chemistry or ask your own question.

2
VSEPR Strikes Back! [Revamped Again]
8
Print The Formula
27
Number of Straight-Chain Alk*nes of given length
6
Straight Chain Alk*nes without Order
12
The mad chemist and the clever programmer
9
Build a Mass Spectrometer!
12
Find the Mr of a Given Compound!
28
How many atoms in the hydrocarbon?
14
How Many Atoms?
7
Matching homologous groups