In brief: these identities allow us to reduce the problem of checking that a given number is Fibonacci to checking that a pair of much smaller numbers are Fibonacci. A little algebra will show that for large enough n (n = 3 should do), F2n+3 > Fn + 5Fn2 + 4 so there should always be enough space. 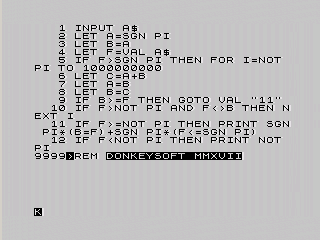 144
Fibonacci function or sequence
48
Is this number a factorial?
43
Division and remainder
50
It's Hip to be Square
60
Find the Smoothest Number
44
An abundance of integers!
43
Fibonacci reversed!
29
Find the closest Fibonacci Number
21
Fibonacci Encoding
19
Is this a losing square?
See more linked questions

22
Sum the First n Even Fibonacci Numbers
11
Am I a Special N-bonacci Number?
25
Am I a Cullen Number?
20
Am I an Automorphic Number?
11
Is it a Harshad Number?
29
Is it a Sphenic Number?
7
Reverse Fibonacci
6
Lucas and Fibonacci are in pair
23
Is this number secretly Fibonacci?