Your task today is to implement a time limit for getting input, a task I've found rather annoying to achieve in most languages.

Input must be from stdin (the console) or equivalent, not function or program arguments, however output can be either to stdout, your function's return value, or any other accepted output method.

You may ask for any amount of input, it can be a single character, a line, a word, or whatever method is shortest in your language as long as it waits for at least one character.

You must output as soon as the input is received, not after the 10 seconds have passed.

After 10 seconds have passed, you must end, you cannot continue waiting for input after no input received has been printed.

You may assume that input is not passed in the time between 10 seconds elapsing and text being printed to the screen, as this is an extremely small window. You may also assume that your language's builtin equivalent of sleep is consistently, absolutely perfect.

This is code-golf, fewest bytes wins!

This uses the -t (timeout) option to bash's read, which causes it to fail and return a nonzero exit code if no input is given in the specified number of seconds.

If timeout times out it returns Nothing and Just Char (Char, because we're using getChar) otherwise. This return value is converted to "no " or "" by function maybe "no " mempty. Append "input received" and print.

Since poll will return 1 in case of success, we multiply the result by 3 and shift the string accordingly. Then, we use the fact that struct pollfd has the following layout:

This is an anonymous tacit function which needs a dummy argument to run.

'no input received' the full string

:: upon those exceptions (all),

3⊣ discard that and instead return 3

} end of function (note that the argument ⍵ was never mentioned)

Saved 17 bytes thanks to @VisualMelon.

Waits until a number is pressed.

-2 bytes thanks to @apsillers
-2 bytes by moving console.log() into exit()

AHK has a built-in timeout for input boxes.
I tried to get clever and use !o instead of ErrorLevel but that fails if the user inputs a falsey value.
Almost half of the answer is just the command names and fixed text.

Requires a closing > on the input in order to work in a Snippet.

-6, get select() from pty instead of select. 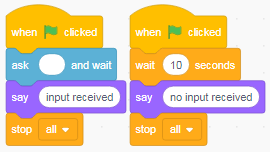 Beats @Syntax Error's answer by 1 point, but loses to it by 8 bytes.

"Accepts input" by waiting for any button press (that should count as input.)

+5 for the -t.08 flag, which sets the tick to 0.08 seconds, and +1 for the a flag, which counts whitespace and skipped instructions as ticks.

The program checks for input about once every second, and exits the loop if input is detected. If input is not received, it exits the loop from the bottom, appending no to the beginning of the string. The initial / is to ensure that the last check for input is exactly on the 10 second mark.

It then takes about 5-6 seconds to print the string itself.

Please don't suggest Version-specific Java improvements, this is a generic Java answer that works in all currently stable Java Environments (1.4 and above).

Very freaking wordy... The catch is required, can't throw it. System import shaves off like 5 bytes... Overloading is also wordy, so it ends up a wordy poorly-golfed-looking mess.

Longer than I expected. See comments for "no input recieved" TIO link.

And a 39 byte solution which probably isn't valid (doesn't actually accept text input, just has an OK button that you can press)