Rooting for Trees With the Right Nodes

A rooted tree is an acyclic graph such that there is exactly one path from one node, called the root, to each other node. A node v is called the parent of another node u if and only if the path from the root to u goes through v and there is an edge connecting u and v. If node v is the parent of node u, node u is a child of node v.

Two trees are isomorphic if one can be transformed into another by renaming the nodes, or in other words look the same when the nodes are unlabelled.

Here is a visualization:

You can see that the second set of two trees are identical in structure to the first set of two and are thus not counted. Both sets are composed of two trees which have one of the following two structures (the root is the node at the top): 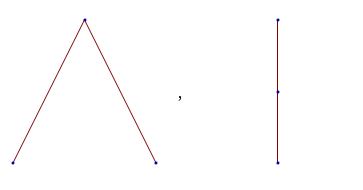 Here is another visualization:

Clearly, all of the trees are isomorphic, so only one is counted. Here is what the trees look like unlabeled: 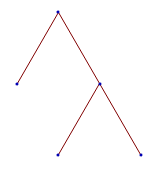 Input n=4, set=[0,2]. There are no possible trees because each time children are generated from a node, there are either 0 or 2 more nodes. Clearly, 4 nodes cannot be produced by adding 2 or 0 successively to 1 node, the root. Output: 0 or falsey.

Input and output should be taken in a reasonable format.

The output is a non-negative integer corresponding to how many trees can be formed.

(m?n)c is the number of n-node trees with c children at the root, each of which has a subtree of at most m nodes. It’s computed by summation over j, the number of these subtrees that have exactly m nodes.

A port of my Haskell answer, but it’s much faster in Pyth thanks to Pyth’s free automatic memoization. I had to work around a bug in Pyth’s binomial coefficient builtin, though.

The function g enumerates trees, and the main function counts them.

Each tree is recursively generated by splitting the requiring number of nodes n between c nodes in the first branch t, and n-c nodes in the remaining tree u. For a canonical form up to isomorphism, we require the branches to be sorted in decreasing order, so t must be at most the first element of u is u is non-empty. This is enforced as [t]+u>u.

Not the answer you're looking for? Browse other questions tagged code-golf combinatorics graph-theory tree-traversal or ask your own question.

20
Are these trees isomorphic?

10
Enumerate all binary trees with n nodes
8
Tree traversing
20
Are these trees isomorphic?
20
Enumerate binary trees
7
Regrowing trees
17
Write The Shortest Program To Check If A Binary Tree Is Balanced
5
Shortest Program To Find Lowest Common Ancestor of Two Nodes in a Binary Tree
20
Fibonacci trees
15
Bijection between \$ \mathbb N \$ and at-most-\$n\$-ary trees
8
Your trees need to be rerooted