Break two numbers up into their powers of 2, if they share any, return a falsey value. Otherwise, return a truthy value.

Input and output can be through any standard means

Output should be one truthy or falsey value

This is code-golf, so fewest bytes wins!

takes inputs in al and cl, and returns output in al, and is equivalent to:

Input is via command-line arguments. Output is via exit code, so 0 is truthy and 1 if falsy.

Takes input in the currying format.

It turns out my previous solution contained an implementation of what was essentially just bitwise AND (which is silly because it used & anyway).

Try it at MATL Online.

This returns -1 for truthy inputs, and 0otherwise. "Bitwise" is something QBasic isn't very good at, and I haven't built any of this stuff into QBIC either.

Here, (arg1,...)=>result is the D lambda syntax, and the ! and & are common notations for boolean negation and bitwise AND.

You can find the whole program coupled with the tests at tio.run.

print 1 for true and nothing for false

Takes input as two consecutive bytes. (In the TIO, the characters 'A' and '$' are used, corresponding to values 65 and 36.)

This solution has eight chunks, one per bit, plus an extra chunk at the end. Looking at these chunks:

A is bit 0x01 of the input. (The letters A though H correspond to a bit each.) Z holds on to a value for the next cycle while producing the previous value. Hence, A and Z are the current and previous values of bit 0x01.

[ is an AND-gate; it simply ANDs its two inputs together. So the full row of such gates is performing a bitwise AND of the two bytes.

Finally, ) is an OR-gate. All eight AND results are OR'd together, giving us a True is there is a match, and a False otherwise. We want the inverse of that, so use a NOT-gate (~) before passing it to the output.

We output via a, e, and f. The a, which corresponds to bit 0x01 of the output, receives the result of the above computation. The other two bits e and f are unconditionally on, together forming 0x30. Therefore, the output is either 0x30 or 0x31, which are the codes for ASCII characters '0' and '1'.

The extra stuff is housekeeping, it prevents output for the first cycle (there is no previous value at this point, so there is no reason to do a comparison).

One thing to note: we use an implicit OR here, instead of a proper gate as above. We could have used implicit OR'ing above as well, but there is no byte-savings there.

Due to a bug this does not currently work on tio, however it does work on the desktop version.

Here is a slightly longer version that works for both:

Most of our code goes into a logical not, in fact only the first byte is required if you want to get the opposite answer. 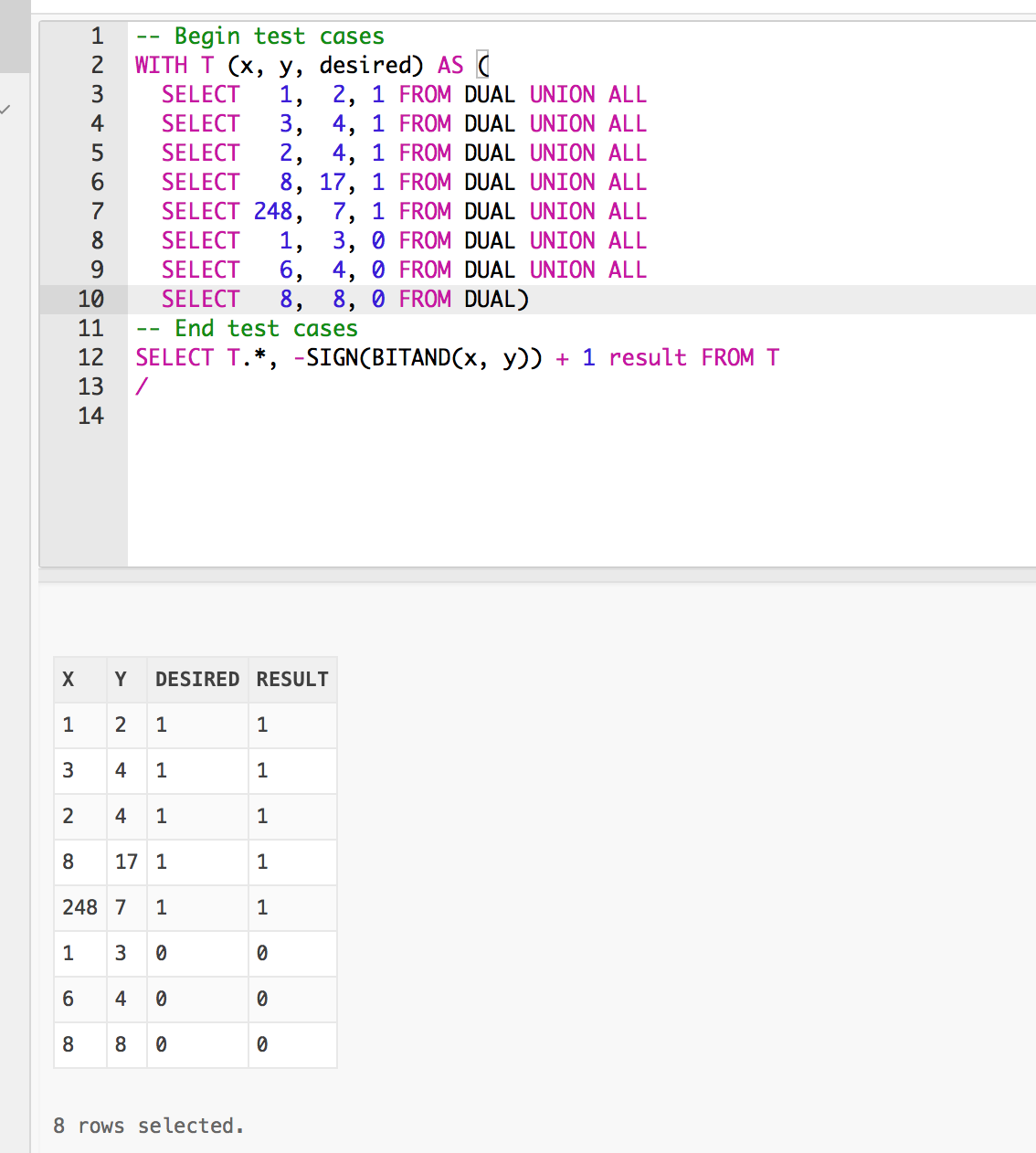 Not the answer you're looking for? Browse other questions tagged code-golf arithmetic decision-problem integer bitwise or ask your own question.

46
Is it a pangram?
52
Bernardino identifies unaltered dollar words
19
Determine if an Array contains something other than 2
48
Is this number a factorial?
12
Do two numbers contain unique factorials?
20
Socket - Plug compatibility
5
The anti-narcissist
20
Are All the Items the Same?