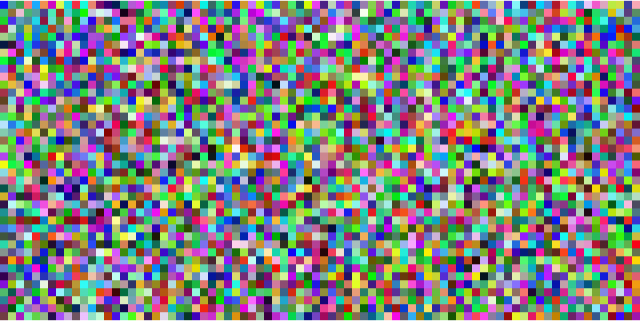 image makes the required 40x40 grid of rectangles with a matrix m of values (fixed to be 1:1600 in a 40x40 square), with a randomly selected color for each rectangle, k. It plots the image, waits long enough to actually render the image, then randomly changes one of the colors. Uses hsv encoding since it is a value between 0 and 1, which allows us to use runif to generate random colors.

This generates a new plot each time.

Very straightforward, uses Dynamic around an ArrayPlot. Not terribly fast; limited by the maximum speed dynamic can update, but should fulfill the goal on most computers.

Starts out with a random 40x40 grid and recolors a random pixel one at a time. Ceiling characters are 3 bytes each, Ouch!

Uses the -rruby2d flag. 80x60 "pixel" image. Timed the module to run 100 update ticks in 2 seconds, so it theoretically replaces all pixels on the screen in under 2 minutes.

If you count the bytes you'll see that it's more than 78 bytes. That's because I had to replace the ASCII escape character (decimal value 27) with "\e" as stackexchange sanitizes the post. Both can be used in ruby code so the above code will work but for the purpose of golfing you can replace them with the literal escape character.

The code prints a box into the terminal at a random position from 0;0 to 40;40 with a random color. 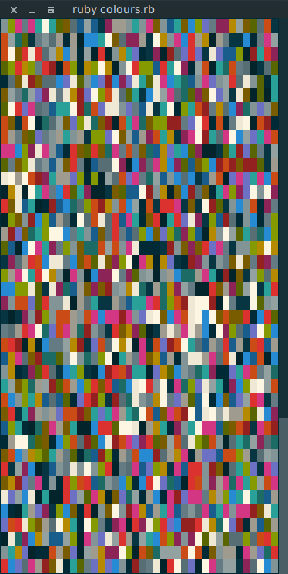 (result may vary depending on terminal and color scheme)

To get it down to 47 bytes, you'll have to strip spaces and trailing zeroes and end of file character manually.

To prove whole world is not always bigger (bin is .rar file)

My previous answer did not animate; this one does.

save to file, call in browser. It´s as fast as your browser can refresh.
Probably not able to set 4096 pixels in 180 seconds though. 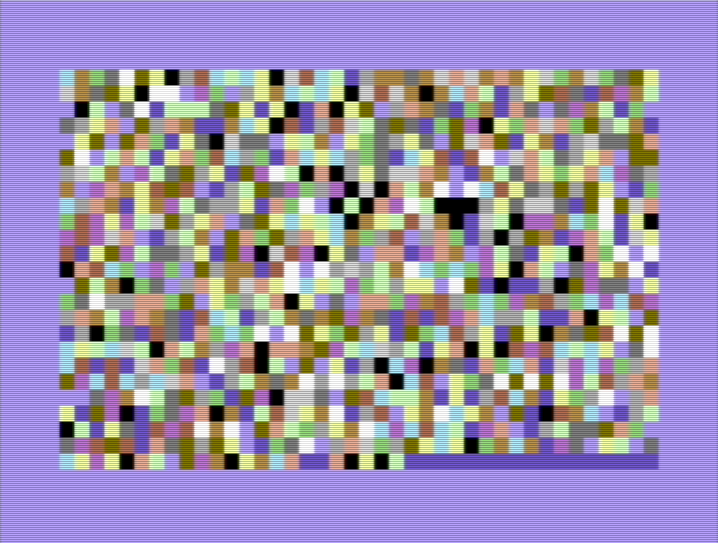 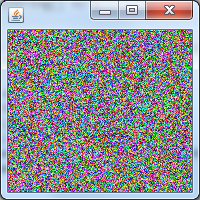 Uses OpenCV library to show the RGB array. Pair of bytes can be saved if define smaller array or a square array.
Note: imshow and waitkey methods are from cv2 module; zeros and random.randint are from numpy module.

Inspired (well, stolen from?) @marcosm answer, here is a quite golfed down version (from his 56 bytes down to 45, shaving the -n 1, and xarg-ing into a printf %s):

Must be run in the interactive shell

Unfortunately, converting expr int(rand()* into a proc makes the script have one byte more!

To stop, one just needs to click the ineffable "X" button.

Pretty simple, just places a randomly-colored 1-pixel square at a random location from 0 to 40.

Can anyone guess what book I've been reading, given my language choice?

1017
Build a working game of Tetris in Conway's Game of Life
59
Duck, duck, goose!
51
Create a Paint program!
42
It's a rainy day
48
“As we travel the universe…”
27
The shortest distance between two points is a line
20
Random Pixel Poking
13
Tips for golfing in Processing
1
Super Mario in Colors :)