The strange attraction of the logistic map

The purpose of the challenge is to approximately plot the attractor of the logistic map as a function of its parameter r (also called bifurcation diagram), or a subregion of it. The appearance of the graph can be seen in the following image from Wikipedia: 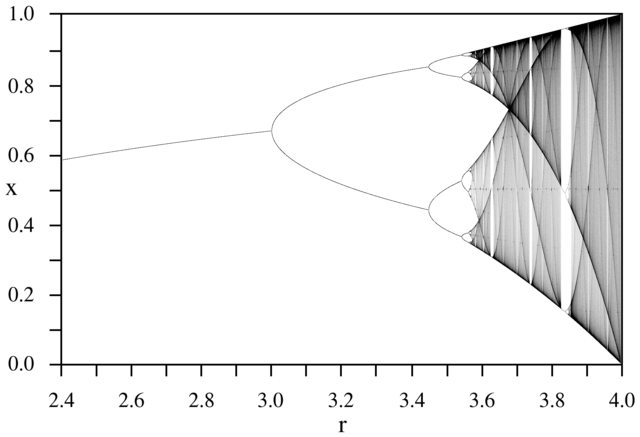 where r is the parameter of the map, assumed to lie in the interval [0, 4].

Given r in [0,4], and an initial value x0 in the interval [0,1], it is interesting to repeatedly apply the function for a large number N of iterations, producing a final value xN. Note that xN will necessarily lie in [0,1] too.

This does not mean that for r = 3.2 each sequence converges to one of those two values. In fact, for the two initial values considered above, the sequences are (note the oscillating behaviour):

What is true is that for sufficiently large N, and for almost all initial values x0, the term xN will be close to one of the elements of the set {0.5130, 0.7995}. This set is called the attractor for this specific r.

For other values of the parameter r the size of the atractor set, or its elements, will change. The graph plots the elements in the attractor for each r.

The attractor for a specific r can be estimated by

For each r in R and each x0 in X, iterate the logistic map N times to produce xN. Record the obtained tuples (r, xN).

Plot each tuple (r, xN) as a point in the plane with r as horizontal axis and xN as vertical axis. Output should be graphic (not ASCII art). 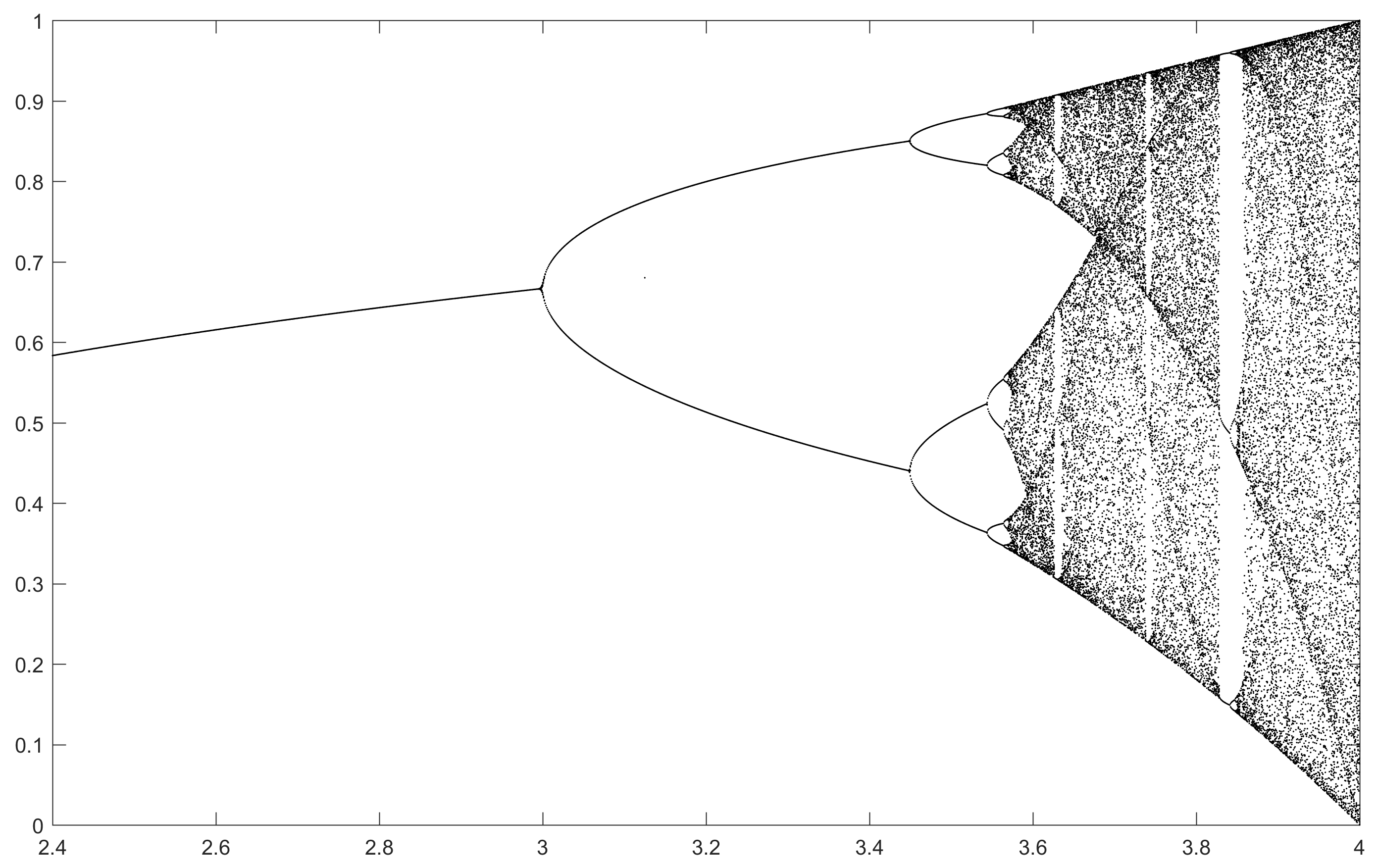 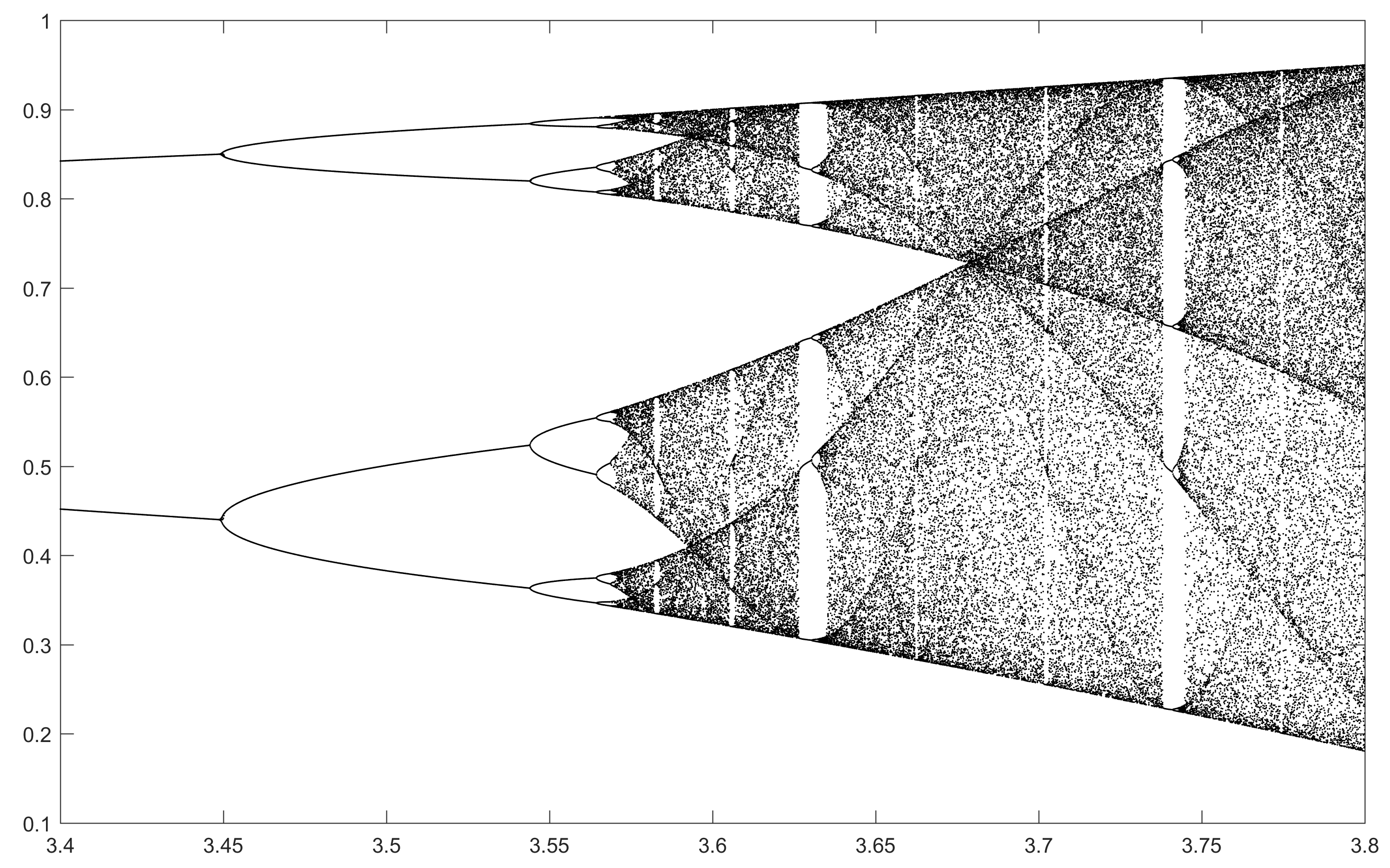 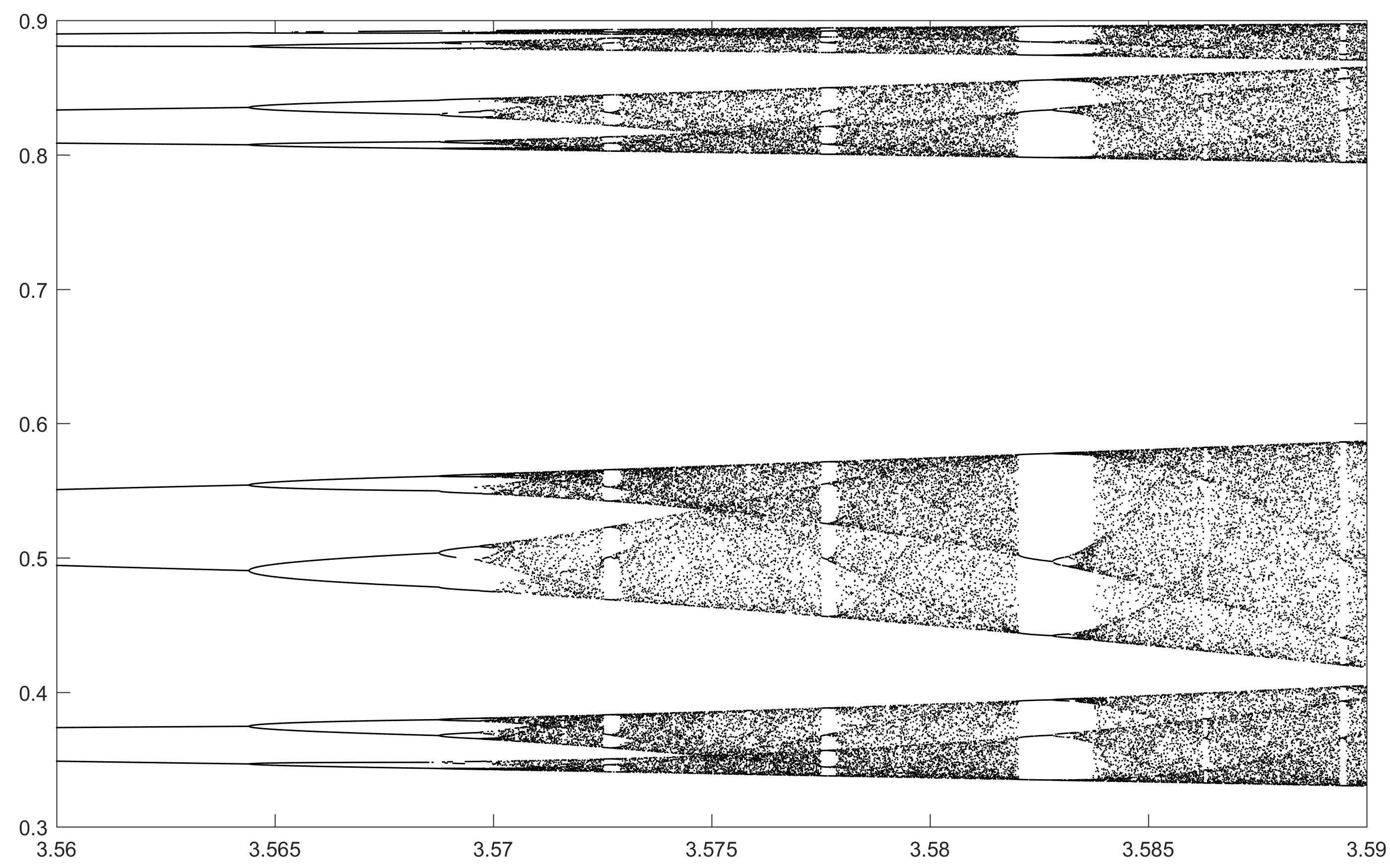 Thanks to @FryAmTheEggman and @AndrasDeak for their helpful comments while the challenge was in the sandbox.

4 bytes saved thanks to @Luis

Try it at MATL Online 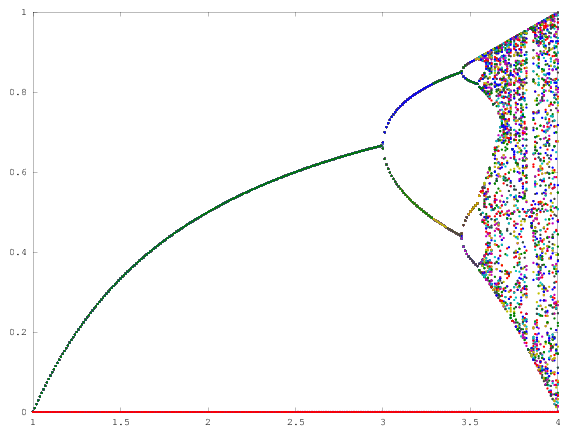 Sample output, on the second test case: the input

yields the graphics below. 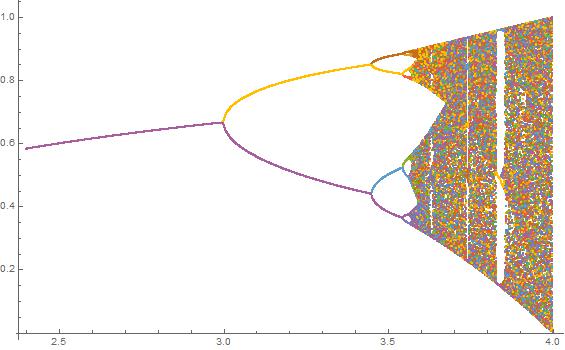 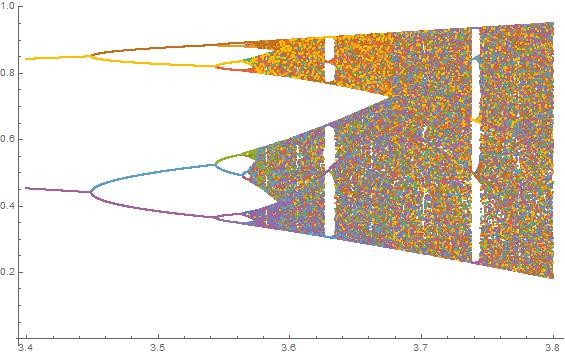 A complete TI-Basic program which takes input in the order r1,r2,s,N and then shows the output in real time on the graph screen. Note that this tends to be incredibly slow.

Thanks to Kritixi Lithos for saving 3 bytes.

It may not be the shortest, but it draws in real time, although it can be incredibly slow with huge inputs. Anyways, this is an anonymous function which takes input in the format (N,r1,r2,s) and outputs the plot in a new window. Note that this must be run with the GNOME version of Genius. 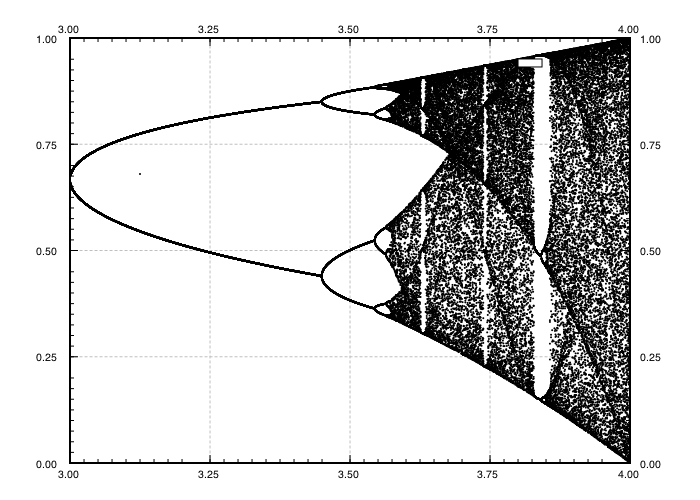 Which productes the function

plot(NA,...) creates an empty canvas that has the correct dimensions. q is the function that does the iterating. It takes a value of r, and then does n iterations for all starting points between 0.01 and 0.99. It then returns the resulting vector.

The for-loop applies the function q to the sequence a to b with step s. Instead of returning the values, it adds them as points to the plot. If the attraction point is one value, all the points would just overlap and show as one point. cex=.1 is a necessary addition to make the points as small as possible. 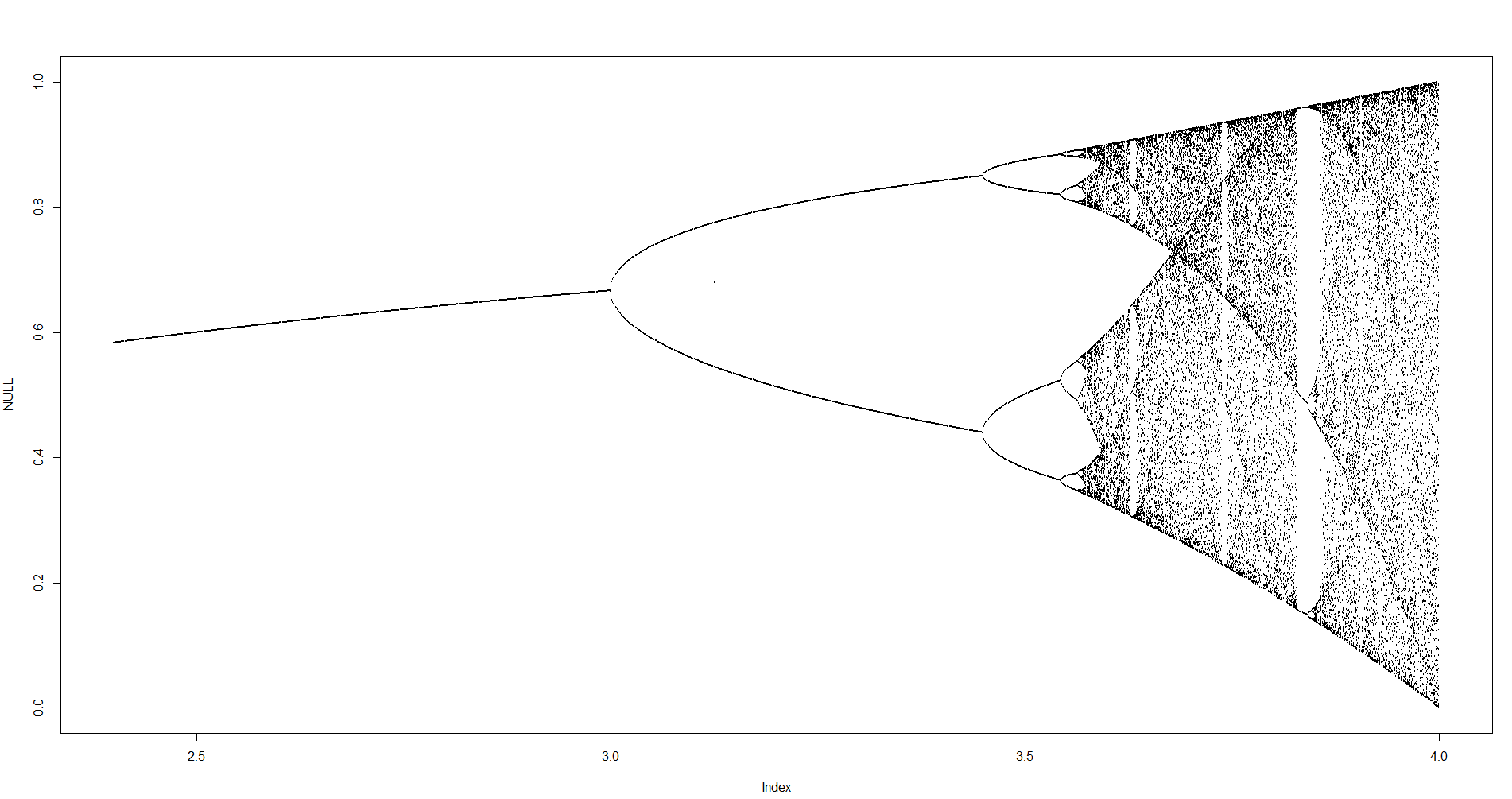 Not the answer you're looking for? Browse other questions tagged code-golf math number graphical-output fractal or ask your own question.