Eyeballing the binary values printed as ovals and sticks is not so easy... To help with that, you must write a function (or a program) that prints numbers in custom binary representation.
So I want to take a number, say 3 (00000011) and output the bits in user-defined format, for example with space separated pairs:

or, say, in reversed order and with some decorators, e.g.:

Furthermore, there must be possibilty to show '0' and '1' as custom characters to distinguish them better, e.g.:

So the challenge is to write the code which does that all whithin the following specification.

The function takes input like this: f(A, mask, zeros, ones)

Rules for the output construction:

Look at this image with example closely to understand how the output is generated: 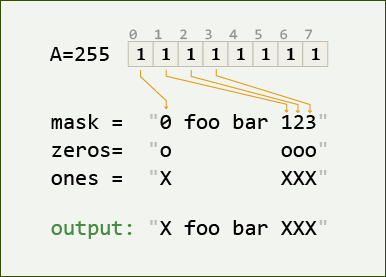 So only the single digits in the mask are parsed and replaced by corresponding bits of A, other characters are left as is. Further, if the value of the taken bit is 1 then it shows up in the final output as "X" and if it is 0 then it shows up as "o". In the above example all four taken bits are "1" so we see "X" in all slots.

If the input number was 128, then, logically, the output would be X foo bar ooo. Characters in parameters "zeros" and "ones": any printable ASCII chars, assume they are always char-aligned with the mask.

For the clarity, see more examples.

Output all 8 bits in common order with a space delimiter, in common oval-and-stick notation:

Diverse notations in one output, e.g. for packed data:

The rules have been slightly simplified - the program must print one number only (not array/list of numbers as it was proposed initially).

The mask parameter f has each digit (/\d/) substituted with a character from the appropriate array. The special variable $`, which holds the text leading up to the current match, is (ab)used here to keep track of position.

Pull out indices where input mask M is a numeral, call it m this is where we will be modifying the input mask. Take the numerals out of the string, cast to integers and then index into our 8-bit array to get the correct ordering. Use this 8-bit array to index into either O (if 1 is set) or Z (if 0 is set), and then index into these lists at the indices given by m. Finally apply (:) this new list to the original mask at indices m.

Could shave off a further 14 bytes if we were allowed to give the arguments in the form:

as q allows for up to 3 arguments to be given to a function without being explicitly named (they are x, y and z respectively):

Not the answer you're looking for? Browse other questions tagged code-golf string binary or ask your own question.

7
Extraction of Bits
19
Highlight the Bounding Box, Part I: Cartesian Grid
21
The Art of Word Shaping
45
Output the first position in your program for each input character
21
The weight of a Zero
37
Consecutive 1-Bits are Incremented
19
Fill the Golfeek gutter
43
Let's study Neil numbers
21
Who needs 8 bits for one character?
13
I want 8 bits for every character!