Suppose you have two six-sided dice. Roll the pair 100 times, calculating the sum of each pair. Print out the number of times each sum occurred. If a sum was never rolled, you must include a zero or some way to identify that that particular sum was never rolled.

"Ugly" outputs are fine (loads of trailing zeros, extra output, strange ways of representing data, etc.) as long as you explain how the data should be read.

A niladic link. Output format is a list of lists of [value, count].

The output has two leading zeros

Straightforward implementation. If any sum is never achieved, the 0 is omitted from the list.

Output is a list of 11 numbers (some of them possibly 0) separated by spaces, indicating the number of times for each pair from 2 to 12.

For comparison, the theoretical average number of times each pair will appear on average can be computed as 6:gtY+36/100*.

If the number of rolls is increased the obtained values approach the theorerical ones. See for example the obtained and theoretical values with 10000 rolls.

That means 1, 9, and 0 occurred four times each, four occurred fourteen times, etc. Since the "dice" in this code produce a number from 0-5, add two to each of these numbers to get the rolls a pair of standard 1-6 dice would produce.

Returns a table object of elements and counts of each. Excludes any values that didn't occur.

sample(6,200,T) samples 200 times from 1:6 uniformly with replacement, then it makes a matrix with 2 rows, sums the columns, then sorts them into ascending order and computes the lengths of the runs. Omits any dice sums that aren't attained.

Returns an rle object, which prints by default in the following format:

where lengths are the counts and the values are the dice sums.

prints an associative array. key is result of two dices and value is the count of these results

Seeing as "ugly" output is allowed, the following will output an array containing the number of times each score from 2-12 was rolled, with an additional 89 elements set to 0.

Rolls the dice, and stores them in the first 11 spots of the heap, then just iterates through the heap printing each counter. This is one of the first recorded uses of the rand keyword combined with an assignment operator.

It is worth noting, that a few modifications can be made to output a histogram of the rolls. 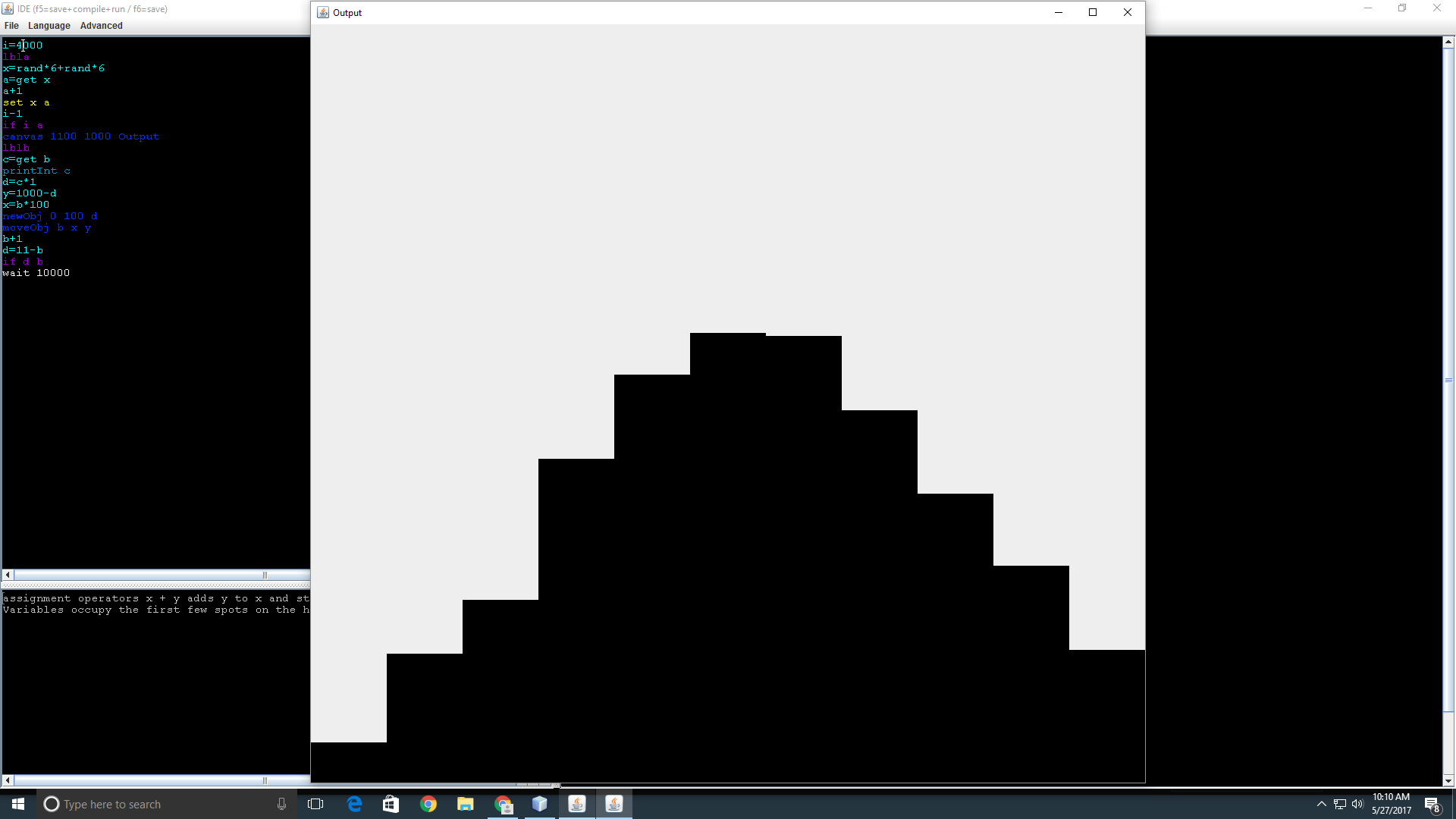 Unfortunately it must be run from the offline interpreter.

Tried something harder than Jelly.

A lambda returning an int[] of frequencies. Assign to Supplier<int[]>.

Roll a dice 100?6 , roll a dice again and add the vectors together. Then see where each results matches the range 0..10, then sum up all the trues in each list:

'Golfing' is mostly swapping out q keywords for the k equivalents, namely each and til.

5 bytes saved thanks to @Adám

The ugly output format is a sequence of numbers separated by newlines, where the nth number says how many times the sum was n — it's ugly because it prints forever, for all positive integers n, although most of the lines will be 0. (The TIO link is modified to stop after n=12, at the cost of 5 bytes.)

The fish playground is fairly slow — it takes about three and a half minutes to print up to n=12 at top speed — so you may want to modify it to roll 10 pairs of dice instead of 100 by changing the aa* in the 5th line to a   (that is, a followed by two spaces).

The random dice rolls are done by this bit:

The xs change the fish's direction randomly. Assuming that's implemented with equal probabilities, it's clear that the die roll result is a uniform distribution by symmetry.

Once the fish has rolled 100 pairs of dice, it counts how many times the sum was n with this bit (unwrapped for clarity, and starting in the top left):

We keep n at the front of the stack, and use the register to count the number of times n appears.

For sums with zero rolls, the rolls column is blank.

prints a leading 0_ and then the occurences of 2 to 12, followed by an underscore each.
Run with -nr or try it online.

k 'port' of my q solution. Evaluation occurs right-to-left, hence brackets around the til (!)

Outputs each step in the creation of the rolls, then outputs frequency of each sum 0 - 10 on a separate line.

Not the answer you're looking for?Browse other questions tagged code-golf probability-theory or ask your own question.