Everyone likes a good puzzle. After all, that's the basis for Code Golf and Code Challenge! What better puzzle exists than the famous Rubik's Cube? Well what else but her slightly larger sister, the Rubik's Revenge! 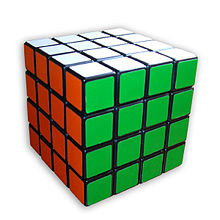 Released in 1982 following the success of the classic Rubik's Cube invented by Hungarian sculptor and professor of architecture Ernő Rubik, a Rubik's Revenge is a cubic combination puzzle.

Each face contains sixteen stickers (as opposed to the traditional nine), each of which is one of six colours. An internal pivot mechanism enables each face to turn independently, effectively mixing up the colours.

The puzzle is solved when each face contains only one colour.

The biggest difference between the Rubik's Revenge and the Rubik's Cube is that the Revenge contains no fixed facets; the two inner facets are freely movable, allowing for every face to move freely.

A move is defined as a change of state for the Rubik's Revenge. This challenge will stick with the basic 12 moves:

All moves are clockwise turns associated with the respective face of the cube. To denote a counter-clockwise turn, a prime symbol (') is used. Example moves and their equivalences follow.

More examples will be provided upon request.

The Rubik's Revenge uses six basic colours for each of the stickers on a face. In this challenge, the colours will be represented as numbers.

A 2-Dimensional representation of the solved cube is as follows:

Where the corresponding faces are arranged as follows:

In this challenge, the goal will be to write the shortest and most efficient Rubik's Revenge solver. Efficiency in this challenge is defined with respect to the total number of moves to solve a given input. Further, to promote the design of good heuristics, each input should run in less than 5 minutes and take less than 1,000 moves to solve.

The input will be a single value consisting of a sequence of the numbers 0-5. Each input will have exactly 96 digits. The faces of the Revenge will be represented as the following ranges of numbers within the input:

For a single face, the 16 corresponding digits will be represented as follows:

An example solved Revenge can be represented as follows:

Note that there are many different possible representations of a solved Revenge, depending on the colour of the front face and the overall orientation of the Revenge.

Assume that a valid solution is reachable from any input.

The output should be the sequence of moves taken to find a solution. The output may or may not have a delimiter between moves; it is up to the coder.

Scoring for each test case will be based on the criteria defined in the The Task section.

Note that since your score increases with the fewer amount of moves for a solution, it is recommended to find optimal moves for certain patterns.

To preserve readability, white-space and newlines will not count toward code length.

Tests will be provided (ideally) within a week of posting. Each code must run each of the provided inputs and report total score as well as scores for each test.

I project the challenge will remain open for at least three (3) weeks, possibly more. Suggestions on the length of the challenge are encouraged.

Remember to have fun, and happy coding!