Given a positive integer N, your task is to return the number of steps required by the following algorithm to reach N:

We stop as soon as N is reached. Only the first step is systematically executed. Steps #2 and #3 may not be processed at all.

I couldn't be bothered to implement the algorithm in the challenge, so I wanted to look for a shortcut to the solution. While I found one, unfortunately it doesn't beat the Mathematica answer that does implement the algorithm. That said, I'm sure this isn't optimally golfed yet, and there might be other languages who can benefit from this approach or some of the insights gained in the process.

So I claim that the sequence we're supposed to compute is:

In somewhat simpler words, here is how we find the answer for non-triangular numbers: first, find the largest triangular number Tj which is less than n. Then j is the penultimate integer that gets added during step 1 (because after adding j+1 we will have exceeded n). Then decompose n into as many (or as small) consecutive integers as possible and call the maximum among these numbers k. The result is simply 2*(k-j). The intuitive reason for this is that the maximum in the decomposition grows by 1 every other step and we stop when we reach k.

We need to show four things to prove that this works:

We've already shown why (1) is true. Next, we prove that we can't end on an insertion step except the initial one (which doesn't happen for non-triangular numbers).

Suppose we ended on an insertion step, reaching n after adding a value p to the sum. That means that before this insertion step, the value was n-p (or less if we added multiple values at once). But this insertion step was preceded by a deletion step (since we couldn't have hit n during step 1). The last value q we removed during this deletion step was necessarily less than p due to the way the algorithm works. But that means before we removed q we had n-p+q (or less) which is less than n. But that's a contradiction, because we would have had to stop removing integers when we hit n-p+q instead of removing another q. This proves point (2) above. So now we know that we always end on a deletion step and that therefore all non-triangular numbers have even outputs.

Next we prove (3), that each insertion step can only insert one value. This is essentially a corollary of (2). We have shown that after adding one value we cannot hit n exactly and since the prove was using an inequality, we also cannot end up below n (since then n-p+q would still be less than n and we shouldn't have removed that many values in the first place). So whenever we add a single value, we're guaranteed to exceed n because we went below n by removing a smaller value. Hence, we know that the upper end of the sum grows by 1 every other step. We know the initial value of this upper end (it's the smallest m such that Tm > n). Now we just need to figure out this upper end once we've reached the final sum. Then the number of steps is simply twice the difference (plus 1).

To do this, we prove (4), that the final sum is always the decomposition of n into as many integers as possible, or the decomposition where the maximum in that decomposition is minimal (i.e. it's the earliest possible decomposition). We'll again do this by contradiction (the wording in this part could be a bit more rigorous, but I've already spent way too much time on this...).

Say the earliest/longest possible decomposition of n is some a + (a+1) + ... (b-1) + b, a ≤ b, and say the algorithm skips it. That means at the time that b gets added, a must no longer be part of the sum. If a was part of the sum s, then we'd have n ≤ s at that moment. So either the sum only contains the values from a to b, which equals n and we stop (hence we didn't skip this decomposition), or there is at least one value less than a in the sum, win which case n < s and that value would get removed until we hit the exact sum (again, the decomposition wasn't skipped). So we'd have to get rid of a before adding b. But that means we'd have to reach a situation in which a is the smallest component of the sum, and the largest isn't b yet. However, at that point we can't remove a, because the sum is clearly less than n (since b is missing), so we're required to add values first until we add b and hit n exactly. This proves (4).

So taking these things together: we know that the first pair of steps gives us a maximum value of A002024(n). We know that the maximum value of the final decomposition is A212652(n). And we know that this maximum is incremented once in every pair of steps. Hence, the final expression is 2*(A212652(n) - A002024(n) + 1). This formula almost works for triangular numbers, except that for those we only need 1 step instead of 2, which is why we correct the result with the indicator function of the triangular numbers (or its inverse, whichever is more convenient).

Finally, as for the implementation. For the former sequence, I'm using the formula MIN(odd d|n; n/d + (d-1)/2) from OEIS. It turns out to save a few bytes if we take the factor of 2 into this expression to get MIN(odd d|n; 2n/d + d-1), because that -1 then cancels with the +1 in my first version of f(n) which directly encodes the two cases for triangular and non-triangular numbers. In the code, this is:

And finally, the inverse indicator function of the triangular numbers is 0 whenever 8n+1 is a perfect square. This can be expressed in Mathematica as

There are a lot of ways to express these last two sequences and to shift some constant offset between them, so I'm sure this is not an optimal implementation yet, but I hope this might give others a starting point to look into new approaches in their own languages.

Since I went to all this trouble, here is a plot of the sequence up to n = 1000 (I could also compute 100k in a couple of seconds, but it doesn't really show any additional insights): 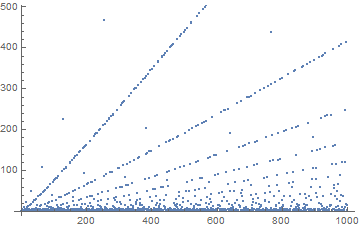 It might be interesting to look into the variations about those very straight lines, but I'll leave that to someone else...

A monadic link that returns the result (N=65536 takes less than two seconds).

For a thorough explanation of the algorithm see the fantastic post by Martin Ender.

The 29 byte full-program implementation I created of the algorithm described takes 4 min 30 for N=65536 on my laptop, so I suppose it does not count.

Condition; repeat while k is not equal to the input.

If the input is greater than k:

While the input is greater than k, increment u and increment k by u.

If the input is not greater than k:

While the input is less than k, decrement k by l and increment l.

Return c after the loop.

use the spaceship operator

1#1 is an anonymous function taking and returning an integer.

When it does exit, the trail left on the stack tells the main program how many iterations it took.

Explanation: l is zero if step 2 has never executed. This allows n to track number of iterations of step 3. Since the algorithm never stops at step 3, it must therefore have run step 1 once and step 2 n+1 times for a total of n+n+2 steps. However if the parameter is a triangular number then step 2 never executes so we need to subtract one step.

This recursive version at 84 bytes is not able to compute all values up to 65536:

The variables a and b stand for the (constantly changing) beginning and end numbers in the sum under consideration, while q stands for the running total (of the numbers from a+1 to b); t keeps track of all the values of q encountered so far. After initializing these variables, the For loop keeps executing If[q<#,q+=++b,q-=++a], which either adds a new number on to the end or subtracts the number at the front as dictated by the spec, until q equals the input.

Now we just have to extract the number of steps from t, the list of q values encountered along the way. For example, when the input is 11, the For loop exits with t equaling {0,1,3,6,10,15,14,12,9,15,11}. The best way I found to calculate the number of steps from this is to count how many times the differences switch from going up to going down; that's what the verbose command Length@Split@Sign@Differences@t does, but I suspect that can be improved.

Command-line arguments (including a space):

c counts the number of steps. m and M store the minimum and maximum of the range, s the sum. Initially, they're all zero.

Continuously, c is increased, and s is compared to n. As long as they're unequal:

When the loop exits, c has been increased one too many times. Decrementing it produces the correct result, and it happens to be calculated in the correct register to act as the return value.

Amusingly happens to use the exact same variable names as Khaled.K's C answer. They aren't copied.

Port of @JonathanAllan's Jelly answer, which is using @MartinEnder's Mathematica formula, so make sure to upvote both of them!

Try it online or verify the first 100 test cases. (NOTE: The .ï has been replaced with DïQ in the TIOs, because this .ï bug on floating values, which was fixed on October 23rd, hasn't been pushed to TIO yet.)

(inspired by an earlier Haskell implementation)

Try it
It runs with an input of 65536 in under 45 seconds on my computer, but I have been unable to get it to run in under 60 seconds with TIO.run.
I have Rakudo v2017.04+ , where it has v2017.01.
Rakudo/NQP/MoarVM gets optimizations almost daily, so there could be any number of them from the interim that are needed to get it in under time.

Note that Rakudo has an optimization for Range.sum so that it doesn't have to iterate through all of the values.

However, it can theoretically calculate for any given n.

Full program only, because ¿ handles dyads in an... interesting way.

Directly implements the given algorithm.

EDIT: My machine seems to have taken more than a minute for N = 32924, 32933, and 32941. TIO computes each result in less than 5 seconds, however, so I suspect this may be because the lid of my laptop was closed for eight hours.

N = 45596 also just now took a minute and 9 seconds, but this also coincided with my laptop going to sleep, and TIO takes less than 2 seconds for it.

Thanks @Jörg for reminding me of the spaceship.

Without the parentheses around the spaceship in the post condition, PHP wouldn not know what comparison to evaluate first (and throw a syntax error).

Not the answer you're looking for? Browse other questions tagged code-golf math restricted-time integer-partitions or ask your own question.