Make a Windows style Loading bar by the following instructions.

Every tick, you should wait 100 ms, then move each dots by one character right. if the dot is on the tenth character, move it to the first. Notice that you should clear the screen before outputting again. The output is ordered as the following:

..Then it loops forever.

TIO currently does not support graphical output, but the official interpreter does. I think this is the first time I have gotten a chance to test out the graphical output functionality of SILOS. 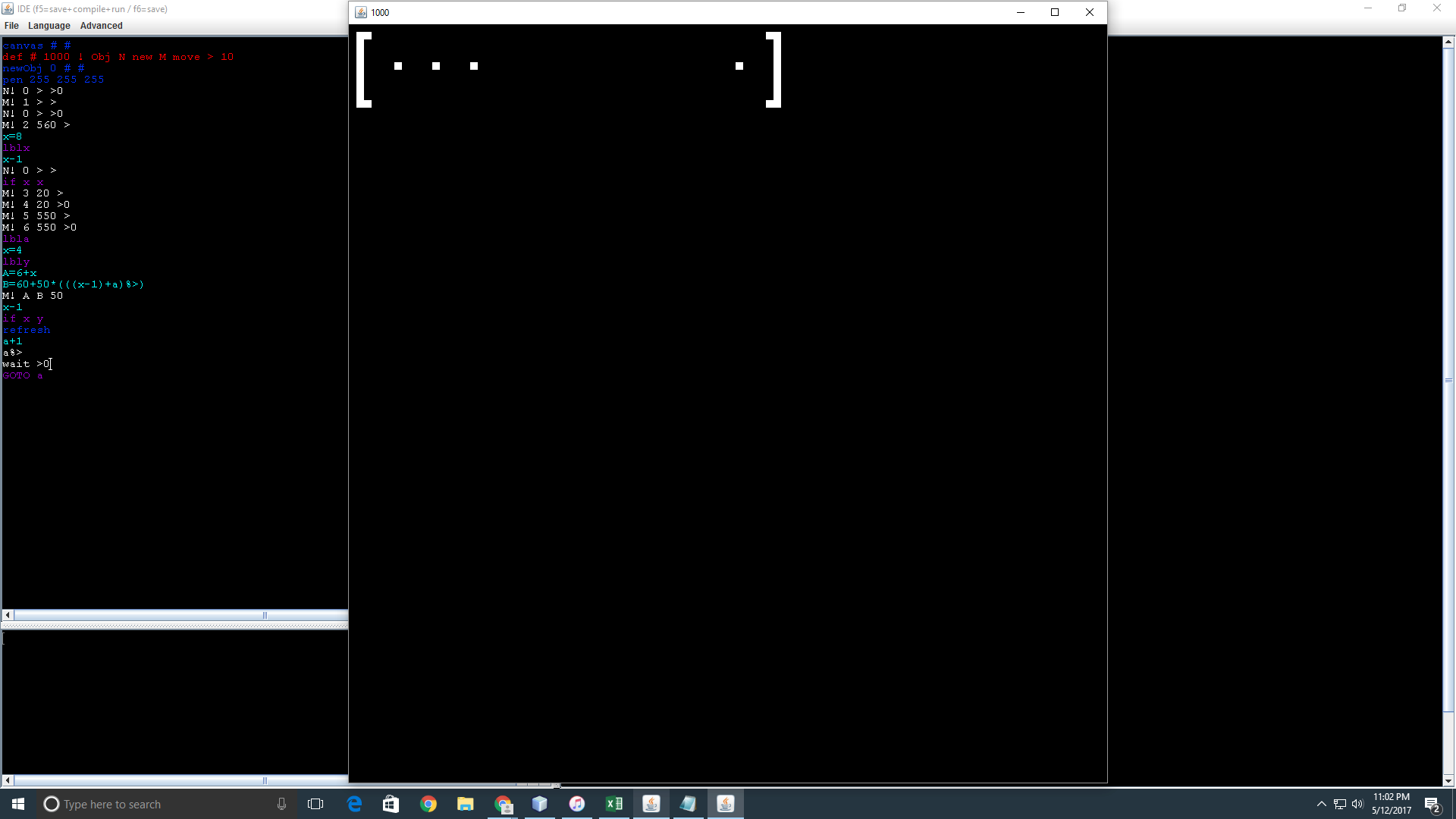 Try it online with a slightly modified version: ⎕← replaced by ∆_ which outputs with timestamps.

10↑ take the first ten characters of that (pads with spaces)

¯1⌽ rotate one character from the tail to the head

r← assign that to r

1⌽ rotate one character from the head to the tail

⎕TC[…] index the list of Terminal Control characters with

.1⊣ discard that in favour of the number 0.1

∇ recurse (tail calls do not work up a stack, and can thus be repeated forever)

Saved 9 bytes thanks to @obakaron

First, we define a function r to rotate a string to the right. We begin with ".... " and construct an infinite list of its right-rotations, then for each x of these, print:

Then threadDelay waits 100000 microseconds before continuing onto the next element.

Since we are applying these operations to an infinite list, it will continue forever.

Using Immediate Window and Cell A1 as output

(That ^M is a single carriage return character.)

I really tried to base the output on a lazy infinite list, but couldn't nearly approach the terseness of this solution.

Modified and improved version of https://codegolf.stackexchange.com/a/120321.

For once my Octave answer is not MATLAB compatible. Specifically this solution uses

Where $string|% s*g $From $Length is a shortcut to summon $string.SubString($From,$Length)

This solution has one small disadvantage:

This Windows style Loading bar is an Immortal Eldar from Valinor.

Not the answer you're looking for? Browse other questions tagged code-golf ascii-art kolmogorov-complexity animation or ask your own question.

109
Loading… Forever
47
Tips for golfing in PowerShell
34
Tell me my screen resolution!
8
What week is it?