Working on my Knight moves

Hexagonal chess describes a family of chess variants played on a board where the cells are hexagons instead of the traditional squares. There are many such variants; in this challenge we'll be focusing on Gliński's variant, which is the most common.

The board is composed of three colors (so that the same color doesn't share an edge), with the edges of the hexagons facing the players. The board has 11 files, marked by letters a through l (letter j is not used), and 11 ranks (which bend 60° at file f). Ranks 1 through 6 each contain 11 cells, rank 7 has 9 cells, rank 8 has 7, and so on. Rank 11 contains exactly one cell: f11. (If it helps, think of each rank as making a very wide "V" shape.)

Here is an example picture of the board, with the knight on the center cell. The cells marked with a dot are the legal moves of this particular knight. The knight moves in a similar fashion to "normal" chess, two-down-and-one-over. In hexagonal chess terms, it's an orthogonal move (across an edge), then a diagonal move in the same direction (the closest move to the same color). For example with the knight below, an orthogonal move "up" to the light brown is then accompanied by a diagonal move "up and right" or "up and left" to the nearest light brown. 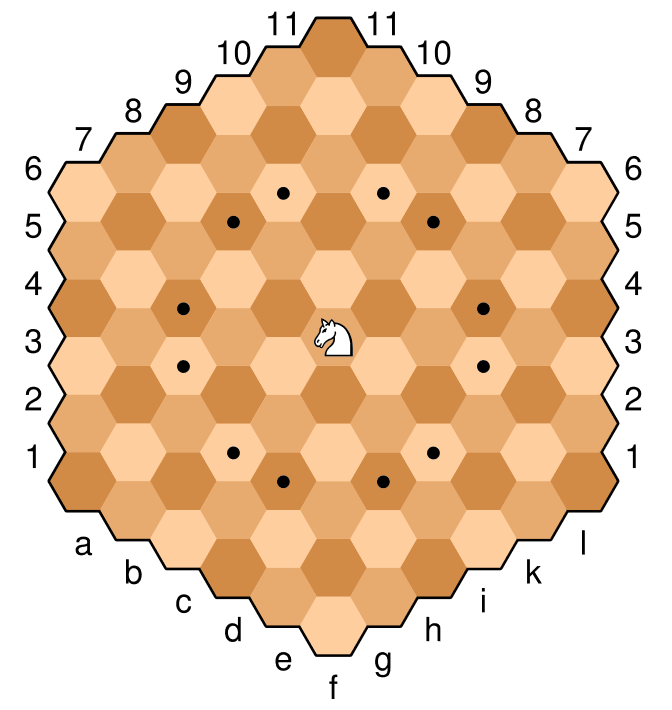 From the public domain via https://commons.wikimedia.org/wiki/File:Glinski_Chess_Knight.svg

A single input giving the starting cell of our knight. This can be as a single string "b6", as two strings, "b", "6", etc., in any convenient format. The input letters can be uppercase or lowercase -- your choice.

A list of the valid moves that a knight on that location can make. This can be as an array of strings, a single string with an unambiguous and consistent delimiter, separate strings by newlines, etc., whatever is most convenient. The output does not necessarily need to be in sorted order, and can be in either uppercase or lowercase -- your choice.

Takes the file F as a character and the rank R as an integer in currying syntax (F)(R). Returns an array of strings.

Below is the list of the move vectors in the Cartesian system:

We now need to check which target coordinates are actually located inside the board. This is done by testing X + Y and X - Y: 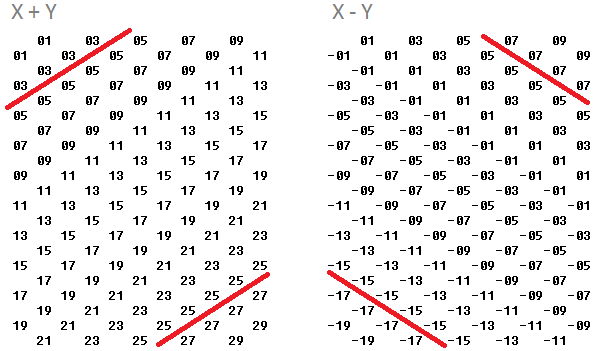 The coordinates are valid if all the following comparisons are true:

We should also verify that X is in [0 .. 10]. This is not done explicitly because s[X] is undefined if it's not, which eventually results in a falsy value that gets filtered out.

Finally the valid target coordinates are converted back to hexagonal chess coordinates, using the inverse of the formulas described at step #1.

Adjusts the coordinate system, although in a different way to @Arnauld's answer. The c subroutine takes advantage of the symmetry by trying the mirror reflection of each move. (I also tried rotating but that took too many bytes.)

I thought I'd port my Batch solution to ES6 to see how it compared... I didn't expect it to be that close...

a is used for both input and output

an imaginary third coordinate is the difference of the first two

if the input cell is translated to coords 0 0 0, a knight can move to those cells whose product of coords is 6 or -6

An anonymous function called with two strings for the file and rank; returns a list of strings.

Not the answer you're looking for? Browse other questions tagged code-golf chess hexagonal-grid or ask your own question.

6
Build a working chessboard
16
What is the Probability that a Knight Stays on Chessboard?
16
The knight's next tour
47
Knight on the Rim is Grim
16
Chess conversion
21
Where can the knight be in N moves?
24
Knight Distance
11
Recording xiangqi moves
20
A knight's graph on an N-by-N board
17
How many moves?