This is the inverse of Let's do some "deciph4r4ng"

In this challenge, your task is to encipher a string. Luckily, the algorithm is pretty simple: reading from left to right, each typical writing character (ASCII range 32-126) must be replaced by a number N (0-9) to indicate that it is the same as the character N+1 positions before it. The exception is when the character does not appear within the previous 10 positions in the original string. In that case, you should simply print the character again. Effectively, you should be able to reverse the operation from the original challenge.

The input string "Programming" would be encoded this way: 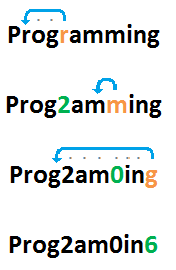 Hence, the expected output is "Prog2am0in6".

A fairly simple regex substitution. We match each character and try to find a copy of it 0-9 characters before it. If we find it, we replace the character with the number of characters we had to match to get to the copy.

The results don't quite match the test cases, because this one uses the largest possible digit instead of the smallest possible one.

Saved 3 bytes thanks to ETHproductions with the brilliant p=/./g instead of p={} (inspired by Neil)

Thanks to Laikoni for golfing 6 bytes!

The function % keeps the partially processed string in reverse in its second argument, so it's able to search the first 10 elements of this string for occurences of the character it's examinating. The submission consists of the unnamed function (%"") which calls the previous function with the empty string as its second argument.

Some explanations:
The goal is to replace a non-digit character (\D but it correspond to the backreference \1 in my regex) that is preceded by less than 10 characters (.{0,9}) and the same character ((\D)...\1) by the length of the .{0,9} group (length$2). And redo while characters get replaced.

Iterates throught the string in reverse, and builds a new string with the correct numbers inserted.

Since the function creates a copy of an input string, the maximum size of input is 98 characters (more than enough to fit the longest test input). Of course, this can be changed to any other value.

-1 byte thanks to Kevin Cruijssen. I always enjoy an excuse to use the goes-to operator.

No string.h import, works w/ warning. If this is against the rules, I'll pull it.

Not the answer you're looking for? Browse other questions tagged code-golf string cipher or ask your own question.