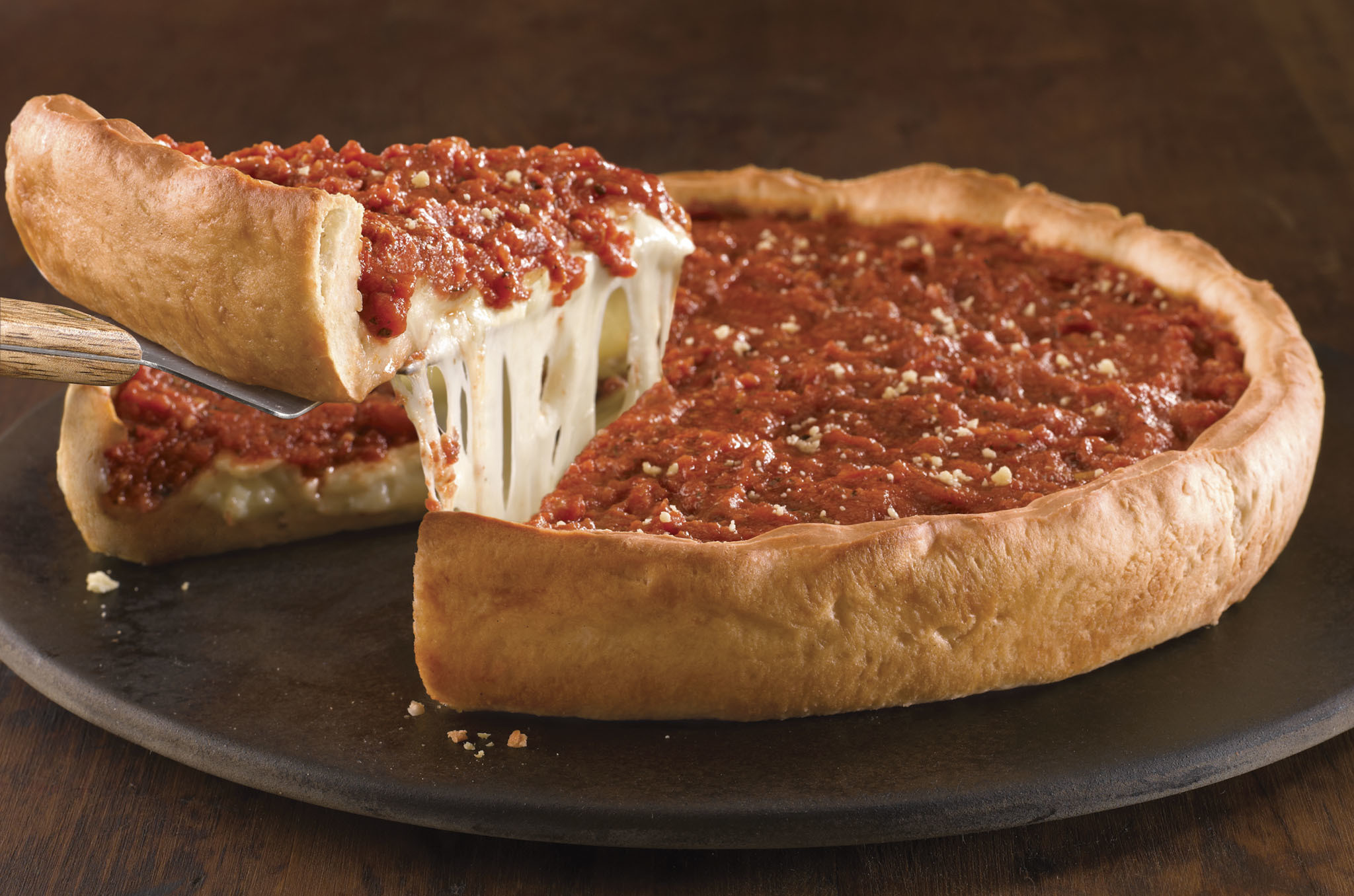 As you can see, there is a layer of crust on the bottom and surrounding the rest of the pizza.

How to make the pizza

The crust is made of two layers. The first layer will be n tall and n*3 long. Length is the number of characters (including spaces) in the highest line. So given n is 1, the first layer would look like this:

Now for the second layer of the crust. It will go outside the first, inner crust so therefore, it will be n+2 characters tall and (n*3)+6) characters long. Given n is one:

You would then match up the two highest pairs of \/ with each other for the inner and outer crust. In n is 1:

If done correctly, it would look like a V without the tops with a one character difference between each layer. Speaking of tops, the crust will be joined together by a pair of /\, separated by a line of underscores (n*3)+2 long to complete the crust and pizza.

Input the size of the pizza.

Print part of the outer crust base.

Print the outer crust left side.

Print part of the top crust.

Print the inner crust left side.

Print part of the inner crust base.

Reflect to complete the pizza.

Note that modern additions to Charcoal shrink the size down to 31 bytes:

Try it online! Link is to verbose version of code.

The whole pizza is very repetitious so the r function (designed as a tagged template literal) repeats the first character of its input n times. This handles the top and bottom two lines of the pizza. The middle is repeated by replacing a string of blanks; the $` and $' subsitutions automatically correspond to increasing and decreasing numbers of blanks thus positioning the \ \ and / / appropriately.

-2 bytes by substituting repeated values with variables thanks to @KoishoreRoy

Basic idea is I have function handles to print everything, and then I just pretty much brute-force it. The one for loop is for the n layers between the very top and the bottom of the inside layer. The repetition of (spaces) and _ is done using arrayfun, with array inputs. Will try to think of more interesting ways to do this if I get more time later.

Takes input from STDIN; run with -nR or order a family pizza.

Add a f= at the beginning and invoke like f(arg).

Note: All line breaks are necessary!

The code first declares an Array a. It then declares w and u having the value of whitespace and underscore respectively. Then, it declares a String variable to hold the value of the crust (which can be computed by /\+(n*3+2 underscores)+/\, as mentioned in the Challenge). After that, with a for loop and a Template Literal, the middle of the pizza is created (with each layer having i whitespaces at the starting and (n+1-i*2)+n+(n-1) whitespaces between \ \ and / /, where i represents the index of for loop). At the last, the bottom most part of the pizza is created ((i whitespaces)+\+(n+2 underscores)+/). All parts are joined together and output(ted).

If for some reason the snippet does not display the ASCII art correctly, have a look here.

t contains the left indent while s contains the inside; its _s are subsituted with spaces on the middle rows. l just exists to avoid some repetition.

Since, (as usual) this contains lots of nasty non-ASCII characters and unprintables, here is a hexdump:

Way too long. I'm going to try another approach.

Builds the string line-by line. Nothing too crazy.

Well, this is actually longer than my other solution at the moment, but I think it's more golfable:

11
Build a script to generate the Deep Note
6
Align a horizontally-aligned, right-angled ASCII shape along a diagonal
16
Cut a pizza into identical slices
48
Print a Lego piece
23
How to Draw Melting Icicles
17
Make me a pizza
21
Build this pyramid
24
Drawing a tree from an array