When will Brexit happen?

Well, Brexit happened. And Sky News, being the geniuses they are, have decided to create a countdown on the side of a bus. 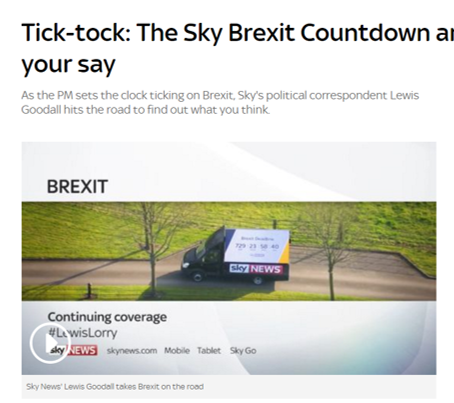 Your job is to do something similar. The UK leaves the the EU on 31st of March 2019 and you have to create a digital countdown for this that changes every second (with a 0.05 second deviation allowed).

Your program should take absolutely no input. It is banned!

It should output the time until Brexit in the format ddd:hh:mm:ss. Leading and trailing newlines are allowed but the display should stay in the same place each time. It should look as though it is actually decreasing in place. As pointed out by @AnthonyPham this doesn't mean printing enough newlines to "clear" the screen, this means that you must actually clear the screen.

as they're on more than one line.

The countdown should not be hard-coded and should be able to run at any time before Brexit finishes and still produce the correct result. When a new day is begun the hour should follow the below format

NB: I think I have everything but I didn't post this in the Sandbox, otherwise the timing could have been off. Feel free to post any suggestions for improvements because it isn't perfect.

Running this with sleep adds 8 bytes, but the input is mostly invisible if it is run without them, version (63 bytes) with sleep:

for() is an infinite loop, and within that loop..

cls to clear the screen,

this will display negative time after brexit.

Output is to cell A1 in the active Excel sheet.

This is not the shortest answer but the result gives a very nice feeling of doom, I think. I originally tried to send the keystrokes Ctrl+A followed by DEL and then whatever the time was but the refresh rate was too slow and it would destroy whatever environment you were in. Instead, then, I went with the GUI. It turned out to take less bytes to completely destroy the window and recreate it than it did to update the control over and over so I went with that. It's a nice effect.

Saved 2 bytes by using a carriage return instead of backspaces

Can't be run on TIO for obvious reasons.

It rewrites the display constantly in an infinite loop so the text kind of flashes in and out (at least in my console), although it only actually updates the time once per second.

This 70-byte version only prints once per second:

Thanks to Bob for saving 57 bytes!

Thanks to Bob for saving another 47 bytes!

Thanks to Martin Smith for saving 4 bytes!

Relies on time returning number of seconds since 01/01/1970, which is the case for me (using Clang/GCC on macOS) and should be the case for most UNIX stuff.

Uses bash terminal escape sequences to move the cursor around (<esc>[1A moves the cursor up 1 line). It would be nicer to be able to simply use \r, but printf won't flush until it sees a newline, and flushing it manually takes a lot more.

Probably the most CPU intensive countdown I've ever seen. Runs in a hot loop to make sure it's always as accurate as can be. If run after the deadline, it will produce some pretty weird stuff (negatives everywhere!)

I would not have figured out the \r trick without help from the other C# answers here.

For anyone looking for further improvement, you can also put the Write() expression inside the for loop. Seems like I should be able to save a byte somehow here, because that saves me the semi-colon for that statement, but it works out to the same number because you can't have a fully empty body:

Basically one of the Python submissions, with some improvements. We just emit an "\r" to go beginning of the string before re-rendering. And for the string format of "%03d:%02d:%02d:%02d", we really don't care about the width on the first specifier… so we can just do "%02d"*4, and emit a backspace and a space to clear the extra unnecessary colon.

Also, I found a two-character shorter print: $><<. $> is a shorthand global for $defout, which is the output stream for print and printf and defaults to STDOUT. IO#<< writes the right hand side of it to the stream. How is that two characters shorter? Well, I can now omit the space that led before the parenthesis wrapping the format string.

At this point I genuinely think there is no possible way to shorten this program further in Ruby.

Edit 2: I've tried playing around with factoring out minutes, and dividing the UNIX timestamp by that constant, but it doesn't actually wind up saving any bytes. :(

Edit 4: Saved 3 bytes thanks to @EricDuminill. He used floats, but rationals work without loss of precision!

Edit 5: Array#* as an alias for Array#join, with the Ruby ?-syntax for individual characters!

2 bytes shaved off thanks to @muru, and 2 off earlier thanks to @This Guy.

At 2 bytes more, a bit more CPU-friendly version that does a pause (sleep) every second:

Try this on MATL Online

737515 is "31st of March 2019" represented MATLAB's default epoch format - number of days from January 0, 0000, optionally including a fractional part to represent the time of day. (I tried to shorten this by calculating it somehow, but its only factors are 5 and another six digit number (147503), and I couldn't figure out a way to do it in less than 6 bytes.)

Assuming your HP48, or similar, is setup with correct (UK) time and date, mm/dd date format, and 24h time format:

I was surprised to be able to save 2 bytes by removing spaces around ":". 1.1 is the shortest valid date, later dumped by SUB. Be careful with emulators, the time may run faster or slower (or not at all) than your wall clock. With a real HP, you can stop this program by pressing the ON key … or wait for empty batteries.

Saved 7 bytes thanks to @TheLethalCoder & by not factoring

Saved another 5 bytes by concatenating

This is my first golf, so I'm probably missing quite a few tricks, but here you are regardless.

As for @chocochaos' PHP answer that would otherwise trump this, I believe it is flawed for reasons I have explained in my comments, but as I'm new here I might be wrong. Or I'm just a newbie :)

Was longer before I realized I could precalculate the end time. Sometimes it pays to be a bit late to the game and get ideas from others.

I grew up in Ireland about half a kilometre from the border. Apart from a "Welcome to Fermanagh" sign and the road markings changing you wouldn't know you'd entered another country. Used to cross it twice on the way to school.

Nothing omitted, full program. The program compiles in gcc on Ubuntu. The countdown will not show a long trail of print statements because of the system call to clear and halts when the countdown reaches 0 seconds.

Not the answer you're looking for? Browse other questions tagged code-golf date or ask your own question.

46
Tips for golfing in PowerShell
33
How many countries are in the European Union?

14
Minimalist Hex Clock
17
Convert the Time to a String
19
The Letter E with E
45
Big Ben goes BONG
25
It's time for a clock challenge!
23
Implement a Stopwatch
13
When will SE be down?
7
The Microwave Challenge