The output should print the quickest way to deliver goods to every destination in the form A -> C -> D -> C -> A (For every output, the reverse of will also work. You only need to print one solution). Alex ALWAYS starts at A and must always return to A at the end (as A is where he lives). Here are the outputs for the sample inputs above:

code-golf graph-theory
Share
Improve this question
edited May 2 '13 at 6:26

Edit: Shortened according to Volatility's suggestion. I'm amazed that it gets more readable and Pythonic the shorter it gets.

This a commentary rather than an entry.

If I am not mistaken, the sample data appear to correspond to an impossible set of distances between cities located in the plane.

The inter-city distances might be represented by a matrix

or, perhaps more conveniently, by a graph in which the edge labels are distances. (Note: The graph is not a geographical map.) 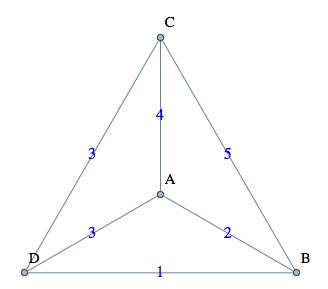 The figure below arbitrarily sets A at the origin of a coordinate plane. The distances from A to B, C, and D constrain the latter three cities to positions on circles with center at A and radii of 2, 4, and 3 units. We may arbitrarily place B at (0,2) and continue. Now, because D is one unit away from B and 3 units away from A, it must lie at (0, 3).

But there would appear to exist no position in the plane that is simultaneously 4, 5, and 3 units away from A, B, and D respectively. 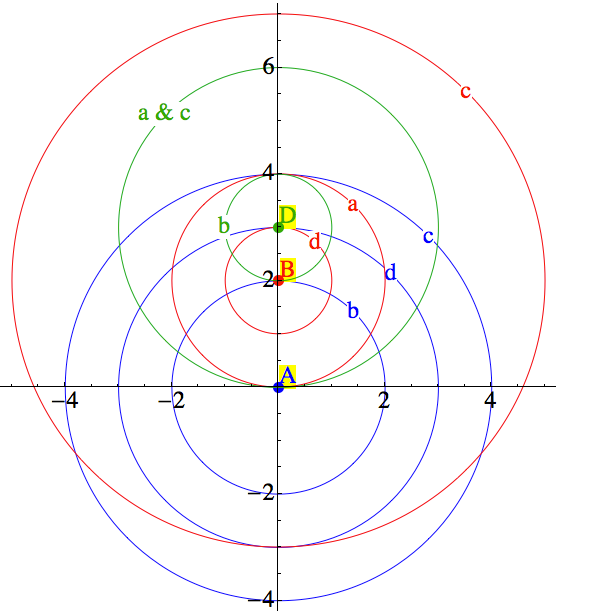 The impossibility of the data would not detected by most approaches, although I suspect that a multidimensional scaling analysis would return a stress value that should raise a flag.

The algorithm itself is brute-force and inefficient. Don't use for maps with more than 10 or 12 cities. Three words: O(n!)

6
Hamilton is coming to town