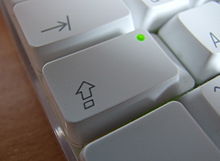 This uses Matlab's ability to call Java classes. The Caps Lock light is blinked in a loop by programmatically pressing and releasing Caps Lock.

87
Print a Tabula Recta!
61
Tips for golfing in Bash
9
Blink the webcam light!

25
Android Lock Screen
21
Find the Semordnilaps
46
Halloween Golf: The 2spooky4me Challenge!
24
Find the center
45
Product over a range
30
Subsequence Substitution
81
Output the sign
24
Round up my number
11
Amount Of Potential Keys That'll Fit The Lock