This challenge is to output to your terminal, window, canvas or screen the numbers zero to 10 inclusive. Each outputted number must be shown as a 4-bit wide nybble, so zero must show as 0000 and so on.

You may separate each number outputted with a space, comma or carriage return. Smallest solution wins but the numbers can be displayed in any order you like as long as there are no repeating numbers in your sequence.

Entries in low-level binary languages need not worry about the comma or white space separators if it is not possible to output with commas or white spaces (i.e., the standard output is limited to binary only, or your solution is for an early computer kit such as the KIM-1 which has a limited digital display).

I'm sure this can be shortened--it's pretty much my first BF golf.

Try it online! Assumes a tape infinite in both directions, like the interpreter at TIO uses. An interpreter where < at the left end of the tape is a no-op would save three bytes.

More than half of the code (the first 77 bytes, to be precise) is spent initializing the tape. The steps go like this:

The cells initialized to 1 store the bits of our number plus 1: 1 represents a zero bit and 2 represents a one bit.

The initialization phase ended with the pointer on the 11. Now we use this cell to run 11 iterations of our loop:

Different method than other CL submission.

2+5=7 bytes removed thanks to PrzemysławP.

I used to do the same with 123456789A, but as noted by PrzemysławP, the order does not matter and we can save some bytes. This is because with the original order, the leading zeros would be done as padding and would not be separated into groups of 4 digits; here, by starting with 1000, we don't need any padding. In addition to that, I also removed the mincol argument (53) because I don't need to specify the size of the number anymore.

The documentation for format (see above) is detailed for ~D (decimal base) but the same applies to other ones (hex ~X, binary ~B, octal ~O, custom ~R). Note that for floats there are other arguments.

The most general format is ~mincol,padchar,commachar,commaintervalD, but note that the two last arguments, commachar and commainterval are only meaningful if D has a colon-modifier :D, which by default separate digits by groups of 3 (commainterval is a custom value, instead of 3), inserting the commachar character between such groups, by default a comma.

The mincol argument is one that is found in other format directives and specifies the horizontal space allocated for the thing being printed. When the actual size required is smaller, a padding might be applied (left or right, or both for some directives). The padding fills the remaining space with padchar, a character. When the actual size is bigger, the layout might not be pretty but the object is printed fully.

More precisely (from the above link):

~D Decimal. An arg, which should be an integer, is printed in decimal radix. ~D will never put a decimal point after the number. ~mincolD uses a column width of mincol; spaces are inserted on the left if the number requires fewer than mincol columns for its digits and sign. If the number doesn't fit in mincol columns, additional columns are used as needed.

~mincol,padcharD uses padchar as the pad character instead of space.

The @ modifier causes the number's sign to be printed always; the default is to print it only if the number is negative.

The : modifier causes commas to be printed between groups of three digits

the third prefix parameter may be used to change the character used as the comma. Thus the most general form of ~D is ~mincol,padchar,commacharD.

X3J13 voted in March 1988 (FORMAT-COMMA-INTERVAL) to add a fourth parameter, the commainterval. This must be an integer; if it is not provided, it defaults to 3. This parameter controls the number of digits in each group separated by the commachar.

Note that the padding characters are not grouped, as explained above. For example, the zeros in front of the numbers are not separated:

... there is no easy way to combine format parameters to output:

... that's why I first added the zeros and a comma explicitly in the answer. This is not necessary anymore.

For each number, print one bit at a time by bit shifting then masking with &1.

I am never golfing in Java again...

Copy and paste the above text into WinVice, for instance. Just about fits onto 80 characters on a Commodore 64.

Of course this may be minimised and further obfuscated. Explanation:

The DEF FN command in line zero is a simple function which accepts one numeric parameter. This will give the algebraic sign the number passed to it as a parameter, in this case is ANDed with the value B (declared elsewhere, but becomes global once declared).

Line 1 starts the loop counter I

Line 2 sets the value of the 3rd BIT.

Line 4 gets the STR$ value (string value) of the function FN B(I), this is then passed to the RIGHT$ command as CBM BASIC auto-pads outputted numbers with a white space, so we get the last character in the string created by STR$.

Line 6 moves the J loop up one.

Line 8 moves the I loop up one.

I've 'nested' the listing in the example to better show the loop and loop order. 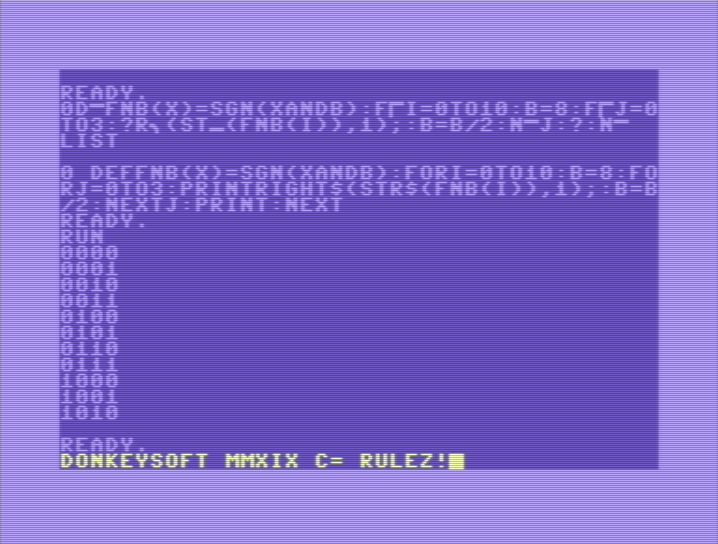 The first four bytes could alternatively be A╒E+:

share|improve this answer
answered Jan 3 at 14:49

share|improve this answer
answered Jan 3 at 16:00

Not the answer you're looking for? Browse other questions tagged code-golf kolmogorov-complexity binary or ask your own question.

5
Find all numbers between 2 and 100 co-prime to a given number
64
Write lines in detention
20
Convert numbers to binary… but you're allowed to use twos as well
18
From 0 to 2^n - 1 in POPCORN order
30
Decompose binary into alternating subsequences
12
All Binary Combinations to Decimal
18
RGB Gradients Generation
20
Display a Digital Clock
24
Plant a binary forest!
9
Eyeballing the bits