Check out this challenge:

(The competition has already ended, so I'm just curious about the Python solution, which the organizers refused to reveal, so this is not cheating in any way.)

For reference, my solution:

Edit: regarding Ari's comment about the 66 byte Python solution being a 'hack', I don't think that's exactly what happened. I've noticed several times that the submitted language is displayed incorrectly. For example here: Baconian Cipher. This challenge may only be submitted in Brainf_ck, yet the second ranked solution was submitted in Python 2 (interestingly enough, spot 23 is also Python 2. If I were to speculate, I would say that if the language information is missing from a submission for whatever reason, it seems to default to Python).

I suspect that a similar error may have occurred here, and that the shortest Python solution submitted during the challenge was actually 72 bytes.

Update: After speaking with a moderator, it seems that Ari was right: 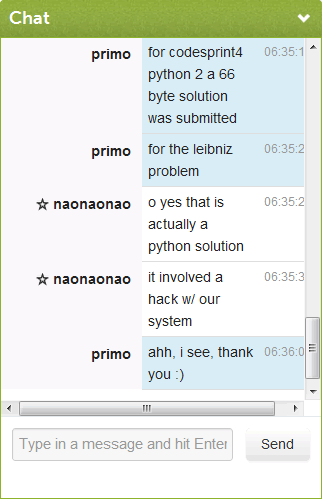 also prints only 12 digits of result, with loop and formatting

Not the answer you're looking for? Browse other questions tagged code-golf python pi or ask your own question.

22
Meta Golf Challenge
10
Return the last color of the input in Manufactoria
16
Base Conversion With Strings
31
Telegraphy Golf: Decode Baudot Code
31
Can I sweep the mines?
38
Don't give me five!
19
Island Golf #2: The Eccentric Hermits
24
Ice Golf Challenge