In Chess, it's possible for the game to end after 4 moves (2 each) with a Fool's Mate.

Your goal is to find the Fool's Mate of Halma: the 2-player game of Halma that minimises the number of turns played.

There are over 1056 board states, and I've seen the branching factor surpass 1000, so chances are no one will find the optimal solution. Instead, you're trying to find the best solution you can.

You should submit a list of moves, and any code you used to generate those moves.

Explanation of the Game

Halma is similar to Chinese Checkers, but played on a 16*16 square board. 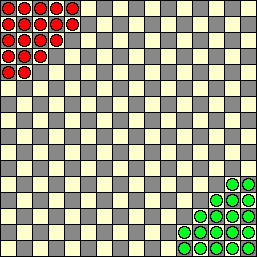 The goal of the game is to move all your pieces to the starting positions of your opponent's pieces.

On a player's turn, he/she may:

Here's an example to illustrate the 2nd type of move.

Submit a list of legal moves which result in the game ending.

Submit any code you used to generate the list.

You can use this python script to verify your moves. Use python halma_verify.py < file to verify moves in file.

The shortest game of halma is 49 moves

Proof there is no 48-move solution

Code used for this solution

Notice that the 47 move solution in the paper is for the army transfer problem, not for the shortest game of halma

I'll hopefully get to doing a proper writeup this weekend

Not the answer you're looking for? Browse other questions tagged optimization board-game puzzle-solver or ask your own question.

6
Optimal Othello/Reversi Move
12
Tic-Tac-Toe and Chess, with fewest [distinct] characters
16
Simulate a Game of Quagmire
10
Write the shortest game of alak
8
Coding hex board game
11
Printing the Cracker Barrel Game
9
Where can the cannon go?