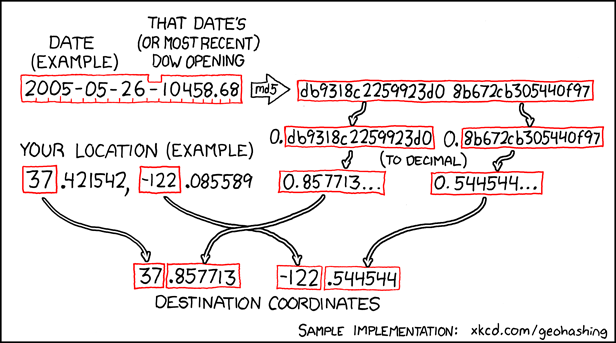 Given a date, the current Dow Opening, and your current coordinates as a rounded integer, produce a "geohash."

To make input easier, you can input through any reasonable structured format. Here are some examples (you may create your own):

Given your arguments, you must perform the "geohash" algorithm illustrated in the comic. The algorithm is as follows.

with negative numbers input and output with a leading underscore (i.e. _122 instead of -122).

Computes the MD5 hash with md5.new().hexdigest(), then performs the necessary transforms. I could save five bytes by using h instead of h[:16], but I'm not sure if that would affect the six most significant digits in the decimal conversion.

Ideone it! (substituting an eval() call for the input())

This is an unnamed closure.

Not the answer you're looking for? Browse other questions tagged code-golf math hashing or ask your own question.

17
An optimization challenge with strange coins