There are 3 nails in the wall. You've got a piece of string that is fixed to the picture frame with both ends. To hang the picture, you entangled the string with the nails. But before letting the picture go: Can you predict whether the image is going to fall, just by looking at how the string is wrapped around the nails? 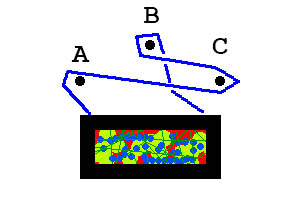 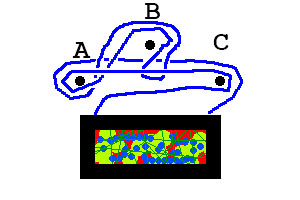 The first example from above will be encoded as BcA, the second example is encoded as CAbBac.

For the inclined reader: This problem is equivalent to determining whether an element of the free group - generated by the set of nails - is the identity or not. This means it is sufficient to repeatedly cancel substrings like aA or Aa until you reached a fixed point. If the fixed point is an empty string, this is the neutral element, otherwise it is not.

Like flawr's solution, this just repeatedly deletes adjacent uppercase/lowercase pairs and then checks whether the result is empty or not.

As for how one matches an uppercase/lowercase pair:

This might be the first time I've seen where MATLAB is actually shorter than Octave (by an entire byte)!

Try it the Octave-version online!

c=input('') asks the user for input. We define k='Aa' as a character array.

while k++<1e5: While loop where both elements in k are incremented each iteration, Aa, Bb, Cc and so on. The loop will continue until the largest element is 1e5, which should be sufficiently high for most strings. It can be increased to 9e9 without increasing the byte count.

We'll take the strrep function in steps, starting from the middle.

By using mod(k,64) we'll get the following when we reach the end of the alphabet (if we convert k back to characters):

As you can see, there will be some symbols in between, but then it will wrap around and start with the alphabet again, but now with the lower case letters first. This is a very short way to check both Aa and aA.

['',65+mod(k,64)] concatenates the numeric values from the mod-call, with an empty string, converting the numbers to characters.

strrep is used to remove elements from the string c and return it. It will search for all occurrences of k in the string and replace it with an empty string.

After 1e5 iterations we'll either have an empty string or a non-empty string. We check if there are any elements in c using nnz(c). We return not(nnz(c)), thus 1 if it's empty, and 0 if there are characters left in c

Minkolang's toroidal nature is leveraged here to eliminate the need for an outer loop. The general idea here is to check if the top two elements of the stack are 32 units apart (meaning they're an uppercase/lowercase pair), and if they are, pop both of them off. Since this is done "in realtime", so to speak, nesting of pairs is handled properly.

This is just a naive implementation that repeatedly tries to cancel adjecent letters until there is no more change, and then determines the result from that.

Try it online! or Verify all examples!

The helper function % takes an already-simplified string l, and prepends the symbol a before simplifying the result. If l starts with the inverse character to a, they cancel. Otherwise, a is simply prepended. Note that no further simplification is needed at this stage.

The main function f prepends and simplifies each character in turn via a foldr. Then, it checks whether the result is empty.

To check whether two characters are opposite cases and so should cancel, see if their ASCII values differ by 32. Each element is processed by fromEnum before being passed to %.

Unnamed function taking an alphabetic string as input and returning True or False.

The heart of the implementation is creating a function that deletes any cancelling pair, like "Pp" or "gG", from a string. The expression {Join[a=Alphabet[],A=ToUpperCase@a],A~Join~a} produces an ordered pair of lists of characters, the first list being {"a","b",...,"Z"} and the second being {"A","B",...,"z"}. Then #<>#2&~MapThread~ produces a list where the corresponding elements of these two lists have been concatenated, that is, {"aA","bB",...,"Zz"}. The fun expression ""|##&@@ then (through the magic of the argument sequence ##) produces a list of alternatives "" | "aA" | "bB" | ... | "Zz"; finally, StringDelete[...] is a function that deletes any occurrence of any of those alternatives from a string.

It now suffices to repeatedly apply that function to the input string until the result doesn't change, which is accomplished by ~FixedPoint~#, and then test whether the result is the empty string with ""==.

Unlike .NET, JavaScript has no way of turning off case sensitivity in the middle of a match, so instead we have to find all substrings of repeated letters case insensitively, and then delete any mismatching pair of adjacent characters, which by this point must be an upper/lowercase pair.

The (??{ is the start of the generated regex.

The $& variable will contain the entire matched string so far, which in this case is just whatever . matched.

The ^ operator does either numeric xor or string xor, depending on the values of the operands. In this case, it will be string xor.

The ' ' is just a string containing a space, which conveniently has the ascii (or unicode!) value of 32. When a space is xor-ed with a char in the range a-z or A-Z, it will change from upper to lower case or vise versa.

The }) is the end of the generated regex.

1 while s/whatever// will repeatedly search for a pattern and replace it with the empty string.

$_ is the default variable. This variable is what perl does fun and exciting stuff upon when you don't specify another variable. Here I'm using it to return a truthy or falsy value, since a zero length string is false, and a nonzero length string which does not equal "0" is true. I'm also assuming that the input string was originally placed in it.

Takes a long time to run on the longer false cases because of backtracking.

Try it online! Or verify all test cases (it takes a while).

Not the answer you're looking for? Browse other questions tagged code-golf string decision-problem abstract-algebra knot-theory or ask your own question.

11
SPOF Picture Hanging
6
Find all strings at distance k
13
Tension on a Graph, Part II: A Rubber Band
35
Letters, Get Moving!
23
A Rather Knotty Conundrum
33
Un-de-duplicating strings
37
Let's do some “enciph5r47g”
23
Can Jimmy hang on his rope?
21
Compatible strings