The two values given by the formula are the upper and lower bounds of the interval. nS and nF are the number of successes and failures, respectively, and n is the total number of trials (equivalent to nS + nF). z is a parameter dependent on the level of confidence desired. For the purposes of this challenge, z = 1.96 will be used (corresponding to a 95% confidence interval)1.

Given non-negative integers nS and nF, output the bounds of the Wilson score interval.

Uses the fact that preceding ## by a number results in the product of the two arguments, while +## results in their sum. Also uses the fact that products and sums automatically thread over lists, so that {-1,1}√(...) implements the ± in the formula. Defining the constant s = z^2 instead of z itself also saved a couple of bytes. (Mostly I'm just proud of saving a byte by noticing that 1.4^4 is exactly 1.96^2!)

This function actually returns an or-junction of the lower and upper bounds; for example, if called with the arguments 100 and 0, it returns:

It's a non-traditional output format to say the least, but no particular format was specified, and both of the required values are present.

AH GOD this one's a mess. Here's the unwrapped version:

All those ys are to slow down the second IP so that it arrives at the Transfer point at the right time (i.e. second). This shoves the top 3 items of the one pointer over to the other (the setup to this action is depicted below). 'Ä1C, generates z by dividing character 196 by 100 (dup, square, dup, div 2, dup, div 2...). The everything-else is just a bunch of math and stack manipulation to shove future values down the stack until they're needed. For the most part, they end up in the right order and its only until r4s{++} that we have to reverse the stack and rotate the whole thing to get the values we want next to each other next to each other.

There's probably room for improvement, but its complex enough that I can't see it. Heck, had inadvertently read "z" instead of "n" in the original formula at one point and fixing that was rough.

I had to pull out notecards and simulate the stacks in order to make sure it was correct: 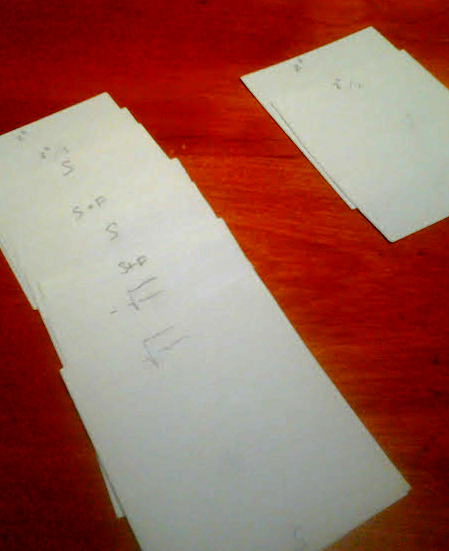 Every single one has a value on both ends due to how many variables there were (eg. I'd have one with S and one with F, I'd pop them both, flip one around and add the S+F that was on the other end to the top of the stack). You can see one of the sqrt(...) cards has an S on the lower edge.

Output is a complex integer with the interval stored as the real/imaginary part.

Returns an array of type double of length 2, can probably be golfed more.

Expects the input to be present on the stack at execution start, in the order n_s, n_f. Try it online!

What a stupid language to attempt this in...

As ><> lacks an exponent or root operator, the square root is calculated in the second line of code using the Babylonian method, to an accuracy of 1e-8 - for every example I've tried, this is accurate to at least 10 decimal places. If this isn't precise enough, the bounds can be tightened by adding more :* in the second line, shuffling things around to keep the mirrors in line.

Output is in the following form:

Input is as a list of values, [n_s, n_f]. Output is [upper, lower] Try it online here, or verify all the test cases at once here.

CommunityBot
1
answered Oct 4, 2018 at 10:01
user58988user58988
\$\endgroup\$
Add a comment  |
Welcome to Code Golf and Coding Challenges Stack Exchange! This is a site for recreational programming competitions, not general programming questions. Challenges must have an objective scoring criterion, and it is highly recommended to first post proposed challenges in the Sandbox.

19
A simple DNA simulator
11
Solve a Linear Equation
13
Identify the Conic Section
26
Approximate Brun's Constant
14
Average distance of two points in unit n-dimensional hypercube
26
Reciprocal of a number (1/x)
25
Approximate the plastic number
5
Compute the result of an equation, but with selectable operator precedence
44
Shift right by half a bit
20
Prime Modified Z-Factorials