In functoid there is no support for negative integers since numbers are handled as Church numerals. This solution redefines numbers in a way that supports negative numbers (please refer to the explanation):

Try it online! (Here is an input generator)

The definition of negative numbers extends the Church numerals by simply introducing another lambda abstraction that encodes the sign of a number (the first argument, ie. x3). Here is how the numbers -2,-1,0,1,2 would look like in this notation:

Now for the explanation of the above code: The characters < will change the direction to left, this saves us four bytes but makes it more difficult to read.. Here's how the code would look like without doing this:

The combinator BbB ensures that K0 and K2 get grouped as one expression each, here's the more verbose code:

The command | will set the direction down iff the current expression evaluates to 0 and up in the other case.

It might look like the above extension was done just to make this task easier, however this is not the case. In fact most definitions in the untyped (or rather uni-typed) lambda calculus are made because they simplify a lot of operations that one could be interested (such as Booleans or the Church numerals themselves).

As an example the function abs could be "implemented" by just applying the identity function to such an extended numeral which will get rid of one lambda abstraction (and in case of a negative number, keep the absolute value as is).

If you're interested, here is an article that talks more about this definition which is worth a read.

Anonymous function that takes input as a number, n, and output to STDOUT

... is the variable that represents arguments in lua, tonumber(...) converts the first argument to a number.

also in lua a and b or c is a structure that returns b if a is truthy or c if a is falsy, you can nest this structure as well

Added for completeness. It is a builtin, but all built-ins starting with a colon in Stax is actually a macro defined using other Stax operations.

Strange spacing around the ternary options, I know, but this was the shortest way.

Requires the i flag for integer output. Input must be appended to the code on a separate line. This is equivalent to the C code (n>0)-(n<0). Try it online!

Alternatives with the same bytecount:

This might be the shortest solution without a builtin that does the problem for you (I'm looking at you, Jelly.)

That's all right, isn't it?

For those who are tired of the old way of introducing these answers [I'm looking at you a'_' ...(ಠ ͟ʖಠ)], I'll put the ScratchBlocks Syntax first: 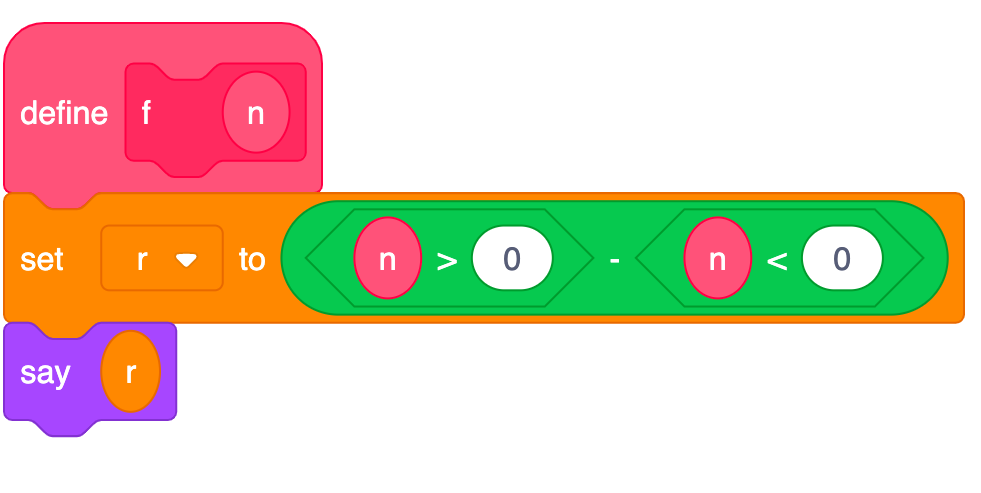 I decided to use a function instead of the old when gf clicked approach because that means I don't have to deal with having an ask() and wait next.

Try it not online but on Scratch

Does a conditional checking over x/abs(x).

-3 bytes to due porting the idea behind the Io answer.

For some reason, my edit history didn't save this old approach.

Uses a different approach from other python answers

Oh, yes, I am learning J. I want to golf in android and building my own golfing language is hard, so I started learning J.

COW can't compare numbers so N is stored in two cells, (if N is not 0) in turns one will be increased and the other decreased. When eventually one of them reaches 0, the loop will stop.
The sign will be in the next cell.

I've tried other permutations of memory cells but this seems the best.
Setting [3] (a constant) inside the loop is needed to manage the case N=0.

Domenico ModicaDomenico Modica
1,13922 silver badges1616 bronze badges
\$\endgroup\$
Add a comment  |
Prev 1 2 3
4
5 6 Next
Code Golf Stack Exchange is a site for recreational programming competitions, not general programming questions. Challenges must have an objective scoring criterion, and it is highly recommended to first post proposed challenges in the Sandbox.

94
Tips for golfing in Java
33
Count up folks!
52
In how many bits do I fit
91
Create a programming language that only appears to be unusable
15
Name of Frankenstein's Monster
33
Build a golfing language with me

42
Halloween Golf: The 2spooky4me Challenge!
25
Output a sound of a certain frequency
82
“99 Bottles of Beer”
23
Find the center
41
Product over a range
30
Subsequence Substitution
67
Print/Output the L-phabet
34
Could you please stop shuffling the deck and play already?
17
Print last inputted byte
22
Round up my number