You need to produce output that is non-deterministic.

In this case, this will be defined to mean that the output will not always be the same result.

Prints newlines to the terminal. You'll probably have to leave this one overnight, as there is a delay of 5-15 minutes (it's random!) between each newline. Note that while you can determine what is being printed, you can't determine how often it's being printed.

Input is marked with a >>. The command prompt is the empty >>.

Assuming a system with only TZ_INFECT installed...

Note that I'm using a custom client that prefixes [BROADCAST] to all broadcast events.

TZ_INFECT is Intercept's malware generator. We can generate a bitminer by running malware <name> bitminer. This will create a new piece of software with the given name of type bitminer

We then install the bitminer: software install <index>, where index is the 0-based index of the software as given by software list. This is why I made sure the only piece of software on the system was the malware generator. This places our new bitminer at index 1.

Note: the newlines are harder to detect using the official game client, but you can see them by running a command and watching the newlines slowly push the resulting output off the screen.

Screenshots coming in a few hours while I wait for the output.
After 20 minutes (the [BROADCAST] is a newline): 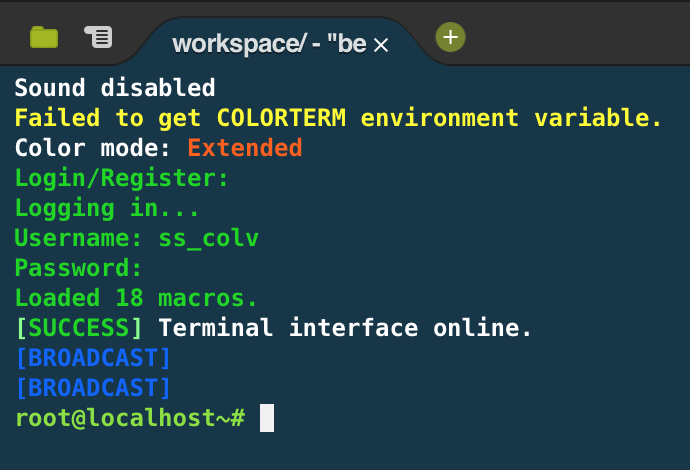 This pushes a random number onto the stack and then outputs that number by default.

The obvious answer. rand is a core function that returns a floating-point number between 0 and 1 (exclusive) when called without any arguments.

I don't think it gets any shorter than this in Clojure.

Prints a single random byte. FF creates a marble with value 255. That marble falls through the random number generator ?? which replaces the marble's value with a random value between 0 and 255 inclusive. When the marble falls off the bottom of the board, it gets printed to STDOUT as a byte.

Two options how to generate a random number with the shortest code.

Randomly prints either nothing, or the digit 1.

This turned out surprisingly difficult. At first I thought I cold use the .hash attribute of all objects (corresponds to Java's .hashCode() when running in the JVM), but it turns out that most objects I can write in a literal way have their .hash attribute overridden, returning a deterministic value.

The base class Basic, which has the Java-like hash code implementation (assumedly based on the memory address?) is abstract, so I can't use Basic().hash (nor Object().hash – also abstract, and here even the method is not implemented). So let's create a new class, create an instance and take its hash code?

This always outputs 1116094714 whenever I execute this program. (Adding other statements which allocate memory before the print line changes the result – still deterministically, though.)

Ceylon also supports anonymous classes as object expressions. Those can extend classes or implement interfaces and have own code, but the most minimal variant is just object{}:

Another idea was to use the hash code of a class or function reference. (Those are normal objects, I thought.) But trying to use run.hash (or f.hash) gives a compiler error:

error: direct function references do not have members

We can work around this by assigning this function reference first to a value, which will create an object of a (hidden) anonymous class:

So, using any hash code will not bring us forward (and I suppose that the other JVM answers here with .hashCode() would have the same problem on my JVM implementation). Same with printing an object with the default .string implementation based on .hash.

There is no random number facility in ceylon.language, so using either ceylon.random or Java's java.util.Random (or java.lang.Math.random()) needs an import, which increases the size more than I want to tolerate for a codegolf answer. Here is an example:

So let's look at what we have in ceylon.language. There are four top-level objects which allow access to the environment:

Both will change with each call of a program, and the latter one is shorter.

So here we have an anonymous function returning different values:

If we want a named function, its definition can look like this:

(It actually returns Integer, but that is one character longer than Object.)

Explain: the PIDs returned are not going to be the same each time.

(If you give it a positive integer argument m [which must be strictly less than 65536, not that you'll ever reasonably need to go nearly that high] it will produce a random rational of the form n/2^m, where n is an integer on[0,2^m-1])

Must be run on an interactive shell

Gets the current working directory.

Gets the current process identifier

Demo: Go to https://www.tutorialspoint.com/execute_tcl_online.php and in the green area, type

Outputs a random number from 0 to 9.

The most random I could get for 6 bytes

I could change R to R-9 to double the randomness for 2 extra bytes.

Prints a random number. The spec does not give any details on what number should be. The last statement can be omitted if you don't mind the code giving an error after printing the output.

Gives infinite-length output. Each byte of output is independent, and is either NUL \x00 or '@' \x40.

For each of these programs, the letter a through h defines the index of a bit of the output, and ? produces a random value to set it to. The two elements may be provided in any order; they must only touch each other on a 2D plane.

Try it online! The TIO includes the -cN flag. This flag is not necessary, but cuts off the program after N bytes. Try without the cutoff if you wish, but TIO's limit is at 128KiB.

-1 byte thanks to @JoKing

Takes a reference to a temporary 1 and prints the address.

Try it online! (requires the -A const_err compiler flag)

This is a bit sketchier, and I'm not sure whether it counts. The non-deterministic output is to STDERR, and the non-determinism arises only based on the value of an environment variable.

This program attempts to compute 0 - 1, where both integers have type u8 (the default is i32, which won't cause an overflow because it's signed). By default, Rust compiles the file in debug mode, in which arithmetic overflow causes a panic instead of wrapping. When a program panics, it will print a stack trace if the environment variable RUST_BACKTRACE is set to 1, hence the non-determinism.

Either outputs "a" or nothing.

I can't even remember how this one works.

Shellscript (as implemented by ttyrec), 0 bytes

OK, here's a version of this idea that uses an interpreter that can actually be programmed with.

The ttyrec command by default just passes everything it sees on standard input to a shell, and thus obeys our definition of a programming language (it's Turing-complete, because bash is; it's basically just an alternate front-end to bash, and so is basically a shellscript interpreter that can be used to program with). However, it also creates a file ttyrecord containing a recording of the shell's output, and that file starts with the current time, in binary (and is also affected in some ways by the system's CPU and swapping load, as it tries to separate the output into frames). Thus, it produces a file with nondeterministic content as output.

Not the answer you're looking for? Browse other questions tagged code-golf random or ask your own question.

131
Shortest code to produce infinite output
58
Duck, duck, goose!
55
How to randomize letters in a word

42
Halloween Golf: The 2spooky4me Challenge!
82
“99 Bottles of Beer”
41
Product over a range
30
Subsequence Substitution
22
Print the Nth non-palindromic number
74
Output the sign
17
Print last inputted byte
21
Do you make me up?
22
Round up my number